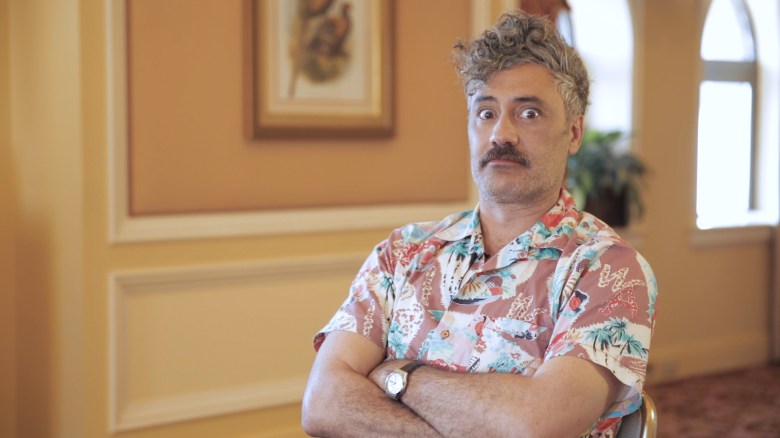 Taika Waititi, the 44-year-old actor-writer-director, comes from a small town of a few hundred people in New Zealand where film was not on the list of job opportunities. He went on the dole when he left high school, put on plays in his 20s, and was over 30 when he started making shorts (Oscar-winner “Two Cars, One Night”) and directing television and such acclaimed features as “Boy.”

Back in 2010, Waititi fell in love with his mother’s description of “Caging Skies,” a 2004 book from New Zealand author Christine Leunens, which he decided to adapt into a screenplay, focusing on the first part of the story about a ten-year-old Nazi youth, to which he added a new character, imaginary friend Adolf Hitler.

As Waititi wrote the script, he had no idea how it would be received. “It’s a very lonely business,” he said in our video interview, above. “I’ve written everything by myself…it’s usually me pacing up and down hallways, having a lot of dialogue with myself, with my characters, staring at the computer screen and going to sleep.”

He knew that shopping for backers for the film could be tricky. “The pitching of the film was always going to be awkward,” he said. “You can’t start with ‘it’s a lighthearted look at the atrocities of World War II.’ The script spoke for itself when it was shopped around town in Hollywood.” When Waititi sent the script to the talent agencies, while he didn’t score any financial backers, the script gained cred by landing on the 2012 Black List. “Most studios got it more when they read it.”

Then Waititi directed three movies that connected with audiences: “What We Do in the Shadows,” “Hunt for the Wilderpeople,” and Marvel sequel “Thor: Ragnarok.” That’s when Oscar perennial Fox Searchlight (“Birdman,” “The Shape of Water”) told him they wanted him to make his “weird World War II film,” he said. And suggested that he, not some marquee name, play Hitler. He assembled an eclectic cast including Oscar-winner Sam Rockwell (“Three Billboards Outside Ebbing, Missouri”) as a sympathetic Nazi officer, young Brit Roman Griffin Davis as Jojo, and Scarlett Johansson as his mother, who hides a young Jewish girl (Thomasin McKenzie) behind a wall in his house. She fights for dominance with Jojo’s imaginary friend. “I love this idea that it’s this weird love triangle where Hitler starts getting jealous: ‘oh you’re trying to get a new best friend,'” said Waititi.  “For me it’s a really simple way of showing the conflict in Jojo.”

The morning after “Jojo Rabbit” made its world premiere, Waititi was confused. His movie played through the roof with audiences who cheered the light-hearted but serious fable about a lonely boy and his imaginary Nazi friend. But the next day, the daring film was hovering in the 50s on Metacritic. That doesn’t always matter with Oscar voters (see blockbuster Queen biopic “Bohemian Rhapsody,” Metascore: 49). Searchlight introduced “Jojo Rabbit” at TIFF for a reason: they hoped it would score rapturous audience response and the coveted People’s Choice Award won by their eventual Oscar-winners “Slumdog Millionaire” and “12 Years a Slave.” And so “Jojo Rabbit” did, on its way to passing $20 million at the fall box office. To get to Best Picture, a movie has to grab attention, become a must-see hit, and play well for the Academy voters. “Jojo Rabbit” is well on its way.

This Article is related to: Film and tagged JoJo Rabbit, jojo-rabbit-ce, Taika Waititi