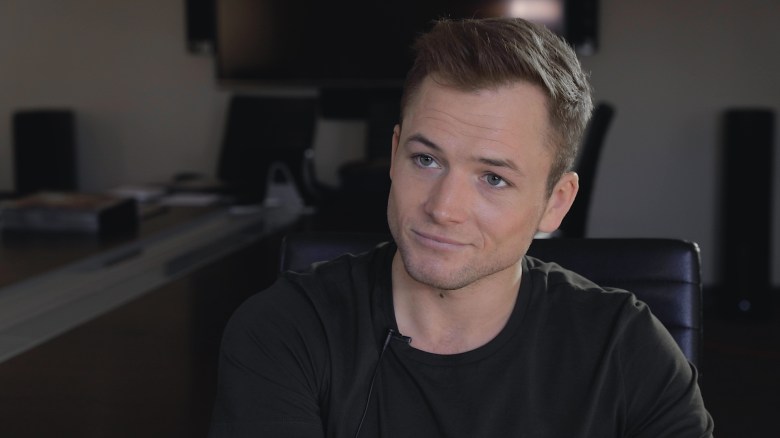 Dexter Fletcher’s R-rated film musical “Rocketman” stars Taron Egerton in a no-holds-barred performance as flamboyant pop star Elton John, from his straight-edge youth as a piano prodigy in Middlesex and his hedonistic rise to a music icon who could fill world stadiums to his stint in rehab to confront his past.

John encouraged and befriended Egerton, giving him the freedom to build a complex and nuanced character. The film is told from John’s point of view: He’s a survivor despite his success. “Look at Marilyn Monroe,” Fletcher told me after the film premiered at Cannes. “Many great artists know their personal lives are opposite to their outward reflection. I wanted to explore inside Elton, from his perspective. Elton is our storyteller. He goes to rehab. He’s someone combating their demons, who wants to get better, has a lot of issues to get to. We can all relate to it because it’s not a rockstar biopic, not a third-person account.”

Fletcher believed Egerton (best known to most audiences for “The Kingsman” series) was a skilled actor capable of more range and depth that “had not been tapped into,” he said. “It was a role Taron was born to play. He could play the incredible drive of Elton, be very focused and dedicated in his craft, and have innate vulnerability, and make him someone single-minded, but still appealing and real.”

The movie doesn’t shy away from John’s sexuality: John (Egerton) and his Svengali manager-lover (Richard Madden) have sexy chemistry. Egerton and Madden became close friends after the movie, he tells me in our video interview above. But the central relationship in the movie, Egerton said, is the platonic one between John and his screenwriting partner Bernie Taupin (Jamie Bell), revealed so movingly in “Your Song.” For John, Taupin was home.

It helped that Egerton was a gifted singer: he had to deliver 20 performances in a 60-day shoot. “He had this instrument in his voice that I wanted to explore and challenge,” said Fletcher.

On “Bohemian Rhapsody” (which Fletcher completed after Bryan Singer left the production), Oscar-winner Rami Malek lip-synced Mercury’s recordings, although they were remixed and made to sound live. By contrast, for “Rocketman,” some songs were pre-recorded so Egerton could sing along, while others were recorded live. “Taron created a musical role that he must sing,” said Fletcher. “So there’s live performances as Taron’s singing as we record on set.”

Fletcher staged all the songs in “Rocketman” as musical numbers. “It’s a performance used as a storytelling device,” he said. “I Want Love” is sung around a dining room table when John is 14 years old. The crucial musical sequence is “Rocket Man,” which combines Egerton’s performance at Dodger Stadium with a simultaneous bravura fantasy that includes balletical underwater elements. For “Saturday Night’s Alright,” Fletcher mounted an ambitious sequence around the teenage John coming into work, while “Crocodile Rock” brings John to an early performance at L.A.’s Troubadour Club.

Audiences and critics around the world have embraced this celebration of a music icon. In our video above, Egerton explains just how he transformed himself into Elton John.

This Article is related to: Film and tagged Direct, Oscars, Rocketman, Video