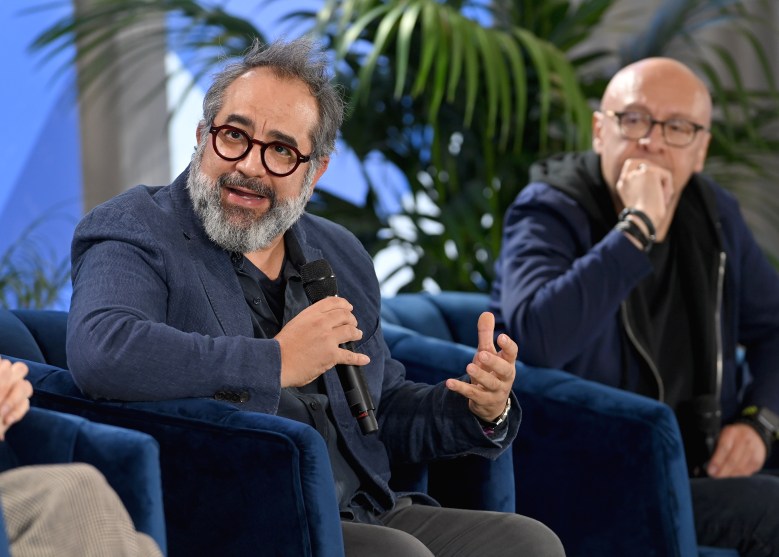 The term “bardo” comes from Buddhism and refers to the state of consciousness that exists between life and death — or between death and rebirth. It’s the perfect word for the title of Alejandro González Iñárritu’s new film, which exists in a slippery state itself — a mix of memory, reality, and fantasy about Silverio (Daniel Giménez Cacho), a journalist who’s already displaced because he’s an immigrant from Mexico to the U.S. who now returns to his home country. But is it really his “home” any longer?

Giménez Cacho was joined at the IndieWire Consider This FYCx Brunch in Hollywood on November 18 by fellow actor Ximena Lamadrid, production designer Eugenio Caballero, and supervising sound editor Martín Hernandez. They talked about the unique process of creating the film’s dreamlike reality.

The film is almost entirely subjective, from the consciousness of Silverio, so the environment of the film depicts changes with the rapidity of thought. How do build visually the internal state of a person’s mind?

“Alejandro always says this is a swim with a snorkel, in which you can see the depth and you can see the dark part as well but you’re always in the light,” Caballero said. “We’re seeing all of this through the eyes of Silverio. And then Silverio somehow is misplaced: He’s misplaced in Mexico, he doesn’t belong there. But he doesn’t belong here either, fully. That’s part of the process of immigration. But then that happens also with the sets themselves: You have water in a train, sand in an apartment, an apartment placed in the desert. All of these things were reflections of that sense [of displacement].”

Lamadrid could relate to that displacement, being Mexican but only having lived in Mexico during the production of the film after having grown up in Dubai. She’s now seen the film nine times and relates to it “culture-wise, immigration-wise, and Bardo-wise.”

But giving material dimension to these altered states required maximum creativity — and effort.

“The sets had to have the complexity of Silverio,” Caballero said. “There are contradictions — and sophistication as well, in the tone of the sets. We play with colors, a lot of saturated colors that create a different way of seeing Mexico City. And for that, we needed a lot of precision, because like what Daniel was saying, he was letting himself go every morning, but in order to create that we needed to have a very precise sense of choreography in the sets. In order for them to let loose everything on our sets needed to be rehearsed.”

Hernandez felt that, for Iñárritu, sound was just as important as image — how else could you experience someone else’s mental state without a complete sensual immersion, including sound?

“It’s not a movie to translate or to try to understand as a regular film,” Hernandez said. “You see it and you try to understand what the characters are saying… But this specific film, to me, ‘Bardo’ is more an album of sound. An album that you can hear and you can feel. It’s not really crucial to fully understand the lines. It’s very emotional.”

Watch the full “Bardo” panel from the IndieWire Consider This FYC Brunch above.