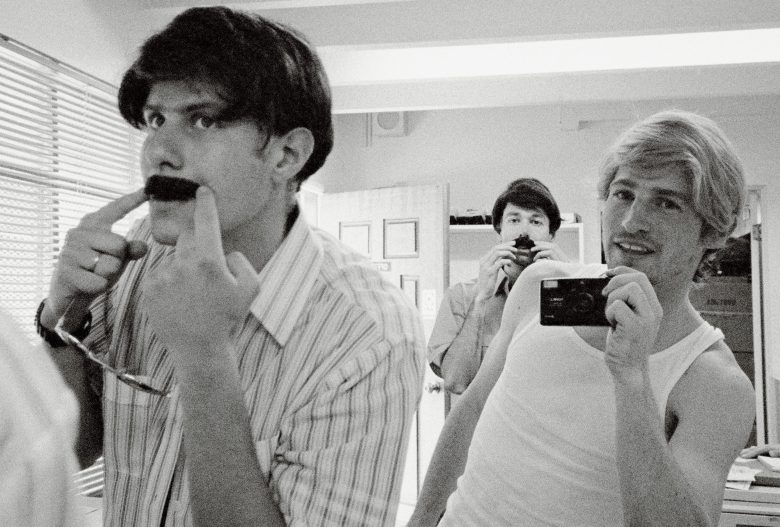 Director Spike Jonze first met the Beastie Boys soon after they put out their second album “Paul’s Boutique,” and Jonze’s fledgling magazine Dirt put the band on its first ever cover. “They were notoriously – I wouldn’t say a difficult interview, but difficult to get a straight answer out of,” said Jonze, when he was a guest on the Filmmaker Toolkit Podcast with his editor Jeff Buchanan. “But a hilarious interview, a stew of inside jokes and absurdity.”

Around the time of the Beastie Boys’ next album, “Check Your Head,” Jonze became a regular at their Atwater Village recording studio. “They didn’t look at me, like ‘We’re some rock stars and you’re some kid,'” said Jonze. “They were like, ‘We’re all just kids making shit.'”

Jonze helped the Beastie Boys put out their own magazine, Grand Royale, and soon became their music video director, and a decades-long friendship blossomed around just “making cool shit” together. When the two surviving members, Adam Horovitz (Ad-Rock) and Michael Louis Diamond (Mike D), created a stage show in support of their book about the history of the band, Jonze started to see the potential for a documentary.

“We’d never done this before and we’re all idiots and thought we could do the whole thing in two months, from page one to the final show,” said Jonze. “By the time it was six weeks in and we still hadn’t finished the script and we were on stage in LA, and supposed to have been rehearsing and tech’ing it, and all this stuff you do in theater, we were still in the dressing room writing it.”

Buchanan, who was already assembling the video used as part of the stage show before the idea of what would become “Beastie Boys Story” had even been broached, was alongside Jonze throughout the undefined creative endeavor. “Spike it making it seem like it was a lot of fun, but it was terrifying,” said Buchanan. “Some days it felt like it was Fyre Fest. It was like, ‘How is this going to work?’ We just had so many ideas, and we wanted to do so much, and we did all of it, it was amazing, but it was scary.”

Jonze admits Buchanan is correct in his description, but for Jonze the experience was emotional. “It was personal to make this thing about these three people that I love,” he said. “Not only that I love their music, but I love them.” Part of what made it emotional was that the third member of the band, Adam Yauch (MCA), who died of cancer in 2012, was not there to tell the story of the band.

“One of the things that was so special to me, and I know to Mike and Adam, was getting to hang out with Yauch for that period of time that we made it,” said Jonze. “And to think about him, and talk about him, and we just always wanted him with us.”

To watch Jonze and Buchanan talk about how the spirit of Yauch was kept part of the film through the use the song “I Don’t Know,” watch the video above. To hear the full conversation, subscribe to the podcast.