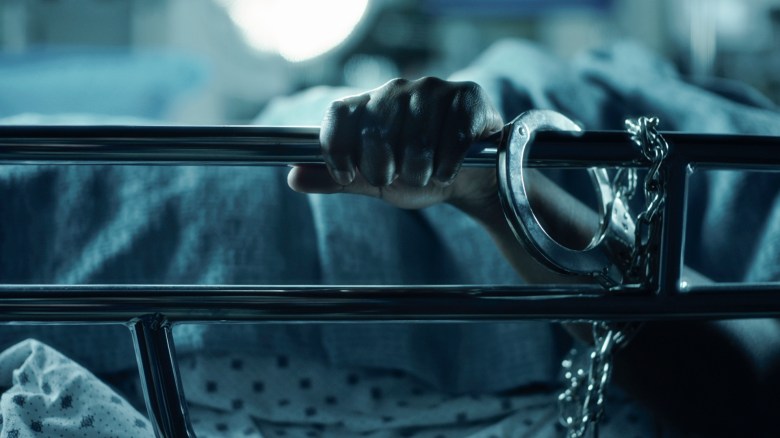 Ten years ago, director Erika Cohn met Cynthia Chandler, the co-founder and executive director of Justice Now, an organization pushing for prison abolition focused on incarcerated women. Cohn was specifically inspired by their campaign called “Let Our Families Have a Future,” which exposed the multiple ways in which prisons destroy the basic human right to a family — a problem manifested in its most atrocious form in the forced sterilizations committed against women of color.

At first, Cohn served as a volunteer legal advocate supporting over 150 people inside California’s women’s prisons. The project that would ultimately become her feature documentary “Belly of the Beast” began as a way of documenting the injustices that were happening inside the state’s correctional institutions.

But that changed when she met Kelli Dillon, an advocate for violence prevention and a victim of illegal hysterectomy herself. Not ready to share her story on-camera, Dillon first joined as an advisor behind the scenes. But in 2013, when a report by the Center for Investigative Reporting brought the issue back in the national zeitgeist and lead to a series of hearings, Dillon was called to testify on her behalf and that of many other women who underwent the same unspeakable ordeal but didn’t have a platform.

“That was also the moment that Kelli and I decided that we would start filming, and from there it became very clear that the film really needed to center around her story and her relationship with Cynthia…if it wasn’t [sic] for Kelli, none of this would have happened to begin with. If it wasn’t for Kelli’s initial discovery and also advocating for others, there wouldn’t be a film. There wouldn’t be the investigation that Justice Now did the series of reporting. I mean, there wouldn’t be a bill, none of this would have happened,” said Cohn during a Q&A as part of the International Documentary Association’s annual screening series.

Both Chandler and Dillon have been fighting for over 20 years against a system that engages in practices that can only be described as eugenics. Given the current conversations around racial justice and reproductive rights, and how the COVID-19 pandemic has further exhibited the way race and class affect access to healthcare in this country, they believe there couldn’t be a more imperative moment to educate and confront such heinous crimes through the film.

“White supremacy, ableism, misogyny are at the root of our culture in our society. They were omnipresent to the founding of this country and they haven’t gone away and they affect all of our institutions, including our family structures and who has the right to have, or not have children,” stated Chandler assertively. Watch the video of the “Belly of the Beast” team’s interview with IndieWire TV Editor Kristen Lopez above.

The documentary’s opening sequence shows Dillon being interrogated about what was done to her not as the victim of a crime but as if she were a suspect on trial. For her, that segment exemplifies what’s a reality for women of color everywhere. “Most women of color are not seen as victims, period. We’re not given the same compassion, whether it’s sexual assault, domestic violence, police brutality, death…most women of color are villainized in some way, discredited in some way to not make what happened to them as impactful as it really is. And that’s what you were seeing in that moment,” noted Dillon.

According to producer Angela Tucker, “Belly of the Beast” was a mission-driven project for everyone involved from the onset, and that mindset guided the choices the team made in regards to the release. The film was self-distributed via virtual cinemas earlier this year, and premiered on PBS on November 23.

“[We were] focused on who is the audience for this film, what did we make this film for? And I think people can get really mired in festivals and things…That might be why you made the film, but for us, we knew that we really wanted this film to be available to communities, to people who need to see it and to organizations who can utilize it,” explained Tucker. “That actually made the decision-making process pretty clear, because if that’s what you say this is all about, you then can’t hold it back for arbitrary status reasons. So you have to really put your film on the path that it needs to be on. And that’s a hard decision for some people to make, but it’s an important decision.”

“Belly of the Beast” is available here.