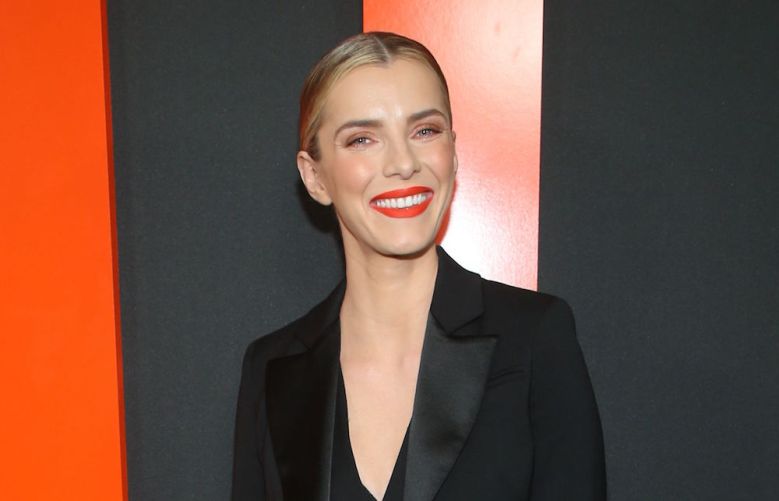 At the start of “GLOW’s” story, Debbie Eagan appeared to be anything but weird. A prototypical stay-at-home mom living in the suburbs of 1980s Los Angeles, Betty Gilpin’s role was one all-too-familiar to TV: a housewife. She took care of the newborn baby, went to jazzercise classes with her friend Ruth (Alison Brie) each day, and made the evening dinner for her hubby, Mark (Rich Sommer) each night.

“[Debbie] is kind of like, “OK, my job in life is to be the Barbie version of me, so I have to push down all the dark, weird stuff that I feel churning in me all the time because that’s not useful,'” Gilpin said of Debbie’s initial headspace.

But “GLOW” — and Gilpin — quickly bring that stuff back up, shattering conventional expectations and turning Debbie into not just Liberty Belle, the fan-favorite “face” in a televised women’s wrestling league, but revealing long-dormant attributes outside the ring. By Season 3, she’s reversed parenting positions, leaving her ex-husband at home to take care of the baby while she travels to Las Vegas for the bright lights and big opportunities. Heading into “GLOW” Season 4, she’s cutting deals to save her show and taking on more responsibility than she ever imagined.

She’s also a weirdo — a commanding, surprising, and wonderful weirdo whose endearing eccentricities emerge in moments as small as a near-silent phone call and as large as centerstage of the wrestling ring. Like all great actors aim to do and few can consistently achieve, Gilpin turns every scene, line, and gesture into a defining moment, helping outline Debbie’s growth with singular instants that stand out as they draw you in.

“Sometimes being alive and being a woman feels like your brain is a room full of women who take turns at the wheel, and I try to think of that with every character I play,” Gilpin said. “What brain woman in this character’s brain has the wheel in this sentence or in this take?”

Given Gilpin’s onscreen inventiveness, it should come as no surprise that sometimes those brain women turn into brain creatures, and on the set of “The Hunt,” this year’s Universal Pictures’ action-thriller, out came “the baby dinosaur.”

“For Crystal in ‘The Hunt,’ I think some of her brain women are Linda Hamilton from ‘The Terminator,’ Scout Finch from ‘To Kill a Mockingbird,’ and then a baby dinosaur that’s just kind of like [Gilpin makes a low-pitch dinosaur noise],” Gilpin said. “Debbie’s baby dinosaur equivalent is a blood-in-its-teeth, kind of dark, Greek monster in her that she’s really pushed down to become that ‘80s housewife. […] Strangely, the combination of motherhood, her friend’s betrayal, and finding wrestling were kind of the perfect storm to unleash the inner Kraken.”

“I think it’s sort of easy to believe the world, and Twitter, and society — back when there was a society — when it tells you the things that are valuable about you are the Barbie things, and to push down all the weird, uglier things,” Gilpin said. “The weird thing is it’s the Gremlin-y, baby dinosaur stuff that makes the best work.”

Feeding that baby dinosaur by reading, working, and  as often as she can, however she can, helps her even when she doesn’t have time for a baby dinosaur take. For instance, in the second episode of Season 3, when Debbie gets a call from her ex telling her that she missed her son’s first steps, Gilpin’s face reflects a kaleidoscope of emotions — each sentence she can barely bring herself to speak carries its own specific motivation, be it pain, anger, jealousy, or jubilation, but all those feelings bleed over each other, too. Her performance has to hit about seven different beats, while the phone call has to feel like it came out of nowhere. Lucky or not for Gilpin, she didn’t have much time to prepare.

“That scene was at like midnight and we had, like, two takes because we had to get out and start the next day,” Gilpin said. “I try not to think too specifically about what I’m going to do in the scene — then a scene just becomes these sets of hoops I’m going to jump through, and it feels too planned. But if we’re talking about brain women, Debbie’s brain women get to be a little bit externalized — one is so excited, and one is still in love with Mark, and one hates Mark, and one never wanted to be a mom, and one wants more than anything to quit everything and just be with Randy. I think there’s room in there for all of them to kind of jump out of her mouth for a second and then come back in.”

Her experience (and excellence) on “GLOW” has helped her tackle a variety of other roles, including three major films this year. Starting with the horror reboot “The Grudge,” Gilpin also played an utterly wackadoo police detective in Netflix’s comedy “Coffee & Kareem,” as well as a survivalist dropped into extreme circumstances in “The Hunt.” Each performance is impressively distinct — even considering the disparate genres at play (and how they’re all very different from “GLOW”), it’s easy to imagine all of Gilpin’s characters together in one room without ever asking, “Wait, which one is which?”

Now, Gilpin is waiting for production to resume on the fourth and final season of “GLOW,” while using the downtime to recharge. Going from project to project and working heavy hours on each requires a lot of what Gilpin calls “alpha energy” — drawing from all her hard work, all her brain women, when the lights are on and the cameras are rolling. So during this unanticipated downtime, she’s focusing on refilling her “beta well.”

“I just feel like there’s this hamster-wheel energy that happens that’s so poisonous to interesting creative work,” Gilpin said. “So I’ve been trying to write for the sake of writing and read for the sake of reading — not because someone is developing it into a TV show. […] I’m just trying to feed the baby dinosaur during quarantine.”