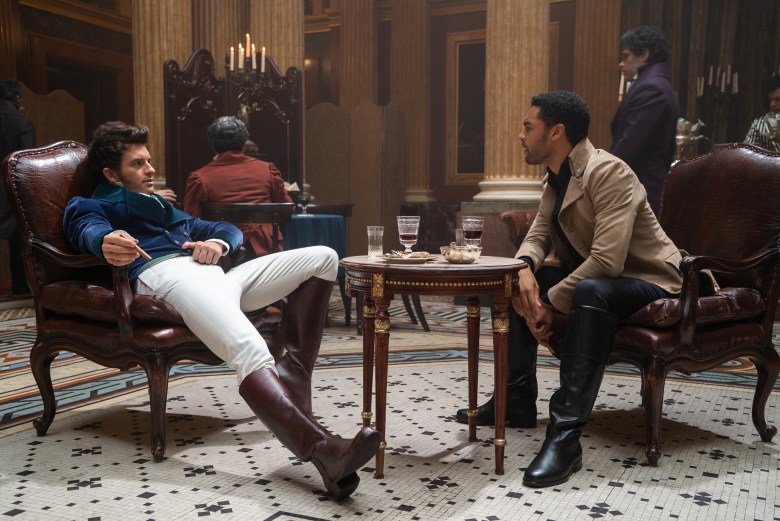 Subverting expectations takes plenty of planning. For the Netflix series “Bridgerton,” the idea of offering a different kind of lavish drama, dripping with the intrigue of centuries past, began far before the cameras rolled.

In particular, the sound of this distinct world was going to draw on a few unlikely sources.

“That’s a conversation that I had soon after I got to read the first script,” series music supervisor Alexandra Patsavas said. “I sat in an actual room with Shonda [Rhimes] and Chris Van Dusen and Betsy Beers, and we really talked about how important an instrumental could be. What would make sense for ‘Bridgerton’ that would not only honor the Regency period but really embrace a modern aesthetic, too. We talked about the idea of pop covers far in advance of anything actually being cut into picture. I spent some time sending down instrumentals of all shapes and sizes, which included those covers, Regency and classical era-appropriate pieces, as well as some other modern instrumentals.”

In some ways, those markers became more important than ever throughout 2020 as the team behind the Netflix series worked to finish all eight episodes of the opening season. Faced with a challenging post-production process, with craftspeople spread across a number of different locations, finalizing the music for the show proved to be a demanding element.

Fortunately, early on in the process, one idea helped bridge the gap between the time period in which the show is set and the one in which it’s told. Along with the ascendant members of the show’s cast, some of the other “Bridgerton” breakouts have been those various string-quartet covers of pop songs, played during some of the series’ key social events.

“Those covers that Alex had pulled were a big lightbulb moment for me because it felt like, ‘Oh, wow, I immediately feel like I can empathize with these characters in a different way because I relate to how this song feels to me. Now I can put myself in this space a little bit easier,'” Bowers said. “I feel like because of that, sometimes I would listen more to a pop piece of music to look at what I wanted to do. Even tempo-wise, I really feel like tempo or rhythm is a big thing as far as what makes people want to move.”

With that extra help, Bowers saw his first big challenge as the culminating moment of Episode 1. To have the full, rich sound to signal the beginning of a strategic (and possibly romantic) alliance was a key test for whether an ensemble recorded in various locations could work for “Bridgerton.”

“I remember getting the first couple of mixes back. It was a huge sigh of relief that it sounded the way that it did and also that people are still putting that amount of love into the music,” Bowers said. “It’s easy to do that when you’re in a room full of people. If you’re having an off day and you get into a room and everybody’s playing this music and you’re feeling it live, it’s easy to be pulled by that, to play it in a certain way. But everybody doing this at home by themselves, with whatever is happening in their own lives and still bringing that level of musicality to it and emotion to it, just felt really amazing.”

Amidst the uncertainties of many people involved being siloed in different locations, the “Bridgerton” team took on the bulk of the series’ musical work in spring of 2020. The further the highly virtual process went on, Patsavas began to see it less as an impediment to an old way of doing things and more of a signal of how future productions could take some of these musical ideas and techniques.

“It was great to have those spotting sessions. We had the same roomful of people that we would have had in person: producers, editors, assistant editors, post. We were able to have these very creative conversations, but also very technical conversations. In this way, I think we will be taking a lot of that with us,” Patsavas said. “I was thinking, Kris, gosh, if you wanted a special cellist, or the most amazing saxophone player on earth, you might be open to hiring that person anywhere in the world now. Would we have thought of that just a year-and-a-half ago? There’s many things that I know I miss about the way we used to do things, but I do think there are amazing changes that we’ll take with us.”

It’s an overall blending of professional expertise and a willingness to adapt to unfamiliar circumstances that marked a few other elements of “Bridgerton.” In composing a theme for Lady Whistledown, the series’ enigmatic gossip royalty, Bowers wasn’t privy to the information that the audience gets in the season’s waning moments. Season 2 of “Bridgerton” is still in its relative infancy, but Bowers said, aside from reexamining that particular person’s identity, there are plenty of story aspects he’s looking forward to digging into once those episodes start to move past the writing stage.

“We now know who Lady Whistledown is and how that theme is going to play with that character’s theme, being able to build on that a little bit more. I also just think that a lot of the moments that feel really modern in the score, they were really fun and I think turned out really well. So I’m excited to dive a bit deeper into that as well,” Bowers said. “I’m just excited to explore more themes and be specific to the characters that we’re going to be diving a bit deeper into this season. I don’t really know anything that’s happening in the season yet, so I couldn’t even spoil it if I wanted to, thankfully. But we all know that it’s gonna be a little bit different of a story, and so I feel like that’s gonna be really exciting.”

This Article is related to: Awards and tagged Bridgerton, Consider This Panels, Netflix