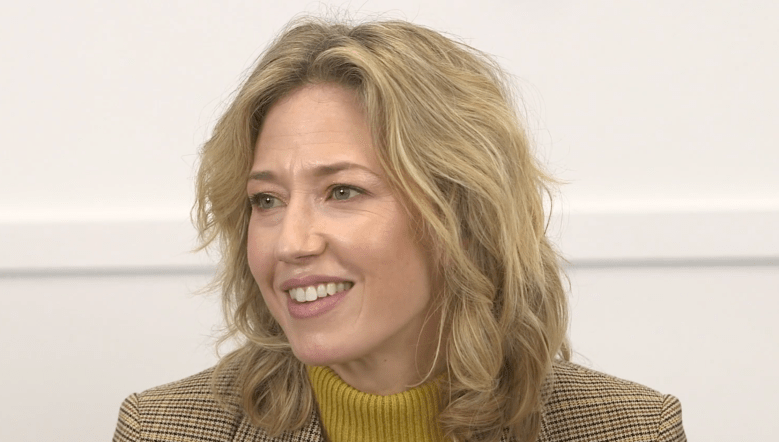 “Ghostbusters” will soon be back in theaters, with the latest installment of the franchise coming in the form of a summer tentpole on July 10. Unlike Paul Feig’s 2016 female-led reboot, “Ghostbusters: Afterlife” is a direct sequel to the 1984 original and 1989 followup film, complete with Bill Murray, Dan Aykroyd, Ernie Hudson, Sigourney Weaver, and Annie Potts reprising their roles. But among those new to the incoming cast is “The Leftovers” and “Fargo” favorite Carrie Coon, who this January stopped by the IndieWire Studio, presented by Dropbox, at Sundance to promote her festival entry “The Nest.” During the interview, Coon offered “Ghostbusters” fans a taste of what’s to come in the new sequel.

“It’s really a family story. It’s still very funny and I just feel like it’s very warm in a way that we, perhaps, need right now,” Coon said. “It’s a real balm for the soul. I think that will actually surprise people. I think it’s for everyone. People will be grateful for the escape that it’s going to offer from the world.”

The movie itself is a family affair: “Afterlife” is directed by “Juno” helmer Jason Reitman, son of Ivan Reitman, who directed the first two movies in the franchise. The elder Reitman produced the new movie, which was co-written by his son and Gil Kenan, who directed the 2015 version of “Poltergeist.”

The original film, which earned a spot on the National Film Registry in 2015, is known for its genre-bending, endlessly quotable script, penned by Aykroyd and “Groundhog Day” director Harold Ramis. And, of course, there’s that chart-topping theme song, which was nominated for an Oscar.

“I think the original script was really innovative,” Coon told IndieWire. “I don’t think anybody had seen anything quite like it before. It sort of launched a genre; there’s this comic sci-fi genre. Really, it was one of the first of its kind. Now we’ve had so many of those films.” Coon continued: “I think what’s remarkable that Jason has done is… a real love letter to the franchise.”

The “Afterlife” ensemble is rounded out by Mckenna Grace, Finn Wolfhard, Paul Rudd, Celeste O’Connor, Logan Kim, Bokeem Woodbine, and Oliver Cooper. Many of the film’s new cast of characters comprise a family who move back to a small town, where they learn haunting secrets about their past and the town they’re living in.

This Article is related to: Film and tagged Carrie Coon, Ghostbusters, Sundance