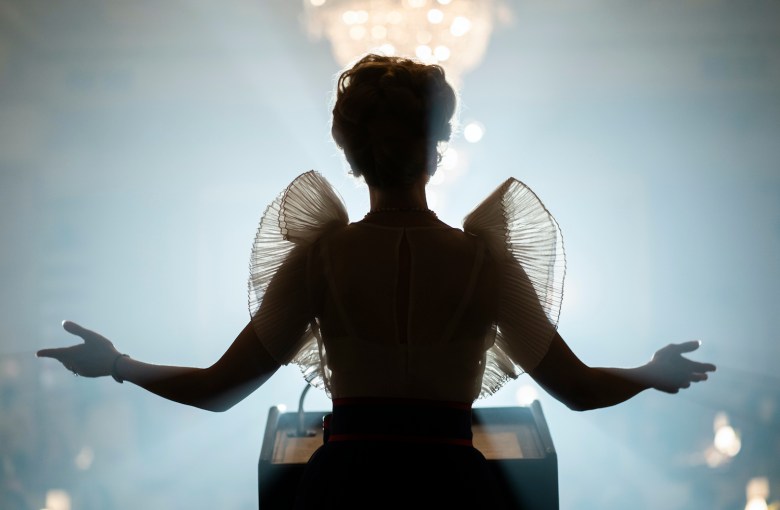 It seems only appropriate, in the same week in which Senator Kamala Harris became the first Black woman ever on a major party presidential ticket, to revisit the 2020 limited series that focused wholly on America’s women’s rights movement — specifically the rocky road traveled by the women attempting to pass the Equal Rights Amendment throughout the 1970s, as well as those working to stop it.

FX on Hulu’s “Mrs. America” used controversial conservative activist Phyllis Schlafly (a menacingly luminous and Emmy-nominated Cate Blanchett) as a pivot point for the show’s narrative, while building out a dynamite cast of players (including Emmy nominees Uzo Aduba, Margo Martindale, and Tracey Ullman) each of whom have their own respective episode to shine.

But few shine as brightly as Aduba, whose portrayal of Shirley Chisholm (the first Black woman elected to the United States Congress) is electric, particularly in her standalone episode, “Shirley,” written by Tanya Barfield. In it, Chisholm is committed to her presidential candidacy and disheartened by a feminist movement that cannot comprehend the importance of intersectionality.

“It was at points terrifying but also really wonderful,” Aduba said during a “Mrs. America” group interview with IndieWire (video available above) of stepping into Chisholm’s shoes. “After reading that script by Tanya and to know that we were telling more of her story than just the woman we would see on the stage, at the pulpit, on our televisions, even. We were looking to capture a lot of the innards of who she was and what it meant really to be the only.”

And while Chisholm makes sense for her inclusion in a narrative about women’s rights, why center a series around an active opponent to equality, such as we find in Schlafly?

For executive producer Stacey Sher, it was Schlafly’s contradictions that made her such an appealing subject to explore.

“She clearly lived her life with feminist values and with her own agency, but she was fighting against her own best interest,” Sher said. “I think it’s what makes the show so incredibly modern today because she was very divisive. People dismissed her and she still pulled off this sort of revolution of the religious right.”

No matter your feelings about Schlafly or her politics, her journey is nothing if not interesting. But the real appeal to a story about the ERA is that it was an opportunity for creator Dahvi Waller to craft a political drama series focused on and populated by women.

“Usually political dramas are centered on men, and they’re written and directed by men,” Waller said. “So it was very exciting to me to write about women not as mothers or daughters or sisters, but as ambitious women who are unapologetic and who are seeking agency and advancement of other women. And also the women who are seeking to keep change from happening and keep things the status quo. All those multifaceted ways of being a woman really intrigued me.”

Of course, timing also served as a heavy dose of inspiration, as Waller had originally been writing the pilot during the 2016 election, after which she re-conceived the series, stepping back from the story of the women’s movement and its backlash.

“There was a larger story that I wanted to tell, which is about the rise of the religious right and how the far right got into power,” Waller said. “Phyllis is so central to that story, which really explains how we got to where we are today, where something as basic as equality is so polarizing.”

Reviled by the left and revered by the right, Schlafly played a huge part behind the scenes in the rise of the Religious Right and actively worked to limit the quest for equal rights in America. Knowing her history set quite a challenge for the now Emmy-nominated Blanchett, but those divergent aspects of Schlafly’s character appealed to the actress.

“I’m not interested in presenting my own political beliefs or making work in my own image, Blanchett, who also served as an executive producer on the series, said. “It’s far more fascinating to inhabit people who think nothing like you, whose frames of reference are nothing like your own. You build a bridge of empathy, in a way, to to their experience.”

“What was revealed in the wake of the 2016 election was just how divided the country was,” she said. “You would speak to people in certain states, from certain socio-economic standing, certain sub-cultural groups, certain genders, and they would feel that the Obama administration had left them behind, had ignored them, that they felt outside of America and that their interests were not being represented. And I thought, ‘Well, how can you possibly say that when you’ve really been in power for several hundred years?’

Blanchett continued, speaking about the real and devastating schism happening in the country, and observing that Schlafly, too, was a grassroots outsider; so much so that it probably cost her the position in President Reagan’s cabinet she so longed for.

“I was interested in trying to find a way to be part of a conversation that built a bridge between what seemed to be polar opposites, whether they were polar opposites from a gender perspective or political perspective,” Blanchett said. “I think drama has the ability to do that. And I think our political discourse, not just in America, but globally, has become so divided that we can’t have nuanced conversations about things as important and as political as equality.”

To see more of IndieWire’s conversation with the women of “Mrs. America,” check out the video above.

“Mrs. America” is available to stream via FX on Hulu.