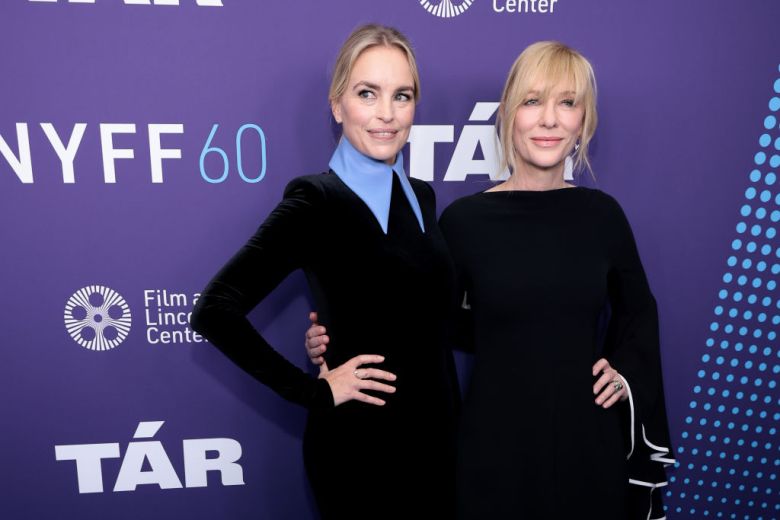 Lydia Tár contains multitudes: She’s a world-class composer, a manipulative powermonger, and a serial liar. However, Todd Field’s “TÁR” makes it clear that the contradictory figure embodied by Cate Blanchett in the filmmaker’s riveting psychodrama contends with a lot of her problems because she’s also a married woman. As Sharon, the Berlin Philharmonic’s first violinist and Lydia’s wife, Nina Hoss provides the nurturing role that holds Blanchett’s towering performance in place.

“It’s a very deep relationship,” Blanchett said, discussing her dynamic with Hoss for IndieWire’s Awards Spotlight series. “We spend a lot of time in orbit of one another.”

Some of the complexities of that relationship take place offscreen, long before the movie begins. “We shot more scenes that you can find in the film because they don’t belong there,” Hoss said. “But we have them. We experienced certain family scenes. There was another big chunk of the story that didn’t make it into the film which was very informative for Cate and myself about where these two are.” Blanchett agreed. “It was really great for us to know the backstory,” she said.

Blanchett added that Field included several key details about Lydia’s history that didn’t make into the final cut, including a scene with her deaf mother. “You realize she had grown up in an incredibly silent household,” Blanchett said. “Todd decided in the end that that was a texture he didn’t want to give people that much access to — but I knew that.” He also included the revelation that the character suffers from misofonia — a sensitivity to common sounds — but removed any explicit references to it. “So I’m reacting to almost like an internal pressure,” Blanchett said. “But I knew what her condition was.”

Knowing the range of psychological issues afflicting Lydia enabled Hoss to envision the way that Sharon offered her support for her partner. “Sharon can organize the orchestra for Lydia so that Lydia doesn’t have to do that part of the job,” Hoss said. “She tries to create the carpet so that Lydia can put her genius stroke on the pieces that they’re working on.”

That dynamic reaches a breaking point once Sharon realizes that Lydia has been lying to her after she faces media backlash for workplace malfeasance. “Sharon is not taken aback so much by what people have accused Lydia of,” Hoss said. “Her problem is that she wasn’t trustworthy, that she could help Lydia or that she could be there and face anything that comes up. That is the moment where Sharon has to protect her family — but also her career.”

The role required Hoss to deliver a series complex reactions to Lydia as her world crumbles around her. “Sharon observes a lot,” Hoss said. “She feels something is going on with Lydia and needs to observe every nuance.”

Hoss had admired Blanchett from afar for years, going back to her breakout role in “Elizabeth” nearly 25 years ago. “I was like, ‘Whoa, who is this woman?,'” Hoss said. “Since then, I am glued to her work.”

They bonded in Budapest last year when they were both staying in the same hotel working on separate projects and adhering to strict COVID quarantine protocols. “Obviously I knew Nina’s work onscreen and onstage,” Blanchett said. “How had we not met and work together before?”

As they discussed their upcoming dynamic, they realized that it came to a contrast between Lydia the outsider and Sharon the local. Sharon is a Berlin native while Lydia is an American expatriate reliant on her partner to stabilize her as she leads the orchestra under uneasy circumstances. “Sharon grew up with this very patriarchal system that the classical music still has, particularly in Germany,” Hoss said. “It’s very hard to break through those kind of still fairly rigid walls.”

Given that Sharon helps Lydia navigate these challenges, the scene in which they realize their relationship is steeped in dishonesty cuts especially deep. They completed the exchange in one shot. “It becomes this tunnel of tension,” Hoss said.

By the end of the movie, the future of both characters is ambiguous — though Hoss said she felt like Sharon would be willing to give them a second chance together. “She knows why she fell in love with this person,” Hoss said. “From Sharon’s point of view, there is a possibility — but where we leave Lydia, I don’t know.”

Watch the full discussion above.

“TÁR” is now available in theaters and various digital platforms from Focus Features.