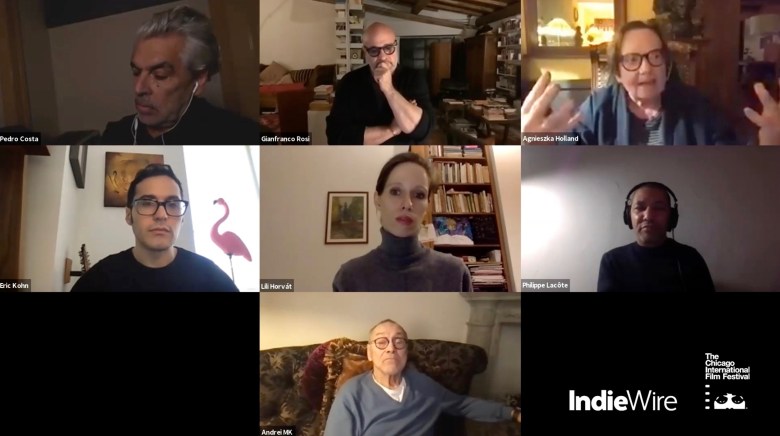 The Chicago International Film Festival and IndieWire partnered on a panel discussion with six filmmakers whose films have been selected as their countries’ Oscar entries: Andrei Konchalovsky, “Dear Comrades!”; Pedro Costa, “Vitalina Varela” (Portugal); Agnieszka Holland, “Charlatan” (Poland); Lili Horvát, “Preparations to Be Together for an Unknown Period of Time” (Hungary); Philippe Lacôte, “Night of the Kings” (Ivory Coast); and Gianfranco Rosi, “Notturno” (Italy). The nearly 90-minute discussion was wide-ranging and included discussions of each filmmaker’s film, as well as ones that involved the directors reflecting on their careers.

A few of the filmmakers who spoke to IndieWire Executive Editor and Chief Critic Eric Kohn, as part of the panel, have been making films for decades. Others, like Horvát, are much younger and less further along in their careers. Watch the full video of the Chicago International Film Festival discussion above.

Konchalovsky is one of the elder statesmen: His latest film, Soviet historical drama “Dear Comrades!,” has been selected as the Russian entry for Best International Feature at this year’s Oscars. Reflecting on his over five decades as a filmmaker, Konchalovsky says his mindset has drastically shifted from his 1965 thesis film, “The First Teacher”: he now knows filmmaking is about the mysterious nature of trying to capture the truth.

Though romantic drama “Preparations” only marks Horvát’s second feature, she said the impulse to tell stories has been with her for much of her life.

“I wrote a novel in third grade. This part of my life, it was a secret part of my life when I was a child and it became visible when I became a film student,” she said. “One thing you can see as a change in this film, you can feel the grown-up experience, personal experience behind it. I got closest to what or how I really want to tell a story with this film.”

Holland, whose debut feature “Provincial Actors” was released in 1979, said as much as has changed in filmmaking, many things remain the same.

“It’s the same kind of energy and need and urge,” she said. “The difference, when I did my first feature film ‘Provincial Actors,’ we didn’t have a lot of film in communist Poland, we had a lot of time. It meant we had to shoot and edit the film before, in our heads. It was a very good school. It taught me that every position of the camera is somehow a moral choice, it has to be necessary. I can’t do anything that’s just random.”

In her subsequent works, including biographical drama “Charlatan,” Holland had the luxury of being able to shoot more, but that same attention to detail has remained, she said.

This Article is related to: Film and tagged Charlatan, Chicago International Film Festival, night of the kings, Notturno, preparations to be together for an unknown period of time