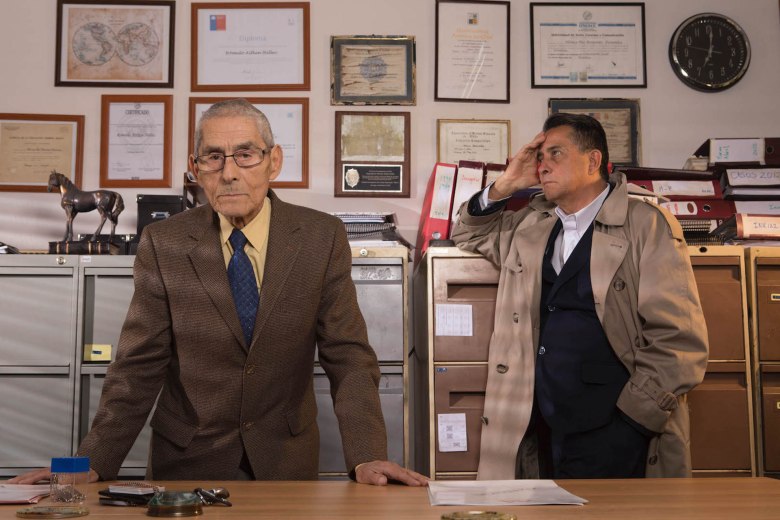 Documentarian Maite Alberdi has made several features focused on the joys and perils of old age, so when the pieces fell into place for her latest work, “The Mole Agent,” which premiered at Sundance 2020 and is currently Chile’s Oscar entry for Best International Feature Film, it was a natural fit. Originally, her intention was to make a noir film about a private detective. She researched countless agencies in her native Chile and eventually came across Rómulo Aitke, the private detective that appears in the film.

“He was the only one that allowed me to research inside his company. I worked with him as his assistant for a couple of months, and I saw different cases of moles. At the beginning, I thought of making a TV series of different mole cases, but that was super difficult for us to plan how to shoot it without being discovered and without interfering in Romulo’s work. We saw different cases and the one in the retirement home was the one we really loved because it was connected to our previous films,” said Alberdi during a Q&A as part of the International Documentary Association’s annual screening series.

In need of a replacement for the agent that was supposed to take on the retirement home case, Romulo placed a newspaper ad. Charming 83-year-old Sergio Chamy was one of the people who answered the ad. Chamy’s larger-than-life personality and interest in the mission made him the perfect choice. He had just lost his wife and was in need of a purpose.

“We saw him and we were completely in love with him. We knew that probably he wasn’t going to be the best spy in the world as the previous one that worked with [Romulo]. We had to beg Romulo to hire Sergio. He was the one that turned the film in another [direction], because he was not committed with the job at the beginning, but he was committed to the character and to the reality of that place,” added the director. Watch the video of Alberdi and her team’s interview with Executive Editor & Chief Critic Eric Kohn above.

One of the most challenging aspects of the production was to shoot a spy’s activities without being discovered. To address that, the team arrived at the retirement home before Sergio entered the picture. Since Alberdi had a track record creating projects centered on the elderly, the staff and owners were very receptive to their requests. She admits that they lied to those in charge of the facilities to protect both the intentions of the investigation: checking on one of the women there; and in turn the film’s real angle: following Chamy’s daily tasks to obtain that information for Romulo’s client.

“We told them that we wanted to make a film about old age and about that specific place, and that if anybody new came, we would like to put special focus on any new arrival to the retirement home. So what happened is that we started shooting like two weeks before Sergio actually arrived. People got used to the cameras and then while we were already shooting, Sergio arrived to the retirement home and that was how, smoothly, he became the protagonist without nobody ever suspecting it,” explained producer Marcela Santibáñez.

However, things didn’t go as smoothly with Chamy. Alberdi recalled that on the third day of shooting he wanted to quit because the retirement home’s owner told him he would quickly adapt like the others. Chamy was afraid of becoming part of the group. He didn’t see himself as someone who would ever need to stay there. Since he had originally signed on for the job and not to be part of a film, it was difficult for the production to convince him to stay.

Ultimately he decided against leaving, but in order not to confuse him, Alberdi had to communicate with Chamy through Romulo. They were concerned that if he knew his mission was the focus of the movie, the staff would accidentally discover him. They were, of course, unaware that his investigative assignment put into question the care they provide.

Alberti believes that people’s prejudices against retirement homes as places that exist solely to house people before death or to remove the elderly from society is a major problem. As she worked on the film, it was difficult for her to accept that her own preconceived notions regarding these places were wrong. In the aftermath of this filmmaking adventure, the director realized there’s a need to create a bridge between the elderly and the rest of society, and more importantly, that every person deals in a different way with the inevitably of growing old.

“What I think is universal is that you don’t see one way of being an old person. You have a woman that falls in love with Romulo, one that has Alzheimer’s, and another one that’s missing her family. There are different types of old people, so you cannot make one speech about the elderly in that place,” said Alberdi.