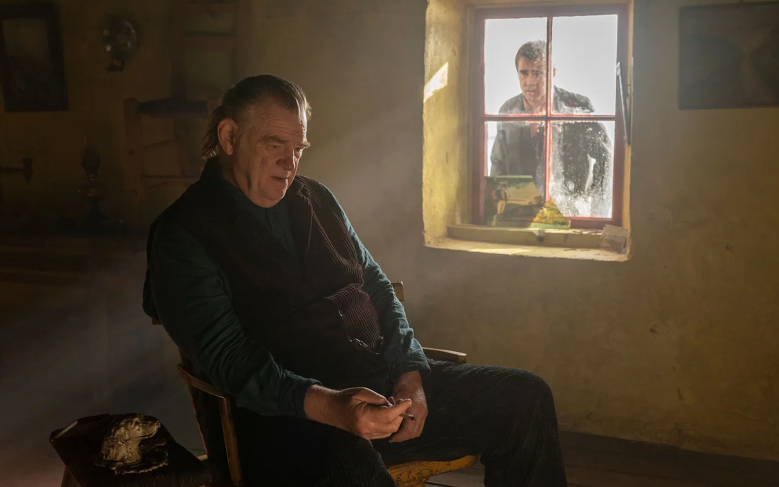 Colin Farrell and Brendan Gleeson have a unique on-screen chemistry, but only recently confronted their shared roots. “Talk about degrees of Irishness,” Farrell said, in conversation over Zoom with Gleeson to discuss “The Banshees of Inisherin,” their new tragicomedy. “It’s painful material.”

Farrell and Gleeson first collaborated as the hitmen co-stars of playwright-turned-filmmaker Martin McDonagh’s feature debut “In Bruges,” and picked it up 14 years later with McDonagh’s “Banshees.” The bittersweet crowdpleaser, which premiered on the festival circuit earlier this year, finds the pair playing longtime drinking buddies on a remote Irish island who have a falling out.

When fiddle player Colm (Gleeson) decides to terminate his friendship with Pádraic (Farrell), it leads to a spiral of drunken rage and bloody vengeance. Interspersed with folk music interludes, lush island greenery, and many pints of stout, the movie teeters on the edge of Irish stereotypes while grounding them in authenticity.

The actors said they welcomed that challenge. “It’s a total accident where you’re born,” Gleeson said. “However, I’ve never seen it as more than a unifying way for people to express themselves.” The 67-year-old actor said he was reticent to host “Saturday Night Live” to promote the movie earlier this year, worried that he might wind up mocking his heritage, but Farrell goaded him into it.

“I didn’t know who I was supposed to be,” Gleeson said. “I finally came up with the idea that the easiest way to be was that I could be kind of a version of myself.” He was happy with the results. “I like embracing my Irishness because it helps me express myself,” he said.

Farrell chimed in. “It’s funny, isn’t it?,” he said. “How much do you invert it and how much are you raw and being yourself?” Farrell, who last hosted “SNL” in 2004, has maintained a complex relationship to his background as many of his roles conceal his accent. “I’ll never understand why I’ve had the opportunities I’ve had,” he said. “I’ve done some parts that I would hope on the page are very different from who I am as a man, but I’m only ever leaving the port of my own experience. Your judgements, your prejudices, your hopes, is in everything you create.”

Both actors said that while the movie has its fair share of funny moments, they don’t register that way for the characters. “This was heartbreak, basically, an acute soul distress for both of us,” Gleeson said. “I start from a place of pure desperation, which is that I have to finish this relationship. I don’t think it’s that I don’t like him anymore. I say that to him because I don’t know how else to say that to him. The friendship has to end.” Farrell added: “The majority of acts of violence committed in this world are committed by people who have been hurt.”

Gleeson said he noticed that his character’s violent threat — he claims that he’ll mutilate his own fingers if Pádraic keeps speaking to him — paralleled the plot device of McDonagh’s 2010 Broadway show “A Behanding in Spokane,” which starred Christopher Walken as a man searching for his missing left hand. “I said, ‘What’s going on with the hands, Martin? That’s twice now.’ He said, ‘Well, writers have nightmares the same way actors have nightmares about waking up onstage and you can’t remember the line is.’”

Watch the full video conversation between Farrell and Gleeson from IndieWire’s Awards Season Spotlight series above. “The Banshees of Inisherin” is now in theaters and available on digital platforms.