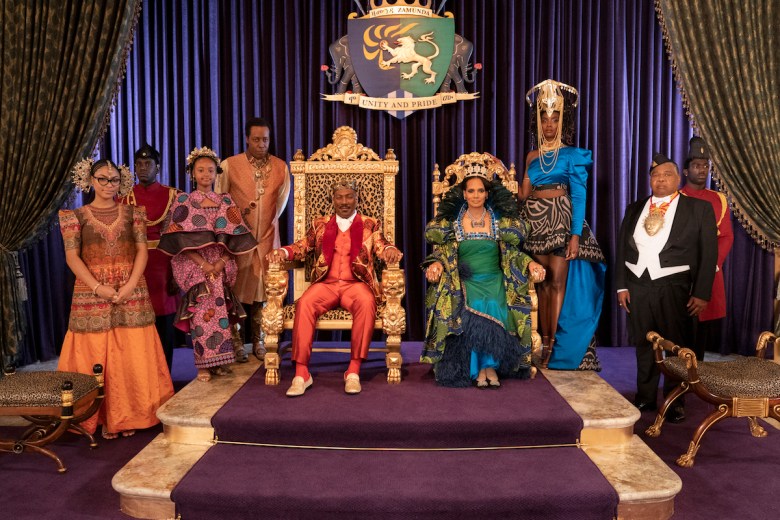 Consider This: Conversations highlight film’s award-worthy productions through panel discussions with the artists themselves. The above video is presented by Amazon Studios and hosted by Jim Hemphill. “Coming 2 America” is now streaming on Prime Video.

One of the many pleasures of “Coming 2 America,” the long-awaited follow-up to the classic Eddie Murphy comedy “Coming to America,” is the way that it both pays tribute to, and expands upon, the stylistic traits of the original film. The infectious enthusiasm that the sequel expresses regarding its source material is no coincidence; everyone involved in the movie shared a strong connection to and love for the 1988 original. “I was definitely a fan going in,” hair department head Stacey Morris enthused on a recent panel. “It was the first time that I saw images of African-American people on screen that inspired me.”

For Morris’ co-hair department head Carla Farmer, the connection was even more personal: her mentor Robert Stevenson was the head hairstylist on the original “Coming to America.” “I was very proud to be able to honor his vision and to create new images for this one,” Farmer said. Character make-up designer Mike Marino grew up not only as a fan of the first film, which featured ground-breaking work by one of his heroes, Rick Baker, but of Eddie Murphy’s stand-up routines and costar Arsenio Hall’s late night talk show. “When ‘Coming to America’ came out, I was obsessed with it,” Marino recalled. “I was already getting into makeup, so I really dug into who Rick Baker was — I wanted to be Rick Baker. So doing [the sequel] was like a waking dream.”

Marino noted that getting the job was as much about being sensitive to Murphy and Hall’s needs as it was about the technical work of creating their makeup. “It’s a personality thing, getting along with Arsenio and Eddie,” he explained. “I’m with Eddie for five hours, and I’m with Arsenio for four or five hours. You have to know when to talk and when not to talk.” Farmer concurred, pointing out that the makeup trailer “is the first place [the actors] enter in the morning, so it’s very important that you set the tone.” Morris added, “If we as a crew have a synergy that transfers to the actors and they feel like they have a comfortable environment where they can perform. You have to be a people person and figure out what they need each day and adjust.”

For all three artists, one of the challenges and gratifications of working on “Coming 2 America” was building on what came before. In Marino’s case, he had to come up with new incarnations of classic Eddie Murphy and Arsenio Hall characters like the original film’s barbershop patrons and “Sexual Chocolate” lead singer Randy Watson. “That’s a hard thing, because people already have expectations and have fallen in love with the way those characters look,” Marino said. “If you change that to be something completely different, even if it’s technically better, people are going to hate you.” His solution was to take the template Rick Baker set and then take it forward 30 years in the most realistic way possible.

Morris and Farmer also had to work with established looks when it came to the characters in the kingdom of Zamunda, but the new film’s neighboring country of Nextdoria gave them opportunities to try new things. “The hair on Zamunda in the original film was European and American influenced,” she explained, “but in Nextdoria we got to exemplify some other looks – more Afro-centric and edgier elevated urban looks. It was amazing to go off of what “Coming to America” was before and bring it up to now, but also have the freedom to create these new characters and this new world.”

This Article is related to: Awards, Video and tagged Coming 2 America, Consider This Panels