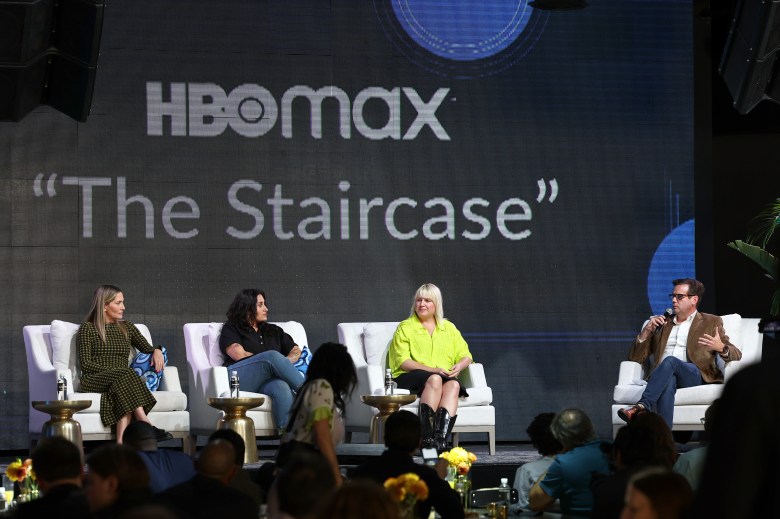 When making movies and TV shows about real people, there is always a level of pressure to accurately capture their looks. That pressure only increases when there is already a beloved documentary made about your subjects.

Such was the case with HBO Max’s “The Staircase,” a limited series starring Colin Firth and Toni Collette that took inspiration from Jean-Xavier de Lestrade’s landmark 2004 docuseries about the Michael Peterson murder trial. The show was never intended to be an adaptation of the documentary. Rather, it’s a scripted series that explores the way media, including the documentary that inspired it, can have a complicated relationship with the truth.

While “The Staircase” always made it abundantly clear that it was not a remake, the team was well aware that comparisons would be inevitable. While the scripted show makes a point to diverge from the docuseries in terms of structure and plot, certain moments would have to be recreated. And the show’s department heads understood how important it was to get those moments right.

In certain scenes that are essentially reenactments of historical events accuracy was paramount.

“If you’re recreating something as horrendous as the night of her death, and what everything looked like and what they wore, because it was all documented… we had to recreate it as close as possible,” said Starzyk.

But in many other moments, the team took a bit more creative license, designing costumes that matched their visions for the fictionalized versions of these people.

“There is a documentary, why would we recreate it?,” Starzyk said. “Go watch the documentary! We’re making our own version of the story.”

In the end, Cohn felt comfortable with that decision, and felt that the marriage of fact and fiction was the strongest way to put a new spin on the material.

“It’s basically just allowing the viewer to know, ‘we got you,'” she said. “We’re telling a story that is familiar, but then we are making decisions that are taking you down a path that you wouldn’t have anticipated.

Watch the full video above.

IndieWire’s Consider This FYC Brunch brought together cast and creative team members from five of television’s most prestigious shows to discuss the art and craft of TV production. In addition to “The Staircase,” other featured shows included Amazon’s “Outer Range,” Apple’s “Pachinko,” Showtime’s “Yellowjackets,” and Hulu’s “Pam & Tommy.”

This Article is related to: Awards and tagged Consider This, Consider This Panels, FYC Brunch, HBO Max, The Staircase