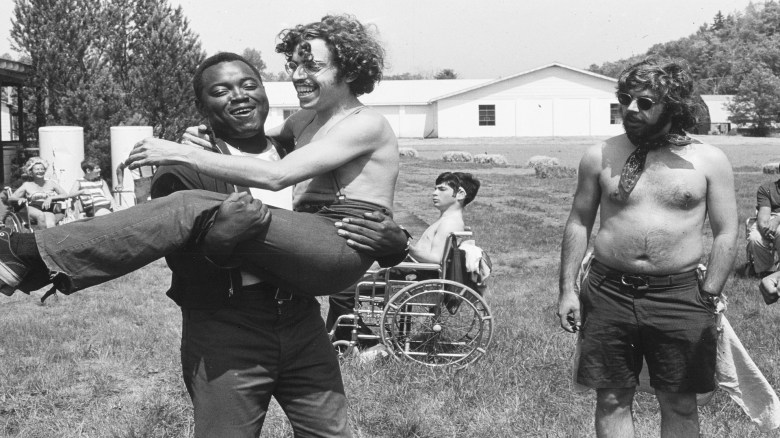 Co-directors Nicole Newnham and James Lebrecht had been working together for several years as a director and sound mixer/designer respectively, before they embarked on the making of “Crip Camp: A Disability Revolution” as equal creative partners. That change in their collaborative relationship happened when Lebrecht, a disabled man himself, introduced Newnham to disability culture and community, and specifically to the New York summer camp he had been a part of in 1971 with other disabled youth.

Lebrecht told Newnham about the camp, which was down the road from Woodstock and had the same hippie energy. Beyond the abundant drugs and sex, what attracted him to the group was the sense that counselors and the campers were all equal. Hearing his anecdotes, Newnham knew that in order to tell this story Lebrecht had to be on board as co-director.

“He offered up a very intriguing theory, which was, “I think there’s something about this sort of profound [liberating] experience of this camp that is connected to the people who made an exodus out to Berkeley and became involved in the disability, civil rights movement.’ And the combination of those two things seemed like it could be a really intriguing documentary,” said Newnham during a Q&A as part of the International Documentary Association’s annual screening series.

To construct this documentary about a mostly overlooked chapter in recent American history, the filmmakers initially collected hundreds of black-and-white photographs that people had compiled on Facebook over the years. Yet, they felt this wouldn’t be enough to recreate the experience of being part of that moment in that place and to deliver a mash-up that was equal parts “The Breakfast Club,” “Wet Hot American Summer,” and “The Times of Harvey Milk.” But when they discovered that a group known as People’s Video Theater has shot video footage at the camp, they tracked down one of their members in San Francisco and eventually gained access to five and a half hours of content from the time. Watch the video of Lebrecht and Newnham’s interview with Editor-at-Large Anne Thompson above.

The experience was singular for Lebrecht, who was able to relive his younger years through the making of this project. “I was seeing people and things I hadn’t seen in 45, some odd years. And there are people there that I was close with who are no longer with us,” he explained.

While this was Lebrecht’s first time in the director’s chair, he embraced the role fully, including serving as the main interviewer for the talking-head segments based on questions he and Newnham put together. “I felt a huge sense of responsibility to really do it right, do it thoroughly to be very inclusive. And this is something that Nicole and I both shared very deeply,” said Lebrecht. At one point in the production, the duo decided that since Lebrecht was part of the story they were telling, he would also be one of the subjects. His friend and writer Denise Sherer Jacobson, who was also part of the camp and is featured in the film, was tasked with interviewing Lebrecht to keep him grounded and true.

Another one of the film’s protagonists is Judith Heumann, a prominent disability rights activist and Lebrecht’s camp friend. For the filmmakers, showing her as an integral part of the camp and later as an important figure in the 504 Sit-in for disability rights would evidence that her approach and demeanor never changed. Finding all of the scraps of footage to assemble Heumann’s segments was a laborious effort. In the end, structuring the film meant striking balance between all of the fascinating people featured so that it didn’t become Heumann’s biopic or Lebrecht’s personal piece.

While not an all-encompassing work, “Crip Camp” acts as a powerful introduction to a moment in history that has been unfairly forgotten and neglected. “This hasn’t been something that people have paid attention to,” added Newnham. Ultimately, their goal is “increasing engagement and advocacy around media representation of people with disabilities and also access for filmmakers with disabilities within our own documentary world.” Through the support of the Obama’s production company Higher Ground and Netflix, their distributor, Newnham and Lebrecht’s hope is that the message of inclusion reaches far and wide.