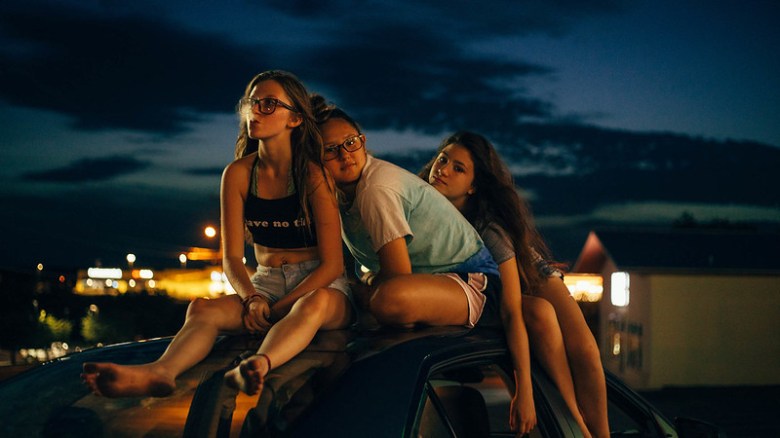 A few summers ago, directors Isabel Bethencourt and Parker Hill were on a road trip from Montana to Austin, Texas. Late one night, they stopped to get gas and a group of boisterous girls, clearly having fun to loud music, jumped out of a car.

The NYU filmmakers, also photographers, were attracted to their lively energy, so they struck up a conversation and asked if they could take their photo. An invitation to a nearby party where they got to know them more profoundly ensued. From that fateful encounter in small-town Texas emerged their debut documentary “Cusp,” which premiered at the 2021 Sundance Film Festival and is available on Showtime.

“They were a burst of youthful freedom and so we stayed in touch, shot what we thought was going to be a short doc, and then just really loved being there and expanded it to a feature,” said Hill during a virtual Q&A as part of the International Documentary Association’s annual screening series.

The three teenagers — Brittney, Autumn, and Aaloni — agreed to be filmed even though they initially were skeptical about what made them ideal subjects for a documentary. “They’re like, ‘You have the wrong kids. We’re not meant to be in a documentary.‘ And we were like, ‘No, that’s exactly what we want to look at because you guys are sort of indicative of what’s happening in many small towns in America,’” Bethencourt recalled.

Fascinated with the notions of what it means to be an American teenager often portrayed in movies, the directors’ main formal rule was to pursue authenticity. Every sequence had to center the girls’ perspective to comprehend the significance of every situation, whether it was a party, a chat between friends, or an argument with their parents.

“We were interested in talking to real kids and trying to understand one step further and then another step further of what it actually means,” added Hill. “And part of the whole process of making this film was absolutely learning some of the darker realities of what it’s like. It’s not just all pickup trucks and backroading and having a blast.” Watch the video of the directing duo’s interview with Vox’s film critic Alissa Wilkinson above.

While the finished film exists as an observational portrait, the team conducted several interviews with each girl, which helped the artists understand the issues affecting them. One key issue “Cusp” unveiled for Bethencourt and Hill was the normalization of non-consensual sexual experiences among young women in this community, so much so that it was casually discussed at parties as something that happened to nearly all of them.

“It was so shocking, even though we had had all these conversations, we realized that that’s what it is to be normal. We were in the room and it didn’t feel that weird for them to say certain things,” said Bethencourt. “And then you turn around and look at full footage and talk to them again… we started to understand the real gravity of it.”

Early on, Bethencourt and Hill agreed to only film the girls during a single summer, instead of following them over the course of several years. Their intention was to capture a snapshot of their lives at that very moment, the essence of adolescence outside of the constraints of school and other responsibilities.

This also provided them with a natural arc. Hill compares it to a yearbook that preserves a specific time. The images of quotidian life, get-togethers with friends, and heart-to-hearts they captured were enhanced by the area’s vast landscapes and the buttery light of its sunsets.

“Even while you’re a teenager you’re nostalgic for last weekend, and we really wanted the way it was shot to feel like a memory and to have people remember their youth, like sticking your head out the window while your hair’s in the wind,” noted Hill. “[And] we really wanted the richness and the vibrancy as this juxtaposition to some of the darker realities that these girls and teenagers are facing.”