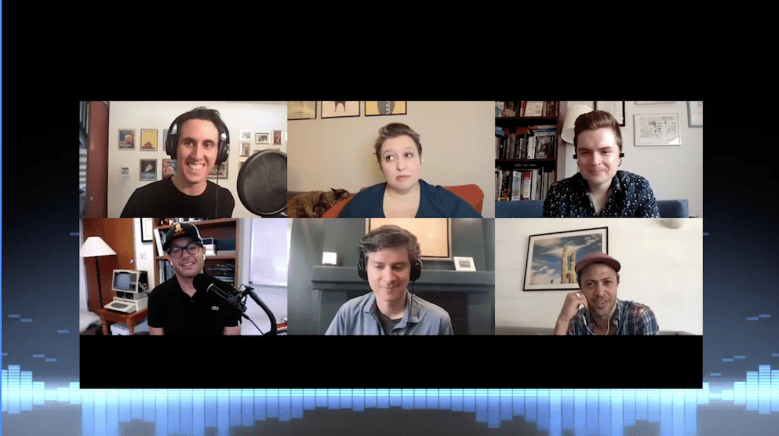 Emmy-nominated writer and future showrunning superstar Cord Jefferson has not one, but two of TV’s most dynamic and influential showrunners singing his praises and proffering advice as needed. But according to them, Jefferson’s promise was clear as day. It was just a matter of putting him to work.

Mastermind of HBO’s “Watchmen” limited series Damon Lindelof and Michael Schur, who put, I guess, Hell, on the map with NBC’s “The Good Place,” are both Emmy-nominated in their own right this year, and they have more than just employing Jefferson in common. A lot more. They’re very similar, actually.

The point being, it’s no coincidence that Jefferson worked on “Watchmen” immediately after the completion of the final season of “The Good Place,” largely because it was Schur who introduced him to Lindelof.

Schur and Lindelof’s friendship began as a meeting of mutually-admiring minds. The latter reached out to the former as “Parks and Recreation” was ending because he was such a fan. A year later, the former set-up a lunch to play a game he called, “Is This Anything?” and in this case, the this in question was the concept for “The Good Place.”

After admiring his work on “Master of None,” Schur hired Jefferson and eventually introduced him to Lindelof. The rest, as they say, is history.

But what has Jefferson learned about showrunning while working with two industry giants?

He discussed his thoughts on this week’s episode of “Millions of Screens,” IndieWire’s TV podcast, where he was joined by his two former bosses to discuss the intricacies of creating and overseeing a show and trying to create something great.

When asked which mentor was a better boss, Jefferson officially hedged — though how much truth is in his given answer remains up to the listener — before illuminating the diverging strategies that both Lindelof and Schur utilize while in the writers room.

“I share a lot in common with Damon — I hope that you don’t think I’m speaking out of turn here by saying this, Damon — but I’m a very neurotic person. I wear my heart on my sleeve. I have a lot of anxiety and I think that I’m very open about that anxiety and Damon is very much that way,” Jefferson said.

“There would be days when Damon would say in the writers’ room, ‘You know what? I think we’ve made a mistake in attempting this. Maybe it was a mistake to do the show,’ Which is like, you know, it’s–“

“But at the same time, I appreciated that because I’m a man with a bunch of my own neuroses,” Jefferson said. “And so I appreciate it. It never felt like you were dispassionate. It felt like you felt that way because you loved what we were doing and you love ‘Watchmen’ so much and you really wanted to make the work as good as it can possibly be.”

“Mike, on the other hand, a thing that I really love about Mike as a boss is that you are the opposite,” Jefferson said. “I’ve never truly in my life met somebody who’s more even keel. I’ve never come across somebody who is calmer under pressure, who just sort of exudes ease and exudes the feeling that everything is going to be alright, truly.”

“I think that that I’m a kind of person who I sort of feel that anxiety deeply,” Jefferson said. “And Mike, if you feel that you you never, ever let on that you’re feeling that, and I think that the confidence that you exude just bleeds into the room and makes everybody feel that way also.”

But there’s a greater question lurking just below the surface. Since Jefferson now has his own series to showrun — “Scraper,” inspired by Jefferson’s experiences working at Gawker and reportedly in development at Apple TV+ — is he more of a Damon showrunner or a Mike showrunner?

You can find out for yourself on this week’s episode, which features a cut-down of the extensive conversation between the three guests, with brief interludes from co-hosts TV Awards Editor Libby Hill, TV Deputy Editor Ben Travers, and Creative Producer Leo Garcia, of course. In keeping with ongoing social distancing mandates, this week’s episode was again recorded from the comfort of everyone’s respective Los Angeles-area apartments, and we’re again offering viewers a video version of the podcast, as embedded above.

Tune in to hear the “MoS” crew discuss the latest “Tiger King” related project in the works, as well as a reunion of “The West Wing” that no one but Travers was asking for.

Again, completists, take heart. The extended-cut of the Jefferson/Lindelof/Schur conversation, complete with irrational fears, hot (fruit) takes, and the world’s worst throuple will be available later this week. If that doesn’t (fish)hook you, nothing will!

This Article is related to: Awards and tagged Direct, millions-of-screens-45, Podcasts, The Good Place, Video, Watchmen