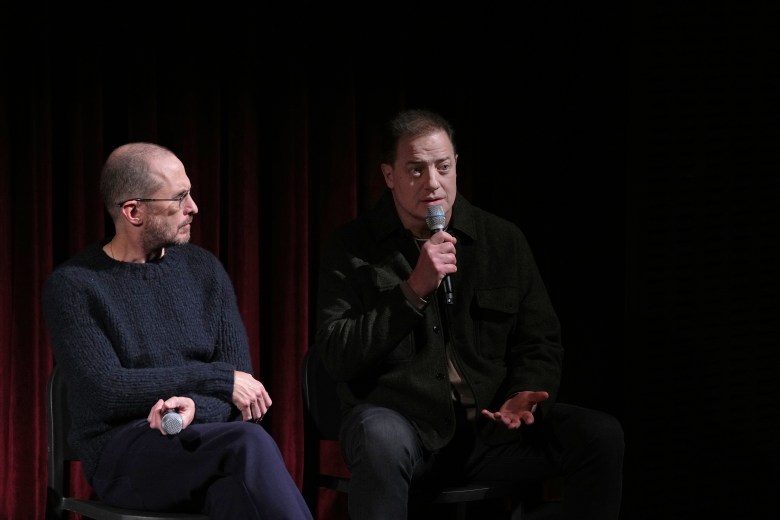 Brendan Fraser wore a prosthetic suit to play a 600-pound man in Darren Aronofsky’s “The Whale,” but the intense physical preparation started much earlier, at the actor’s home. It was there, in a small apartment above his garage, that he began to understand what “The Whale” would demand from him. “It had to be very specific,” he said during an interview with IndieWire alongside his director. “Otherwise, it strikes a false note.”

That risk was the core gamble of “The Whale” from the outset. While screenwriter Samuel D. Hunter adapted his own play that drew from his experiences as a closeted gay man with an eating disorder, the decision to cast an actor who wasn’t obese meant that the movie would face accusations of exploiting its protagonist’s conundrum. Knowing the odds, Fraser immersed himself in the process long before production began.

Fraser outfitted his apartment to look roughly similar to the home where the entire movie takes place. Aronofsky mailed the actor boxes full of weights to wear during that early rehearsal process, which started in the midst of COVID shutdowns, including a “kevlar-style” vest that he wore around his chest as well as additional weights for his ankles and arms, “so that I could have an appreciation of what’s hanging on my body.”

Fraser was also visited at his apartment by movement instructor Beth Lewis, a former dancer from the Pilobolus Dance Company. Since Fraser’s character spent most of the movie sitting still, Fraser and Lewis developed an understanding of where “the center of gravity is while seated,” Fraser said, “and what it would take for the man just to get up. Taking to his feet is a monumental event for him and he can’t do unassisted until he’s asked to.”

As Charlie, the reclusive English teacher originally envisioned by screenwriter Hunter in his play, Fraser brings a level of vulnerability to the part that works in tandem with the inherent riskiness of the subject matter. Aronofsky said that was part of the reason he was drawn to cast an actor who had been out of the public eye for some time. “There was really no actor that got me out of bed in the morning to make this film,” the filmmaker said. “He hadn’t been given many opportunities of late and he wanted to work. Emotionally, you have to do so much from joy to sadness to despair to selfishness without an ounce of cynicism. I knew I needed an actor who really wanted to get back to work.”

“I think I’m not quite the ‘Encino Man,’ ‘George of the Jungle’ generation,” Aronofsky said. He also missed out on the occasional dramatic roles for the actor, such as “Gods and Monsters,” which came out while Aronofsky was busy on the promotional tour for the release of his 1998 debut “Pi” (which the director plans to rerelease next year for its 25th anniversary). It wasn’t until he was in post-production for “The Whale” that Aronofsky caught up with Fraser’s performance in 1992’s “School Ties,” which provided quite the contrast. “It was one of the craziest things ever,” Aronofsky said. “I had gotten to know Brendan really, really well.”

When figuring out how to frame his actor, Aronofsky said he often worried that audiences would detect the makeup, prosthetics, and CGI. “The human eye is incredibly sensitive,” he said. “We had use rely on the physics of how you get up to retain the illusion.”

When production finally got underway, the fraught climate of the pandemic enhanced the intensity of the shoot. “We were able to perform in a way that surprised me,” Fraser said. “Given the very existential threat that we all lived under, [we realized] we better give it everything.”

Despite the bleak subject matter, Aronofsky insisted that the character’s ability to find constructive ways of engaging with his estranged daughter (Sadie Sink) meant that the movie wasn’t all bad vibes. “Charlie actually succeeds at having an impact on the world,” Aronofsky said. “In today’s world there’s a lot of anxiety and fear and a lot of disconnection, but I believe that can really flip in a minute.”

Watch the full conversation for IndieWire’s Awards Season Spotlight series above. “The Whale” is now in theaters from A24.