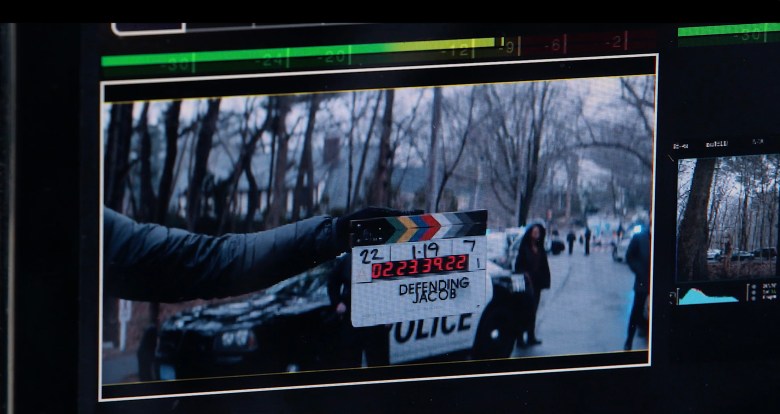 With a courtroom drama it is up to the actors to not only create dramatic performances, but infuse them with empathy and genuine sentiment. That’s already a tough feat, let alone when your series follows a couple struggling to overcome the issues that pop up when their only child is accused of murder.

All adaptations require a fair bit of transformation, and that was the case when creator Mark Bomback and director Morten Tyldum set out to adapt William Landay’s popular novel, “Defending Jacob.” One of the key changes was the set design, a fact aided, according to Bomback, by having Tyldum direct all eight episodes of the series.

In a new first look video on the series, Bomback says there was a “uniformity of vision” by having Tyldum oversee the series that feels “incredibly cinematic.” “We created a show that has a very strong aesthetic,” says Tyldum. “We made people silhouette-y and dark, stuck in their own prison.” The costume design also proved challenging, according to Bomback, because it forced the discussion of “how do I make them feel as realistic as possible?”

Tyldum says “Defending Jacob” is certainly a murder mystery, but one reliant on how the characters experience every facet of the process, from initial accusation to the court trial and public fallout. There was a desire, according to Bomback, to not make the characters feel like parodies. It is a testament, says Tyldum to the lead actors who are a part of the project. “Chris [Evans] brings both a strength and a vulnerability to the character [of Andy Barber] which is really hard.”

Evans is similarly praiseworthy of Michelle Dockery, who plays his wife Laurie. “Michelle is just so open and very honest. And between Jaedan [Martell], the other actors, everyone, they’re so fantastic.” Dockery describes the process like live theater. “You have these kind of big, long two-hander scenes which are written so beautifully.” “These actors have that ability, not just to embody the complexity of these characters,” says Landay. “But to project out from the screen and connect with the viewer.”