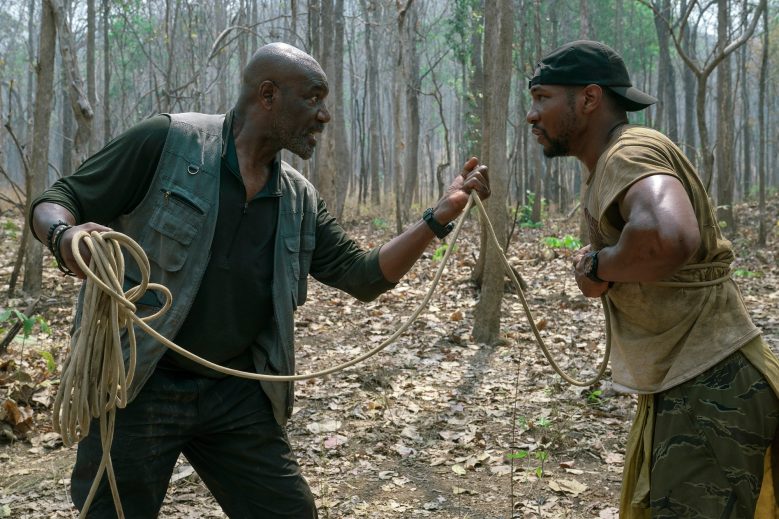 Delroy Lindo ran as fast as he could in the 100 degree Thailand jungle heat. So did Chadwick Boseman, a much younger man playing his real age, but not revealing to anyone that he was battling terminal cancer.

For reasons of budget as well as inspiration, Spike Lee took his band of 60-something brothers back 50 years to play their younger selves in the film’s extended flashbacks to their fighting years in the Vietnam War as they relive a traumatic incident that still haunts them, the death under friendly fire of their charismatic young leader, Stormin’ Norman, played by Boseman.

“I understood why he did not want to be treated differently,” said Lee in our video interview (above). “I was telling him, ‘you have to run like fucking Usain Bolt.’ If I know my brother is terminally ill, how can I tell him? Chadwick understood that. We didn’t discuss it, we had been shooting six weeks. He’s coming in, we’re rolling, we’re tight-knit. ‘I played Jackie Robinson, James Brown, the Black Panther, Thurgood Marshall. I ain’t running.’ Nah, he was like, ‘Spike. I’m here to do my job, whatever you tell me to do, I’ll do it. That was a lot of running in that scene! A lot of takes. I knew the actors were not loving me that day.”

Lindo, who is now 68, admitted that “it was exhausting at times when one was tired…We didn’t use the stunt guy. I ran as fast as I could, 20 years ago I would have been that much faster. The struggle and obstacle of being exhausted all played into the scene. Spike wasn’t going to shoot it from the back with a stunt guy, he shot me and my struggle.”

The actor is proud of what he and his comrades accomplished, running from a downed chopper for cover, firing off rounds at the enemy. “They were so heroic,” he said. “We don’t get to do this. We have this opportunity. It’s not fanciful, it’s something true to life, the light has never shown on the brothers and what their contribution was.”

Shooting in Thailand under duress made the cast and crew bond together. “When you shoot it on location halfway around the world you get tight,” said Lee.

“Where you gonna go? On location tight.”

“All you have is each other,” said Lindo. “Spike let me run. He let the actors run. He gave them the ball and: ‘go to the hoop, just go!'”

Lindo and Spike Lee go way back. They first met at a New York callback audition with Denzel Washington for “Malcolm X” (1992). Lee had seen Lindo on Broadway as Harold Loomis in August Wilson’s “Joe Turner’s Come and Gone.” And he came back to the British-born transplant to play his own father Bill Lee in his Brooklyn autofiction “Crooklyn.”

Lindo was gobsmacked. “After West Indian Archie, this was a completely different type of person to play in Brooklyn, almost a 360,” said the actor. “At this point Spike is telling me I’m a good enough actor to have played a Jamaican gunrunner in one film, with the ability to play a New York musician.”

So it’s no surprise that Lee turned to Lindo to deliver another about-face in “Da 5 Bloods,” taking on Paul, a larger-than-life tormented Vietnam veteran, traumatized with PTSD, who returns to the Vietnam jungle with his brothers in arms to track down treasure they buried decades ago in the killing fields. Lee assembled a powerful ensemble including another Lee regular, Clarke Peters.

Lee was meant to premiere this rip-roaring fable about four Big Red One infantrymen out of competition at Cannes 2020 as he presided over the Competition jury. Instead, the well-reviewed movie (82 Metascore) went straight to a June 12 Netflix release. COVID-19 pushed back the Oscars 2021 calendar by two months, but this mid-summer release is still in the mix, scoring Best Film, Director, and Ensemble at the National Board of Review, Best Actor and Supporting Actor at the National Society of Film Critics Awards, a coveted SAG Ensemble nomination for the cast led by Lindo and a Supporting Actor nod for Boseman, and six Critics Choice nominations: Lee for Picture, Director and Screenplay, Boseman, and Lindo, who won Best Actor at the New York Film Critics Circle as well as The National Society of Film Critics.

Lee and his Oscar-winning writing partner Kevin Wilmott (“BlacKkKlansman”), a University of Kansas professor, took over the war script from screenwriters Danny Bilson and Paul De Meo. “I knew we were long overdue for a film to deal with this amoral war from the eyes, lips, and spirits of these Black soldiers,” said Lee. “I knew Marvin Gaye’s album ‘What’s Going On?’ [1971] would be the spine of it. A lot of songs deal particularly with the Bloods coming back from Vietnam; Gaye’s older brother Frankie did three tours in Vietnam and was a radio operator, writing to his brother. It had an impact on him.”

“Da 5 Bloods” juggles time and space, comedy and tragedy, and love and war in this far from conventional narrative. “Conventional?” said Lee. “You’re getting me mixed up with somebody else!”

“Conventional and Spike Lee do not belong in the same sentence,” said Lindo.

“I do not have a mindset,” said Lee. “I should not put creative handcuffs on me. I’m not saying throw shots in the pot and throw it around and it’s a gumbo. It takes great actors, number one. I don’t care what you do, they got to do the dirty work. I like a lot of stuff, I never want to do one thing. As years have moved forward, several films add a documentary element. I did that a lot with this one.”

Lindo’s Paul feels like a Shakespearean or Wilsonian character who contains multitudes as he explodes with stentorian pent-up rage. “The size, the magnitude of the characters that [August Wilson] writes and presents to the actors to escalate,” said Lindo, “the depth of the torment inside Harold Loomis, Othello, any of the great tragic parts, lives inside of Paul. Actors kill to play a part like that.”

Angry is not the word Lindo would use to describe his volatile character. “I would use the word tormented,” said Lindo. “There’s a torment that has a tendency to manifest in these various ways. My job was to find the basis of that torment.” Jonathan Majors plays Paul’s estranged son who travels with the ex-soldiers on their Vietnam treasure hunt, and in one terrifying scene, steps on a land mine as the group struggles to extricate him. “I’m a man who experienced the loss of my wife in childbirth, the estrangement of my son, another form of loss, and the vilification of myself and the vets when we came back to America.”

“They were spat on and told we don’t appreciate you,” said Lindo, who channels Paul’s point of view as he explains why the character became a red-MAGA-cap-wearing supporter of Donald Trump: “The totality of cumulative demonization I have experienced, estranged from the society I went to war to protect, I come back and I’m completely rejected. I volunteered! In the face of this sacrifice I made for the country I loved, I’ve been kicked in the ass over and over again. This results in disenfranchisement and disconnection, when this person comes along — ‘I can make this better for you’ — I needed a win, that was the basis of my political ethos.”

Lee wanted to throw into the bonded vets “a little chink in the armor, a flavor,” he said. “He voted for Agent Orange. That hat is worn not only on the head of Paul, that hat moves around.”

Finally, the “Da 5 Bloods” team, whatever their disagreements, “brothers going to work it out,” said Lee. “[The shoot] wasn’t easy. Whatever was there, the snakes, the heat, we had a job to do.”

“You’re built for this,” said Lindo.