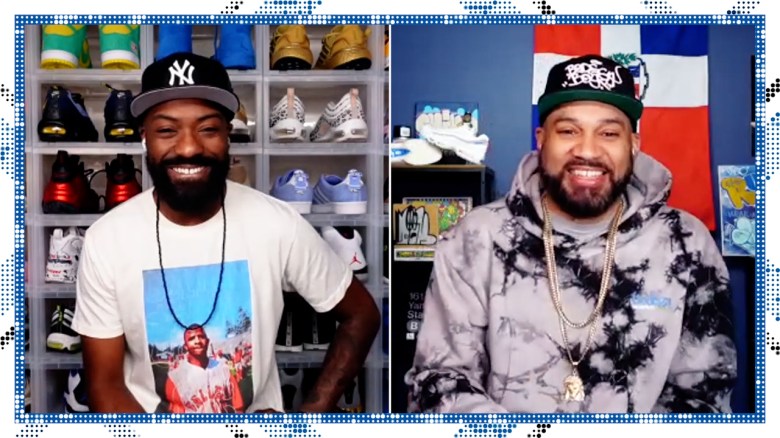 Let me be straight with you. I could sit here and pen an essay singing the praises of Desus Nice and The Kid Mero, the Bodega Boys from the Bronx who have taken their easy friendship and engaging comedy style and steadily built it out into a burgeoning pop culture brand. But my glowing praise of the rapid-fire witticisms and enveloping environment crafted by the duo week after week is but a pale comparison to the self-evident brilliance the pair display even in the midst of a press blitz.

So instead of trying to capture the incandescence of the two men and the friendship that fuels their humor, let’s instead focus on what they’ve accomplished in the past year.

“Desus & Mero” launched on Showtime in February 2019 and aired 45 episodes in its first season, but just a handful of episodes into Season 2, which premiered February 2020, the series was forced from its home in the revamped Al Jazeera studio and left to largely produce the rest of of its second season, as well as the first dozen episodes of its third season, via remote resources like so many other late night shows.

In reality, when IndieWire spoke to both men for a recent interview, it was with the realization that at that juncture, Desus and Mero had now produced more episodes of their show via videoconferencing than they ever did within the comforts of the studio.

The idea alone boggled their minds and they likened it to the hyper-obscure factoids dropped in the midst of a particularly slow inning of baseball.

“We’re on hiatus now but when we come back we’re going to be in the studio,” Nice said. “We’ve figured out how to do it. We got to do the rapid tests and everyone has to have the tests in Zone A. “But we’re both vaccinated, we’re ready.”

“That [stat] is mind-blowing. Mero, does it feel like we did more?”

“It does not,” Mero said. “And that’s why it’s such a bizarre stat, because in my mind the pandemic year, years … Because it’s going on two, seems just like this one long week. It’s bonkers. You wake up everyday and you’re like, ‘Yo, what day is it?’ I’ve done this and looking at my phone to see what day it is, what date, more than I’ve ever done in my entire life. So, like Desus was saying, it’s shocking to even be like, ‘Yo, really? For real? That really happened?'”

And yet, the pair accomplished far more during the pandemic than simply growing the show. September 2020 saw the publication of their first book, titled “God-Level Knowledge Darts: Life Lessons from the Bronx,” full of life advice and laughs and quickly became a New York Times bestseller.

It was far from the only away that Desus & Mero’s writing chops were celebrated in recent months, with the pair and the show’s writers room winning a Writers Guild Award for Comedy/Variety Talk Series. The pair were particularly taken with the win, given that it comes from peers, among the highest endorsement you can receive within the industry.

“To hear that from other writers, it means the world,” Desus said. “So we do not take it for granted.”

But when it comes to detailing what makes both Desus and Mero just so special is a task better suited to the long-time friends, as evidenced in the video at all. Check it out and witness the talent that drives one of TV’s finest series.

This Article is related to: Awards Spotlight Spring 2021 and tagged