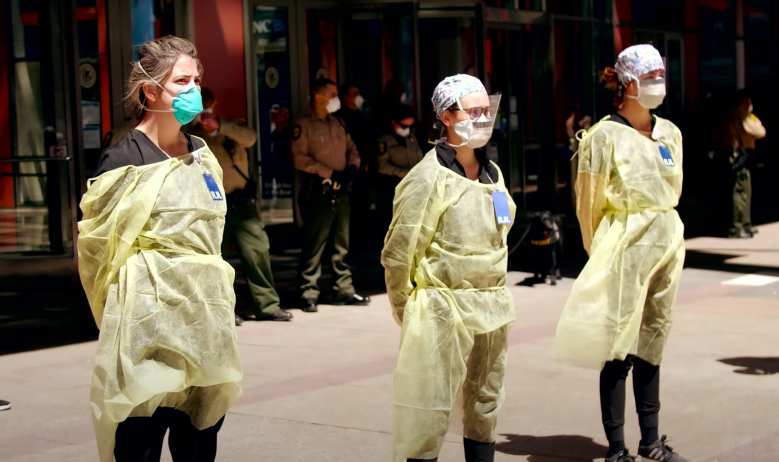 Like most years for the last decade, director Nanfu Wang flew to China in January 2020 to visit her family for Chinese New Year. She was traveling with her son, who stayed on to spend time with Wang’s mother. Or that was the plan, until her family got caught in the onset of the COVID-19 pandemic. Her personal experience would serve as key element for her latest documentary “In the Same Breath.”

“On the day of the lockdown of Wuhan, I had come back to the U.S. and left my son with my mom in China, so the next few days were a frenzied time trying to figure whether the virus was serious and what we needed to do to make sure that my son was safe, and my mom was safe,” Wang said during a virtual Q&A as part of the International Documentary Association’s annual screening series.

Wang had returned to attend the Sundance Film Festival as a member of the jury, alongside producer Jialing Zhang, with whom she worked on “One Child Nation.” But as news of the virus spread on social media, the two of them became increasingly concerned. Familiar with the Chinese government’s tactics of controlling every narrative and censoring information, they began archiving material posted to social media from inside China before they were taken down.

With that material in hand and determined to share what they knew with the world, Wang and Zhang decided to make a full-length documentary, before there was any indication this would become a worldwide crisis.

Unable to travel to China themselves, the first obstacle was assembling a team of filmmakers on the ground to capture footage of what was unfolding in Wuhan. That was a tall order. “We had to find local Wuhan cinematographers and they needed a permit to get on the road, to rent an apartment, or to film anywhere in the community or inside a hospital,” said Zhang.

Conversations with those DPs determined what they could film, but, more importantly, what they were willing to film considering the possibility of retaliation. Within those limitations, the goal was to present the truth, or to approximate it as much as possible, as the events happened in real time. Shooting inside the medical facilities where COVID-19 patients were being treated became the unique challenge.

“The hospital was very interesting because it did take quite a while to get the access and then when we did, the initial reaction, as you can see both on camera and behind the camera, was that there was a sense of self-censorship,” said Wang. “People didn’t want to talk about negative stories; people were very concerned about anything they shared that seemed critical of the government.” Watch the video of the conversation between the filmmaking team and IndieWire Editor-at-Large Anne Thompson above.

After the film was completed, many of Wang’s family members were interrogated and threatened by the Chinese government, as were several of the people involved in the production, some of whom had to drop out of the project altogether.

As early as February 2020, before the pandemic had fully reached the American shores, HBO signed on to the project following conversations with Wang and her producers. Their resources allowed the director to track the situation in both China and then the United States. Images of anti-mask demonstrations showed how the advent of fake news under an incompetent administration had made the disaster much worse. For the director, the dual narrative was always about the disease of misinformation.

Although Wang had lived in the U.S. for nearly a decade at that point, she once again felt like a stranger as the preconceived notions she had acquired about this country were disproven. What she thought was a Chinese issue was clearly taking place in her adoptive home, so including the American response and denial as part of the film was crucial. “In both societies, misinformation can lead to dire consequences…politicians put their own political agenda ahead of public health,” concluded Zhang.