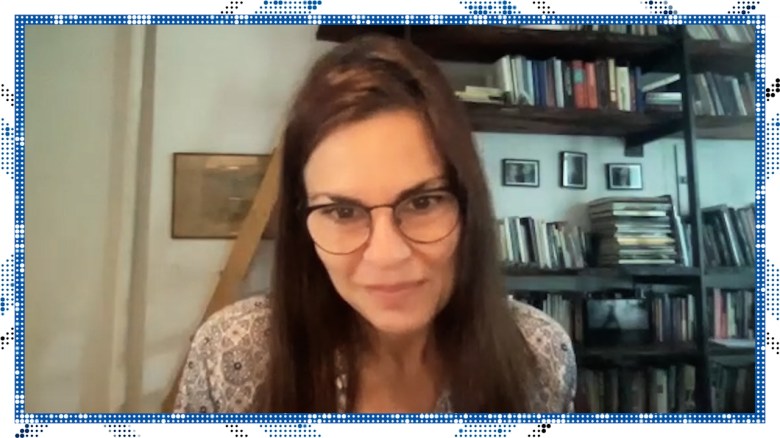 There was a bombshell dropped during the second season of Showtime’s riveting documentary series “Couples Therapy,” one that changed my view of the show’s central figure, psychologist and psychoanalyst Dr. Orna Guralnik, forever.

After watching the early screeners, I sent a simple, but urgent message out to relevant parties — TV professionals who are as singularly-obsessed with the series as I am: “Dr. Orna has a cat!”

Some people were shocked, others delighted, still others left wondering how we didn’t see this development coming.

But let’s go back to the beginning.

In September 2019, Showtime launched “Couples Therapy,” a revolutionary series that effectively captured the titular experience with couples seeking insight and guidance on their fractured relationships. That’s not an assessment to be taken lightly. On the surface, it seems impossible. How could two people ever reach the place of vulnerability and honesty required to enact change in their relationship while surrounded by TV cameras, knowing that everything they express had the potential to eventually be seen in the homes of their friends and family?

While there’s much to be said about the technical and practical lengths gone to by filmmakers Josh Kriegman, Elyse Steinberg, and Eli Despres who created the series, viewers will tell you that the key to the show’s success lay in the watchful eyes of Guralnik.

In the room with the show’s participants — not patients, an important distinction when sacrificing the privacy of therapy in exchange for reaching a wider audience who could also be aided by the revelations within sessions — Guralnik isn’t there to cure or chastise, she’s functions as a shepherd. Those in her flock are free to explore where they wish, as she guards against danger, while every now and then a sheep needs a little nudge in the right direction to get them where they want to go.

The brilliant thing about so much therapy is the ability to absolve yourself of having to invest in the other person. You pay for a mental tune-up and don’t have to care about the overall well-being of your psychological mechanic. It’s a service industry, and more often than not, being able to view a therapist as a blank screen on which to project your issues makes it all the easier to temporarily unload your shame and secrets to a virtual stranger.

That said, it’s not necessarily the case when a psychoanalyst is not your psychoanalyst, even more so when the psychoanalyst in question is prominently featured as the central figure in a documentary series, in which case you want to know every single thing about them. So it goes for Guralnik.

Nico and Speedy in “Couples Therapy”

Which brings us back to the cat.

One snippet of Guralnik’s personal life that made it into the first season of “Couples Therapy” with some regularity is her dog Nico, who is often featured settled in her dog bed throughout sessions, but making sure to get welcome or goodbye scritches from patients as often as necessary. Nico was such a breakout star, in fact, that the second season opened with her boasting her own doggie cam and sharing her adventures out and about the office and on the streets of New York.

In Season 2, when the realities of COVID-19 descend and the city shut down, forcing the series to make the transition to video conferencing like so many therapy sessions around the world, the audience — and participants — get a new window into Guralnik’s world. Like seeing your grade school teacher at the grocery store or your pastor at the gym, it was a glimpse behind the curtain and it was as magical and unnerving as you’d expect.

And so we learn that Guralnik’s world includes a cat. And I learned, in a recent interview with the good doctor for IndieWire, that the cat’s name is Speedy, that there used to be another cat who could not adapt to Nico’s addition to the family, and that Speedy is trying to make things work, maintaining a good relationship with the humans while utterly despising the dog.

Getting the scoop on Speedy was exhilarating, I’m not going to lie. But Speedy is even more important as a construct in this sense, than he is as a cat. Good therapeutic relationships are about boundaries and in light of the pandemic, boundaries established with in the larger psychiatric community were suddenly forced to shift in order to meet demand for a populace in crisis.

“The boundary is more permeable between patient and analyst,” Guralnik said, regarding the shifting dynamic during the mass shutdowns. “And everyone’s at home. I’m talking to them when they’re in all sorts of unpredictable scenes, like talking to me from a closet space, from a bathroom, shirtless with a baby hanging on them, people coming in and out of the screen.”

“And similarly, them being in my home,” she continued. “Wherever I’m speaking from, they can see what’s going on. And I’m not the type to tidy up every little thing behind me and think about all those things. I’m just living and it’s on display, which is another change in the typical boundary between analyst and patient.”

But perhaps more disruptive about the move to video conferencing is merely the lack of connection that can arise when participant and analyst aren’t in the same room. Maintaining eye contact for the whole of a session is a world away from the more dynamic ways the people express themselves unconsciously, as well as how those expressions can allow participants feel less scrutinized in the moment.

Still, it’s not all bad.

“At the same time, there’s also a certain kind of humanity and [the] gaining of the fact that we’re all in it together,” she said. “There’s a certain lack of formality that I think helps. It certainly helps my patients, helps me, helps all of us going through this incredible challenge. There are pluses and minuses.”

There is something magical about a season of “Couples Therapy” existing at this time, a microcosm of the slightly less pressing global catastrophe which is couples suddenly being together 24/7 in a confined space.

“The fact that people went through the pandemic and the lockdown was already like this burner put under the treatment that escalated issues and brought them to the fore a lot more,” Guralnik said, explaining that she spent much more time with patients this season because of the disrupted production schedule, the switch to video-conferencing therapy, then the switch back to a dedicated office space.

“And then there were new issues that were introduced because of like changes in roles at home,” she said. “Kids being at home, people losing their jobs. Matthew and Gianni talked a lot about it. Matthew, ultimately losing his job, Gianni not being able to connect with his family in Italy. The pandemic brought up a lot of its own issues and exacerbated certain issues and brought in issues that were not necessarily part of the couple’s plan to work on.”

Which is to say nothing of the wider issues of institutional racism and privilege that ripped through the country in 2020, all of which carried their own psychological toll. But what Guralnik noticed happening among participants and private practice patients might surprise you.

“It’s as if everyone went through a crash course in how to decenter yourself from your own certainty in your subjective position. So you can certainly look at your position and say, ‘Well, I feel this way, because let’s say I’m a white, Jewish woman of a certain class,” Guralnik said. “And I’m aware of the fact that someone with a different skin color and a different class position might actually experience things very differently. And that might be true about my spouse. That’s profound. I mean, years of work of my kind of work will not lead to what people have gone through experiencing this past year.”

Though there may be moments that viewers suspect that Guralnik has superpowers, particularly when it comes to patience and self-control, but in reality she is merely a woman who has spent years and years honing her craft, the better to help nudge people towards developing a healthier relationship with their own mind, as well as with their partner. And yet, even as I write that, I can’t help but suspect that behind her empathetic and inquisitive exterior, in reality she understands the secrets of the universe, while also knowing that we, as a people, are in no way prepared to hear them, and so carries her burden alone.

But until such time as I’m proven wrong or humanity finally reaches the level where it can successfully process the meaning of life as we know it, we must settle for advice on how to move forward united, as restrictions lift and vaccines continue to be distributed.

“I think as a collective we’ve matured a lot during the past year. And I worry about a boomerang effect, suddenly going all the way back to polarization and alienation and forgetting these lessons that indeed we do all depend on each other,” Guralnik said. “It might seem to you like you’re doing one thing here and it has no impact on the other side of the globe, but it does. Similarly our relationship to our partner and our relationship to the environment. There’s a lot of good lessons to be had, even when we go back to normal. I just hope that people take this further rather than just regress right back.”