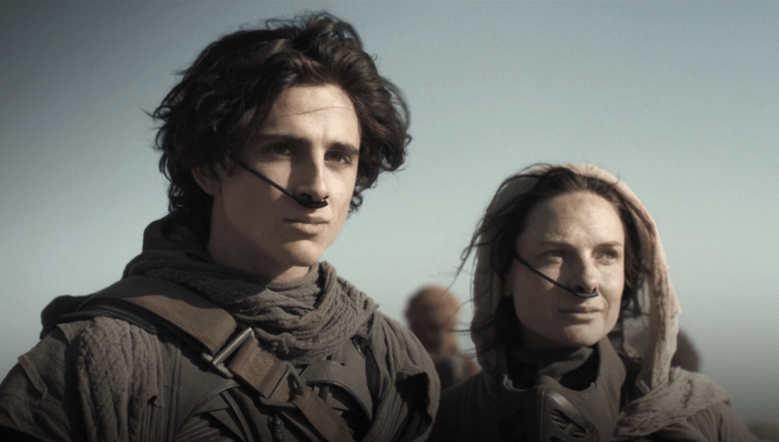 Filmmakers like James L. Brooks (“As Good as it Gets”) and Denis Villeneuve (“Dune”) feel safe when they hang out on the plush red sofas in Hans Zimmer’s Santa Monica studio. The prolific German composer creates an atmosphere that encourages play and experimentation.

“I built something that wasn’t a recording studio,” he told me in our Zoom video (above), “but a work environment where you feel free to go play the wrong note, and a creative spirit reigned. It’s not me and my lonesome. I surround myself with great artists whose work I enjoyed and conversations I loved. Everything we did is more about a conversation and a jointly discovered answer to something. The room was exciting and at the same time a comforting room. We artists are so bloody insecure all the time.”

Zimmer said composing can be a lonely job as he figures out cues, sonic components, and arrangements, but after that “I love to open the conversation up.” He often shares his early scores with the young musicians who work at his compound and asks, “What would you do with it?”

The composer brings in musicians as they emerge from university music schools, often saddled with loan debt. “They come out with formal training, which in every single case prevents them from being effective on a film score,” he said. “Somehow what they learn, and what the craft really is, is different. If you’re an intern making coffee, you’re still in the room hearing a conversation between me and Villeneuve. If you’re good enough and have the balls to open up and give an idea, you will be heard!”

Zimmer spent decades composing studio film scores on tight deadlines, but always creates something bespoke. They range from Nancy Meyers and Penny Marshall comedies to six titles with taskmaster Christopher Nolan, from “Inception” and “Interstellar” to “Dunkirk.” Nolan was unhappy when Zimmer chose to collaborate again with Villeneuve on “Dune” — a frontrunner for many craft Oscars this year — over “Tenet.” What Zimmer loves about working with Villeneuve: “He leads with kindness, and lets you express your most secret ideas.”

Hans Zimmer poses for a portrait during the 87th Academy Awards nominees luncheon.

For Zimmer, the emphasis is always on the word “play.” That was especially crucial on “Dune,” which whisked Zimmer and Villeneuve back to their deep feelings for the Frank Herbert novel. In fact, Zimmer was the first creative that Villeneuve asked to join him on the film. Zimmer never saw the David Lynch movie. “I made my own movie in my own head and didn’t want that vision to get blunted,” he said. Working on “Dune” “transported us back to be 13. Our approach was to find the recklessness and inventiveness that a teenager has.”

Villeneuve kept surprising him. “I didn’t expect that,” Zimmer said of the music that welcomed Paul Atreides and his family to the desert planet of Arrakis. “Denis’ crazy idea when they arrived: they were heralded not by trumpets and a marching band but by bagpipes.”

Villeneuve leaned on Zimmer to express things he hadn’t even considered. “He was obsessed with this idea that the music had to come from another world,” the director told me. “He created instruments, and it took a long time. He was like a mad scientist doing an experiment, creating a library of sound. He created wind instruments with friends. He had read the novel several times and knew all the layers and was one of my strongest allies, because sometimes he knew how to bring the subtext of some scenes, a bit like in the book when you hear the thoughts of the characters.”

The men also agreed that the women are the most powerful force on Planet Arrakis. “It’s not really a film solely about a male hero,” said Zimmer, “The power comes from the women, the mother [Rebecca Ferguson], the Bene Gesserit, the generations that are inlaid in the DNA of it all. Even when Jessica isn’t on screen, you have a sense of her lingering in the background.”

Zimmer also surrounded himself with some extraordinary women singers. “Lisa Gerrard is like my sister,” he said. “We do experiments, we don’t know if it’s going to work. She gave me a gift. Loire Cotler is the big voice with some authority; she tears your eyeballs out. Her singing sounds like it carries for miles across the desert. Her singing in her closet with coats on her head became her studio.”

Inventing the new instruments required a word processor for music. “You type into music, play notes into the Cubase,” said Zimmer. “It’s the main generator of sound in this score.” To create an entirely new sound, Zimmer could use the Cubase to analyze the spectrum of a Tibetan war horn and channel the cello-playing of Lisa Guo.

He also deployed the otherworldly sounds of Chas Smith, a musician/welder/sculptor who creates “an unholy alliance of airplane manufacturers and cast-off metals,” said Zimmer. “His whole house is dedicated to one huge resonating chamber, with shiny metal and pots not quite of these earth. When excited, these metal plates and rods howl and scream and whimper and speak to you.”

Zimmer constantly sent sonic ideas to sound designers Theo Green and Mark Mangini as well as editor Joe Walker to create the movie’s elaborate soundscape. “I don’t know where I start and they end,” said Zimmer. “Joe was a composer. He’s a remarkable editor; he edits the way a composer writes; he has a sense of rhythm. This is a score of a film made by people who loved working together and collaborating.”

Next up: The collaboration continues with “Dune” Part II. Zimmer has already mapped it out. “Of course, I approach this story as a whole,” he said. “In my own head, the structure lasts until full stop on the last page of the book.”