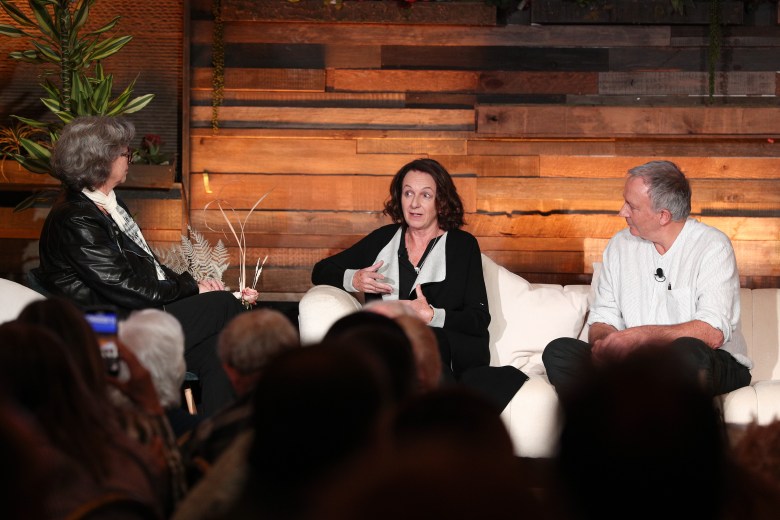 Some films spend years in development hell. Others get off the ground rather quickly. But in the case of “The Elephant Queen,” this ambitious documentary was three decades in the making.

As part of IndieWire’s Consider This FYC Brunch held November 5 at Liaison Hollywood in Los Angeles, directors Mark Deeble and Victoria Stone discussed their new wildlife documentary “The Elephant Queen” for an Apple Originals panel. The film, which is now in theaters and streaming on Apple TV+ as part of Apple’s inaugural wave of original film and television programming, takes you on the odyssey of a majestic mother elephant as she leads her family across the African landscape.

“When we started, our ambition was to make a film that would inspire the world to fall in love with elephants,” Deeble told audiences at the IndieWire panel.

Stone said, “One of the reasons we chose to work with elephants and to take on a film like this was because we knew it’s very hard not to be around elephants, and look at them and feel, ‘They are just like us.’ Knowing that there are basically more elephants dying than being born… we wanted to inspire the world to fall in love with elephants, and then around the film we have all sorts of ways in which we are making a difference for elephants on the ground.”

Deeble and Stone spent 25 years living in the East African bush in advance of this documentary, whose elephant protagonist is Athena — and as the filmmakers revealed at the IndieWire FYC Brunch, Athena wasn’t easy to find.

“We were literally sharing water holes with poachers. We found the elephants to be incredibly nervous, and it became an untenable situation,” Stone said of the 18-month journey it took to discover Athena, who went on a journey to flee the approaching dry season. “We had to literally move into the park, and we kept on looking and looking, and a year and a half after we started, we didn’t find her — she found us.”

“You don’t want to be between a female elephant with huge tusks and her calf in case something goes wrong,” Deeble said of approaching Athena and her herd, which eventually allowed the filmmakers into their midst after some hesitation. “We had unparalleled access to the herd. It was like she’d set us a test, and we’d somehow passed the test… We essentially became one of the herd.”

One of the married-couple filmmakers’ clever inventions during production was the creation of a metal box they submerged beneath the earth to capture ground-level shots of sea turtles and other low-dwelling land animals that occupy the elephants’ world. Stone had to stay inside the box from dusk until dawn, which made for a “slow roast,” as his wife Deeble described it. “I discovered that if you do it for 30 days, you actually cause a little bit of brain damage,” she said.

“I had to drink in the box, and do all the other bits that happen after 12 hours. I was happy enough, I thought, I could survive 30 days,” Stone said. “After two or three days, the clouds disappeared, the sun came out, and it was terrible.”

Despite the decades of preparation for the film, Deeble said, “We actually don’t have too much footage, because we had to try and do it as economically as possible. We were used to shooting on film” — “The Elephant Queen” was shot digitally — “so that stayed with us, and is very helpful.”

Deeble and Stone shaped all of that footage into a film that is not your typical wildlife doc, as it’s stitched and edited like a narrative feature, with the elephants as the main characters. The film originally premiered at the 2018 Toronto International Film Festival, followed by Sundance in 2019. The movie is narrated by Academy Award nominee Chiwetel Ejiofor. Right now, IndieWire’s Anne Thompson has the film among the frontrunners for the forthcoming Best Documentary Feature Academy Award shortlist.

This Article is related to: Film and tagged Direct, fyc awards brunch, The Elephant Queen