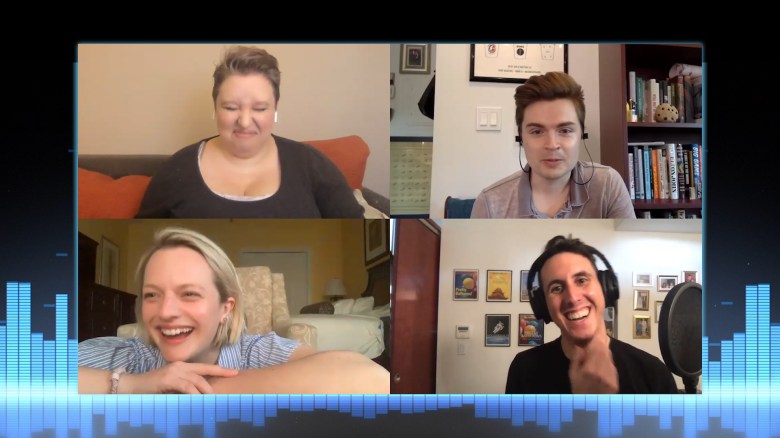 When you’re interviewing celebrities there are a lot of ways things can go. Some stars are all business, only concerned with hitting their talking points and getting in and out as quickly and cleanly as possible. Others clearly utilize their inherent charm and gilded tongue to compose eloquent answers that, upon later review, say absolutely nothing. With still other interviewees it becomes very apparent that they’re only as well-spoken as the scripts they memorize, making for stilted, excruciating experiences for everyone.

And then there’s Elisabeth Moss, whose recent appearance on IndieWire’s TV podcast Millions of Screens left the hosts convinced she was either one of the most gregarious and open actresses in the industry or one of the best actresses of her generation, and most likely, both.

Star of Hulu’s “The Handmaid’s Tale” and Josephine Decker’s latest film “Shirley,” Moss spoke with ease on a variety of subjects, including the halted production of “Handmaid’s” fourth season, due to coronavirus concerns, as well as how she interprets June’s path moving forward, how long audiences would believe in June’s ability to survive, and how she handled the decisions that pit Moss, the Executive Producer, against Moss, the Actress.

Plus, she shared her excitement at getting behind the camera for Season 4, something that felt like a natural extension of her involvement at every level of the series, adding that some of her shots were included in the teaser trailer from last month announcing the show would return in 2021.

The Emmy-winner also offered insight into her time working on Wes Anderson’s upcoming release, “The French Dispatch.” Moss was delighted with the experience, saying that working on an Anderson film felt like living inside an Anderson film, inadvertently pitching the greatest “Inception” remake of all time.

But it wasn’t just the work that Moss was willing to go deep on. Upon learning that TV Deputy Editor and Millions of Screens co-host Ben Travers was as fervent a Chicago Cubs fan as she was, Moss and Travers explored the possibility of a 60-game baseball season, as well as the team’s prospects should it come to fruition. Plus, the actress shared her own star-struck moment on the set of “The French Dispatch” when she talked baseball with one of the most legendary Cubs’ fans of all time.

This is all, believe it or not, just the tip of the interview iceberg with Moss, so much so that we’ve released our first-ever bonus episode of Millions of Screens just to make the most of the brilliance therein. Plus, it all happened on video. Check out the entire Moss interview in the video above, in which Moss joins Travers, TV Awards Editor Libby Hill, and Creative Producer Leo Garcia to talk all things, everything, but especially her impeccable taste in TV and film.