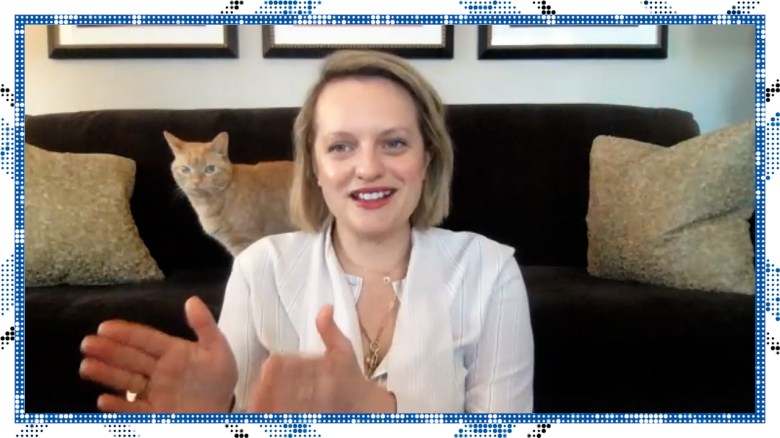 [Editor’s Note: The article contains spoilers for Season 4 of “The Handmaid’s Tale.”]

Apparently, Elisabeth Moss decided that she didn’t have enough on her plate when it came to “The Handmaid’s Tale.”

Moss, who stars as June Osborn in the Hulu adaptation of Margaret Atwood’s dystopian novel of the same name, had always treated the series as a two-hander. She served as both the lead actress and central figure within the show’s universe, as well as an active executive producer, involved in many if not most of the decisions being made on the series. The actress has won an Emmy for each of those titles; in 2017 she took home the award for Outstanding Actress in a Drama Series, while the show won Outstanding Drama Series.

And now, with “The Handmaid’s Tale” in its fourth season, Moss has added director to her already impressive resumé.

“It was honestly the most fulfilling thing creatively I’ve ever done. I never really had a grand plan to to become a director or anything,” Moss said in a recent interview with IndieWire. “What I wanted to do was [direct] on this show, because I’m so knowledgeable about the show and I wanted to take that a step further. I felt like I could do it. And then I just ended up really, really loving it.”

Stranger than coming to love directing is which aspect of the task Moss really took a shine to. For Moss, taking over the helm on “The Handmaid’s Tale” meant entering into an arena where both actors and producers should never tread: Giving notes to other actors.

“All of a sudden, I had to go up to actors like Ann Dowd and Bradley Whitford and give them an a note. And I mean, Brad — I worked with since I was 17. I’ve worked with him for over 20 years and I’ve known him for over 20 years. And I remember having to go give him a note for the first time on Episode 3 and just being so nervous,” Moss said. “And that ended up being my favorite part of the experience, just the opportunity to work with these incredible actors the opportunity to say something to them or give them an idea. And then you go back and you sit in the monitor or you’re in the scene with them and you see what they do with it. It was just it was like magic. Like magic!”

“And then after that, I felt like I was just getting the hang of it by the end of Episode 3. So we needed a director for Episodes 8 and 9 and I said, ‘God would it be weird if I threw my hat in?’ And I was just like, you know what, I’m just gonna do it and I did and they embraced it.”

While hearing Moss talk about her experiences directing Whitford was fascinating — and surely invigorating for faithful fans of “The West Wing” — I was still curious to hear specifics about working with Dowd in a directorial capacity. Dowd, of course plays Aunt Lydia, one of June’s primary adversaries throughout the series, and Moss has previously spoken at length about playing opposite “The Leftovers” star.

“In Episode 3, we were all coming back from a period of not working for six months. And for somebody like Ann Dowd that doesn’t happen. Ann Dowd is working constantly. So there was a certain energy when she came back for Episode 3 that was palpable. You could feel it all bubbling under her,” Moss said. “I think she was more alive than she’s ever been. And it was my job just to harness that. It was my job just to kind of direct that and just point it in the right direction. We’ve been close friends for a while and we developed an even deeper relationship. Working together as actor and director was the strangest thing and we just became very, very, very close. The fact that she trusted me, it’s something I would go home at night. I would just be like, ‘I can’t believe Ann Dowd trusted me today.'”

Of course, with Moss investing so much time and energy on her new endeavor it’s easy to forget that she’s still serving as the foundation of one of TV’s prestige dramas and on “The Handmaid’s Tale,” events have finally turned a new and distinctive corner.

Samira Wiley and Elisabeth Moss in “The Handmaid’s Tale”

At the conclusion of the fifth episode of Season 4, Moira (Samira Wiley) discovers June in the rubble of a recently bombed Chicago, then smuggling her long-lost (concussed) friend onto a ship bound for Canada and home. It’s a moment fans of the series have been waiting years for, after several previous opportunities in which June could have fled Gilead, only to stay in the hopes of liberating her captive daughter Hannah.

With her successful arrival in Canada, June suddenly finds herself thrust into what the rest of us identify as everyday life and she, after some seven years in Gilead, finds it wholly overwhelming. June has been irrevocably changed by her captivity and torture and reintegration into society seems like a task that might just be insurmountable.

More than anything, though, June is angry and the series goes to great lengths to provide the character room to feel her fury. But how was it to live inside that anger for Moss?

“It’s so fun. So fun,” Moss said. “In life so often, especially as women, we’re not allowed — or it’s not thought best for us — to be too angry or too vocal about our anger. And so getting the opportunity to, at the end of Episode 7, scream in Serena’s (Yvonne Strahovski) face, I was screaming for all of us, you know what I mean? I’m screaming for all of us, every woman who has ever wanted to just really give it to somebody. The testimony in Episode 8, that’s for all the men and women who have ever felt like they didn’t have a voice or didn’t have a place to say, ‘There is injustice in this world.'”

“And it’s such a cathartic thing as an actor to be able to have these moments. I mean, I’m a pretty vocal person in real life but even so, there is a societal idea of how you’re supposed to behave. You’re not supposed to go scream in people’s faces and but it sure feels good when you can do so as an actor.”

Elisabeth Moss and Yvonne Strahovski in “The Handmaid’s Tale”

The testament of which Moss references is a seven-minute monologue June delivers in Episode 8, while testifying against Fred (Joseph Fiennes) and Serena Waterford, detailing the abuse she suffered at their hands, revisiting (in excruciating detail) her inhumane treatment in a way that crystallizes it for an audience that might have forgotten the extent of the brutality in the seasons since.

What’s interesting about the moment is that Moss is the person directing it. And she chooses to do so in an uninterrupted take in which all we ever see is June. The degree of difficulty is astounding, as with no cutting, there’s no way to allow for multiple takes cobbled together. So why do it? Why set such a high bar?

“I had coverage of everyone else in the room for that speech,” she said. “Quite honestly, I remember saying this to Stuart [Biddlecombe], my DP, I was like, ‘I don’t know if the actor can pull it off.’ Do you know what I mean? And it’s no insult to the actor, But this is a seven minute speech. I don’t know if this is interesting enough to watch for seven minutes. And I’m not going to know until we do it and then we we watch it.”

It’s June’s anger that provides the most intriguing question moving forward: What now? If June can’t return to polite society then what happens to her? Because at this juncture there’s no evidence to suggest that her anger has any way to be sated.

“But I think for her, Episodes 9 and 10 specifically, it’s about a choice,” Moss said. “Which way is she going to go?”