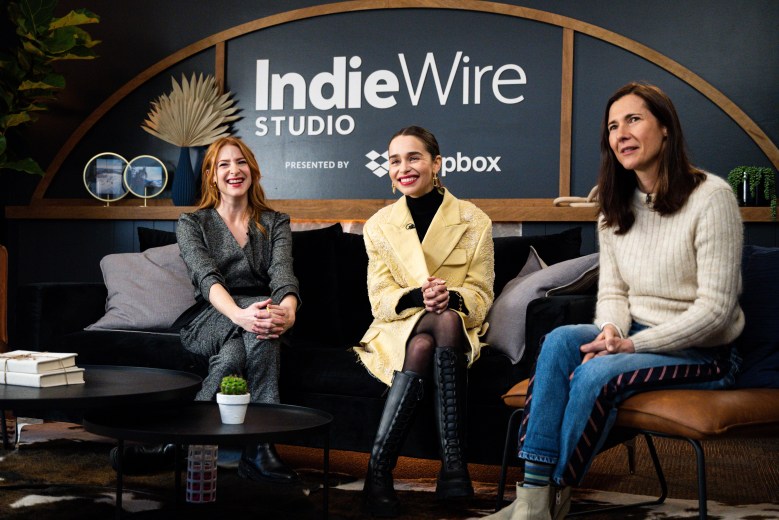 One of the most unique films at Sundance this year is “The Pod Generation,” a slightly dystopian story about a 22nd century where humanity has become so dependent on technology that even something as intimate as childbirth has been outsourced to sleek devices known as “pods.”

As technology continues to advance at a faster pace than we can process, it’s not particularly difficult to imagine something similar happening in the real world. So the film’s director Sophie Barthes and stars Emilia Clarke and Rosalie Craig stopped by the IndieWire Studio at Sundance, presented by Dropbox, to explain why they hope humans don’t prioritize technology over our own happiness.

“It’s technological progress for progress’ sake. We do it because we can. It goes towards the commodification of our mental, physical, emotional, spiritual world. This kind of ‘we must keep moving forward, we must keep bettering ourselves, there is no end,” Clarke said of the parallels between our world and the film. “It’s this addictive necessity that speaks to how we’re living our lives as a society as a whole.”

Clarke continued: “Technology isn’t all bad. There are medical advancements that are making things better for people. I just think it needs to be checked.”

“The Pod Generation” exists at an intersection of genre filmmaking and social commentary that Clarke hopes to remain in for quite some time. The actress explained that after years of working on big franchises like “Game of Thrones” and “Star Wars,” her primary interest is now making independent films with unique creative visions.

“The thing that I want most for the rest of my career is to work with as many auteurs and filmmakers in the independent film space and be as creatively fulfilled as I possibly can be. And I’ve had access to some incredible experiences and been able to work with some astonishing people,” she said. “I absolutely adore high concept ideas and material. That’s the stuff I really enjoy reading as well, kind of magical realism. I think that’s where the joy and of storytelling comes into its own. When you are able to give someone a world that is not our own to explore incredibly big philosophical ideas. To do as many of those as I possibly can moving forward would be excellent.”

Does Clarke’s interest in doing more genre films extend back to a galaxy far, far away? When asked if she was angling to reprise her role as Qi’ra from “Solo: A Star Wars Story,” Clarke denied that anything is being planned. Though she made it clear that she can occasionally have as much fun on a massive blockbuster as she can on a small indie film.

“I mean… no,” she said with a laugh. “That would be lovely, that would be very nice. I’m genuinely having a wicked time on Marvel, though, they’re absolutely brilliant.”

“The Pod Generation” premiered at the 2023 Sundance Film Festival. It is currently seeking distribution.

This Article is related to: Film and tagged Sundance 2023, Sundance Studio 2023, The Pod Generation