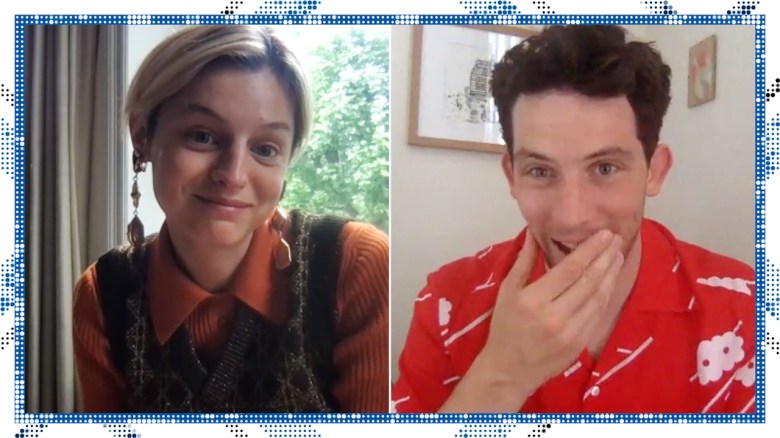 There is something truly special when two co-stars, brought together by happenstance, develop a bond that clearly transcends that which the audience sees onscreen. On paper, Netflix’s “The Crown” had a near impossible task in casting a young Diana Spencer, finding an actress who could carry with her the mystery, the savvy, and the purity of emotion that spurred such affection in masses around the world. And yet, in relative unknown Emma Corrin, they found just that.

But maybe even more impressive than finding Corrin is how well the actress worked with Josh O’Connor, the actor who had first portrayed the often controversial Prince Charles in Season 3. O’Connor had been tasked with one of the most thankless jobs since the series started, as a man trapped by his birthright, unable to follow his heart, only to end up unhappily married to one of the most beloved women in the world.

Audiences think they understood all the difficult dynamics in play between the couple thanks to years of rabid and invasive press coverage, but in the hands of Corrin and O’Connor, both Diana and Charles found new life. The latter is more than just a pampered and cruel weakling, but a victim of an unforgiving system, another helpless cog in the greater monarchy machine. The former is troubled, but trying, isolated by that same system, and working at every turn to have the happy ending which seemed so feasible as a young woman — while slowly growing more disillusioned.

Despite all that baggage, as individuals wholly outside of the roles that they play, Corrin and O’Connor appear thick as thieves, making any conversation with them a singular delight, as proven in a recent interview with IndieWire. While the entirety of the chat can be seen in the video above, here are just a few magical tidbits the pair shared from their experiences on set filming some of the most intense scenes of Season 4.

Emma Corrin and Josh O’Connor in “The Crown”

The Prince and the Wood Nymph

“I just remember them putting me in this absurd costume and then realizing that this was the first time anyone would see me in the show. After the months of hype and paparazzi following me around and all this, ‘Oh my god, [Diana’s] outfits,’ they would see me as a tree,” Corrin said of the series’ depiction of a first fateful meeting between Diana and Charles, during which the former was in costume as a wood nymph for “A Midsummer Night’s Dream.”

“I love that scene, though,” O’Connor said. “I remember [director Benjamin Caron’s] references were like Baz Luhrmann’s ‘Romeo and Juliet,’ wasn’t it? Like looking through the fish bowl thing?”

The Prince of Flies

“That was one of the greatest moments I had on ‘The Crown.’ It was really special because it was one of our first big scenes. It’s a beautifully written scene and we shot it almost entirely in one sequence,” O’Connor said of the pair’s epic fight that takes place during a high-pressure overseas tour for the royal couple. “I just loved it. I loved doing that scene.”

“They purposely built this amazing ranch in the middle of the desert,” Corrin said, before ominously adding, “but the thing I remember from that is the flies.”

“I got kind of screwed, basically,” he said. “They shot Emma’s coverage, unbelievably brilliant, went really well. When they turned around on me, the flies descended. It was like 4:30 p.m., whatever, and honestly, I could not do a single take without a fly going into my eyeball — and, like, big flies — or in my mouth.”

“It was funny for the first, like, couple of takes. And then we did a lot of takes and it was still happening,” Corrin said. “The worst thing was we’d get three-quarters of the way through the scene, and I’d see a fly land on the side of Josh’s nose and I just had to sit there. We’d both know it was there. And it was just awful.”

“But you did so well!” she said to her besieged scene partner.

Josh O’Connor and Emma Corrin in “The Crown”

“I remember I had a nosebleed and a panic attack filming that,” Corrin said of the mind-blowing scene that had Diana performing “All I Ask of You” from the musical “The Phantom of the Opera” just for Charles.

“I think the nosebleed was because of the panic attack,” she said. “It was fine.”

“It was quite hard because obviously, I’d actually heard murmurings or like people going, ‘Oh my god, what Emma’s done with ‘Phantom of the Opera’ is amazing’ and everyone’s like ‘So great. So beautiful,'” O’Connor said of the buzz around set over Emma’s performance. “So I was like, ‘Well, I don’t think I should see it until I see it for real.’ But actually, that was a terrible mistake. Because Josh seeing Emma do ‘Phantom of the Opera,’ obviously, my reaction was like ‘She’s amazing!’ but Charles is meant to be horrified, and so my first take was rubbish. My first reaction was just in awe of Emma.”

“[It was] scary because they had the real set, the real people on the stage who were actually from ‘Phantom of the Opera,’ and the guy conducting it in the orchestra was the real one from the actual musical. And the speed at which I’d learnt it was different than the speed that he does it,” Corrin said of the filming process for the song. “I had a little earwig in my ear and he was conducting via a different screen, so I could never do it right. He was very sweet, but I think just had done it a certain way for a long time. I was just flying by the seat of my pants. It was so, so intense. And I think I just had massive stage fright. It’s the only time I’ve had that.”