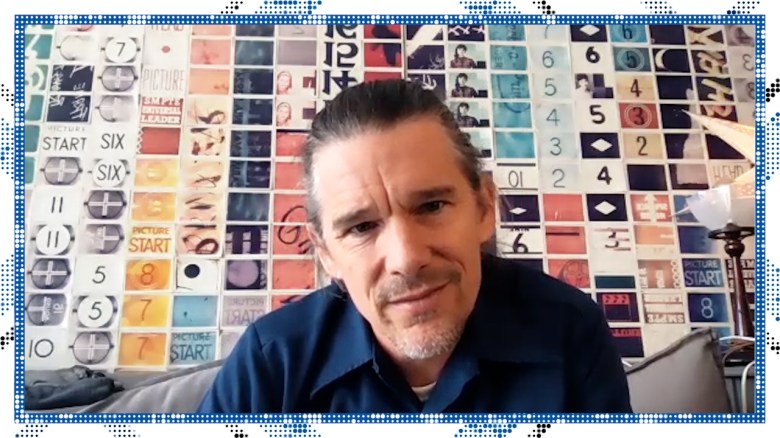 “What a beautiful country.”

In “The Good Lord Bird,” these are the first words we hear from John Brown (played with a spiritual fever by Ethan Hawke) as well as the last words he ever says. Even before embarking on Showtime’s rabble-rousing seven-part limited series, it’s comes across as a peculiar remark. For one, anyone who’s cracked a history book should know John Brown was an abolitionist, who spent much of his life fighting his country’s contemptible practice of slavery.

For another, when Brown first says these words, he’s about to be hung for treason.

These words come to frame the story of a fiery fight-picker packing 14 pistols, who’s described as a “peacenik’ by the man who plays him and who describes himself as a man of God. John Brown will spend his mornings in conversation with a rabbit and his evenings stretching out a prayer of thanks until dinner has gone stone cold. But he’s also a man who vows that anyone “who stands against me will eat lead grape and powder,” before following through on that promise, even if a blade is all he has on hand. The John Brown who commands every frame of “The Good Lord Bird” is a walking contradiction, and yet he never strays from the righteous path he’s set for himself.

“That’s somehow the Zen koan of John Brown. It kind of breaks your brain,” Hawke said. “As a genuine peacenik myself, to really look at [that moment] when it’s too much, when, you know, ‘I’ve come so far, I’m not taking anymore,’ when you pitch your tent and fight — I don’t know. I found that line very moving.”

That Hawke was able to channel all of these conflicting notions into a living, breathing, constantly shouting human being is a feat unto itself. The actor, who also served as co-creator, executive producer, and co-writer on the limited series, credits his near-total immersion in John Brown’s history for being able to find a convincing version of the character — and it is just one version.

Onion (real name Henry Shackleford) is a young man (played by Joshua Caleb Johnson) who John Brown “frees” in a shootout that kills Onion’s father. In all the hubbub, John Brown not only drags the boy out with him, effectively kidnapping Henry, but he becomes convinced his name is Onion, and that he is actually a she. Given the show is narrated by Henry, Hawke gave himself license to push John Brown to perceptible extremes.

“As a kid, any time I met older people who were religious or with powerful convictions, it always felt like they were yelling at me,” Hawke said. “So I thought, ‘Well, I guess that’s how Onion feels.'”

But beyond that aspect of Brown’s identity, Hawke knew he was playing the John Brown as depicted in James McBride’s novel. The book, which first published in 2013, captures a tricky tone that’s able to find outrageous comedy amid very serious subject matter. As Hawke said, it makes you question what you’re reading, and ask, “‘Wait, am I allowed to laugh at this?’ It’s like John Brown being told to you like Redd Foxx or Chris Rock or Richard Pryor.”

“I became deeply immersed in the tone of the show, and it really helped me as a performer,” Brown said. “When you come to set, both humor and emotion are allowed to be at a very high level. It’s like walking right up to the line of farce — but if you go too far in the comic [direction], then the emotion goes out, and if you go too far in emotional [direction], it can become kind of preachy, or do-gooder-y, or feel like it has an agenda with the audience. There’s something beautiful about McBride’s writing where it feels like he’s both in love with John Brown and making fun of him constantly.”

Still, one of the more exciting aspects of Hawke’s electric performance isn’t what we get to see, but when we get to see it. Over the past five years, if not longer, describing a man like John Brown — a gospel-spewing, gun-toting white guy hellbent on starting a war over what he sees as a crime against God — would inevitably lead the listener to think, “What right-wing nutjob is this?” But instead, Brown is fighting for equality. He’s trying to end slavery. He’s a progressive, just not the type of progressive we’re used to seeing onscreen.

“There’s something about the quintessential liberal point of view, the hippie point of view, the ‘we all should just love each other’ point of view that often gets bullied and pushed around, or is made to feel small or made to feel weak — and it’s the decisive people of the world, the strident people, who make history,” Hawke said. “For some weird turn of nature, John Brown appears, who’s talking about the unwavering equality of mankind, but will not back down from a fight about it.”

Hawke said Brown reminded him of the left-wing heroes he looked up to as a kid, like Johnny Cash, Kris Kristofferson, and his grandfather.

“These white American males who were willing to pitch a fight about equality and what democracy means, and they weren’t willing to let the symbol of the flag simply stand for nationalism and simply stand for white people,” he said. “They had it represent something bigger than that and more inclusive than that. And slowly, over the course of my lifetime, you saw that Southern white American voice get drowned out by a different voice.”

“John Brown is just unquantifiable,” Hawke said. “He was […] along the same lines as when Martin Luther King Jr. said, ‘I prefer the racists than silence of complicity, because the racists I can fight, I can talk to, I can argue with, I can change their minds, but if you don’t speak, if you just silently go along with systemic racism, there’s no way to work with that. So John Brown, on one level he’s a peacenik, and on the other level he’s carrying 14 pistols. On one level, he’s waging war on the South, but he’s really angry at the North. So he doesn’t fit with any knee-jerk point of view.”

“What a beautiful country.”

These are the first words we hear from John Brown, as well as the last words he ever says — on the show, that is. Despite falling in love with the quote, Hawke found out during his extensive studies that there’s no evidence those were his last words. There’s no telling what his last words were, since no one present took them down.

“So, to me, [that quote] represents what we’re fighting for,” Hawke said. “Whether we’re talking about the Earth — the Blue Ridge Mountains, the Red Woods, the deserts — or we’re talking about the ideal of democracy, regardless, it’s worth fighting for. To pitch the fight not in anger, but to pitch it in love. As a person who spent a couple years of their life reading a lot about John Brown and reading his letters, reading what other people said about him, you feel someone fighting hard and violently but with love.”

Thanks to “The Good Lord Bird,” a whole new generation of Americans can feel it, too.