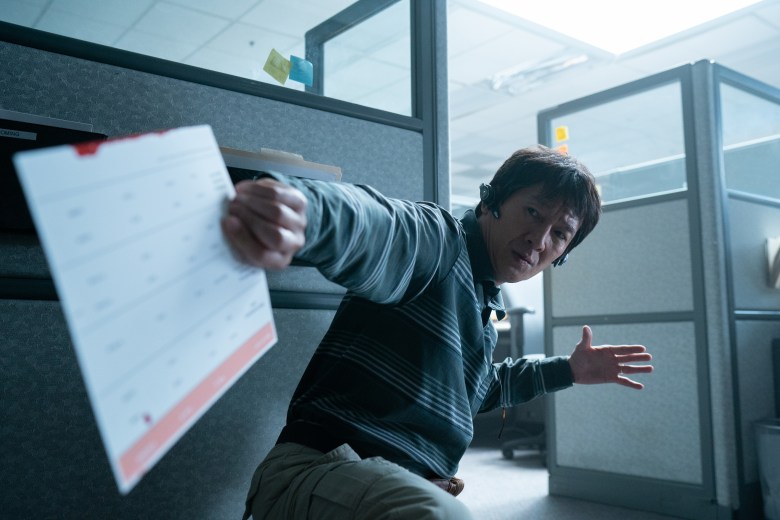 To say there’s a lot going on “Everything Everywhere All At Once” is an understatement, as the film deliberately runs pell-mell through infinite realities to find the version of Evelyn Wang (Michelle Yeoh) so down on her rotten luck she might just be able to save the world(s). But some of the movie’s noise is also, sneakily, signal. On the latest episode of Filmmaker Toolkit, “Everything Everywhere” directors Daniel Kwan and Daniel Scheinert — known collectively as Daniels — discussed the ways they support the films’ visual excesses by teaching the audience to emotionally navigate through them with sound.

Even on the very first timeline of the edit of “Everything Everywhere All At Once,” Kwan and Scheinert said they had 30 audio tracks, and they use key, trackable sounds to signal everything from the jumps between universes to the power of The Bagel that could end existence as we know it. The build up of sound over the course of the initial sequences then allows them to put it to more complex, emotional ends, in the shuffling gravel noises that work as affecting dialogue in the Rock Universe, or the action SFX that accompanies Evelyn’s fight up the staircase to reach her daughter Joy/destroyer of worlds Jobu (Stephanie Hsu).

“I love to use sound design as like little slides, like little ways [that gets] you from one plateau to the next without you realizing it or without it feeling unnatural. So there’s a lot of transitional sound effects that will take an edit that would’ve been jarring, but makes it feel natural and intentional,” Kwan said. “If you go back and watch the film, there’s a lot of swells, and there’s moments when we really wanted to bang the audience out of their comfort zone.”

Listen to the entire discussion below or read on for excerpts from the conversation — and check out the IndieWire Craft team’s roundup of Best Film Sound of 2022 here.

To hear this and more conversations with your favorite TV and film creators, subscribe to the Toolkit podcast via Apple Podcasts, Pocket Casts, Spotify, or Overcast.

This roller coaster with high arches and then sudden, sharp turns is how the initial audit sequence works, as you can see in the video above. The abrasive buzz of the IRS office noise gives way, once Evelyn completes the tasks she needs in order to jump universes for the first time, to a crackling of glass and the sound of a flash, as visually and sonically her world breaks down and she’s shunted somewhere else. We only need to see that in its entirety once (although “Everything Everywhere” does take great joy in finding different ways to yank Evelyn between all the varied versions of herself) to get the concept. After that, just the sound gives us what we need to know to track what’s happening.

“The moment when she does something strange and finds a jumping pad to another universe, I wanted it to sound futuristic, but something old at the same time. You throw that in, it builds up anticipation. It’s familiar even if you don’t know what it’s from,” Kwan said. “We went through so many sounds,” Scheinert added.

They finally landed on the charging sound of a disposable camera flash bulb. “That [felt right]. It gives you the sense memory. It’s familiar even if you don’t know what it’s from,” Scheinert said. “I think you get a lot of bang for your buck by doing that because the audience gets to fill it in. They get to understand the lived experience of that sound is very different than what the literal sound is going to be,” Kwan said.

“Everything Everywhere All at Once”

In a lot of ways, the heart of “Everything Everywhere All At Once” is found by filling in that difference between what’s literally happening and the characters’ relatable, lived experience — the audience sees both the heightened absurdity of the visual comedy (shout-out to a legend, Raccacoonie) and the emotional reality that Evelyn is trying to navigate. The incredible visual gags and incongruous power-ups that make Evelyn, and the forces trying to stop her, set the table; but it’s often through sound that we get the context we need for what all this chaos means on a human level for this married couple (Yeoh and Ke Huy Quan) and their daughter.

As the film crescendos and the fate of all possible universes is decided, the Daniels are able to push sound even further, imbuing emotional ideas with the power and the thrill of a martial-arts fight. “In the fight where [Evelyn] breaks down [her opponents] by understanding them, even little things like her looking at someone and thinking about them, I wanted to add, like, punching whooshing sounds that you would normally have in an action film, but to her eyes,” Kwan said.

“Her eye, just looking from left to right, I would add little things like that and [try] to turn even the act of looking and seeing someone into a fun, dopamine-hitting action moment, you know?” Kwan said. “I have very heightened tastes with sound design and Scheinert is a little bit more about the grounded stuff, but we find a way to know tonally what each scene needs.”