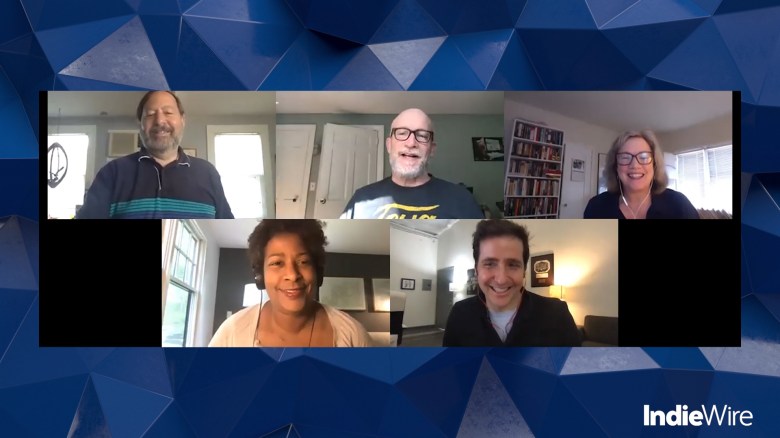 While Hollywood has remained in lockdown, non-fiction filmmakers have continued getting things done with a smaller footprint. Check out our live webinar, above, to learn how documentary producers, directors and sellers are getting past the multiple impediments to getting their films to market.

IndieWire brought together a panel of industry players to share their adaptations to shutdown, from how to make Zoom interviews look good, sharing data remotely, and grilling a live subject safely to a slowed-down post-production schedule.

Submarine Entertainment’s Josh Braun, who with his brother Dan not only sells distribution rights for movies such as Laura Poitras’ Oscar winner “Citizenfour,” but also produces such non-fiction as Emmy-winning Netflix series “Wild Wild Country,” had to restructure one project that was about to start, but found a million ways to be productive during the shutdown, focusing more on archive research, lining up crew deals, and production prep, as well as post-production on other films and sales efforts. “If this was a follow-over-the-shoulder project we could not have done it,” said Braun.

The panelists found editing to be often more laborious and time consuming as they learned new technology like Trello, either sending data files to home editing bays via Dropbox or shipping a hard drive, and discussing edits on Zoom. And sound mixing, especially Surround Sound, is still something best finalized in a real space.

Multi-hyphenate Oscar-winner Alex Gibney (“Taxi to the Dark Side”) continued juggling many productions at various stages at Jigsaw Productions, including Showtime Documentary’s upcoming “The House of Saud” (2020) his fourth collaboration with writer Lawrence Wright, without having to shut anything down.

Remarkably, he’s executive-producing a COVID-19 frontlines documentary with director Matt Heineman, winner of the International Documentary Association’s Courage Under Fire award for “Cartel Land.” He and his crews are shooting (with “essential” journalist credentials) at New York hospitals with Canon Mark 15 digital cameras, wearing N95 masks, ski goggles and protective gear similar to the frontline responders they’re filming. “So far nobody has gotten sick,” said Gibney. “The footage is extraordinary.”

Interviews were still possible during lockdown via Zoom, as well as sending SLR cameras and ring lights to grab high-quality footage of subjects in their homes, or doing in-person interviews at a safe distance. Braun is planning to shoot a pick-up shot of a subject through a plexiglass shield through a back door.

Filmmaker Dawn Porter (“Gideon’s Army”) was in the middle of shooting a movie about White House photographer Pete Souza (Focus Features, 2020) when the shutdown hit. Her cinematographer Clair Popkin (“Free Solo”) sent him a plug-and-play Blackmagic Kit and Porter conducted the interviews over Zoom. She not only saved money on her travel budget, she said, but nabbed more time with her subject.

The panel agreed that more flexible work and family time as well as less travel will mark a permanent change in the future. “We may take a more expansive approach to life rhythms and how people work,” said Gibney. “Why be so rigid?”

And many of their routine innovations, like Zoom meetings and interviews, will become permanent. “The convenience of it is not lost on anyone,” said Braun.

Porter also had to finalize delivery of “John Lewis: Good Trouble” (July 3, CNN Films/Magnolia Pictures). In order to take care of the 80-year-old congressman, who is fighting pancreatic cancer, she hired a Zoom producer to create a special interview with Oprah to promote the movie.

Cinema Eye Honors founder and Field of Vision producer AJ Schnack (“Kurt Cobain: About a Son”) managed to complete the 30 for 30 baseball documentary “Long Gone Summer” (ESPN), even though he lost his editor to the birth of a baby.

All the panelists had films scheduled for festivals, and recognized that while they missed the launch publicity, networking and sharing their films with live audiences, they have smart distributors who will find a way to take their films to audiences. Losing festivals is a much more dramatic loss for the emerging filmmakers of this year, who will need a boost going forward. “We have not had time to grapple with the effects,” said Porter.

And due to the lockdown and its economic fallout, many of the structures supporting nonfiction, from film festivals to funding sources, are falling away.

The recent Black Lives Matter protests could spur a new spate of films going forward. “It’s evidence of the power of the medium,” said Gibney. “The images that gave rise to these protests were filmed on little cameras. If they weren’t filmed, there wouldn’t be the size of the protests that’s there are now. The idea that the technology is available for people to point their cameras to uncover moments of outrage that changed the world, that’s a powerful inspiration for us at this moment.”

Added Porter, “This is an opportunity for new voices to emerge and give their take on what’s happening. And they may have access to different communities impacted in different ways. One thing about documentarians, we are a resourceful scrappy bunch. We can pivot quickly.”

While the filmmakers were hoping that demand from streamers would rise over this period, they haven’t yet seen any signs of increased interest. That may come later, when there are real start dates for filming projects again. “It’s not the the worst of times, it’s not the best of times,” said Braun.

The panel marks the latest virtual event in IndieWire’s ongoing live events, which include weekly Instagram live sessions, concerts, and a new video edition of the Screen Talk podcast.