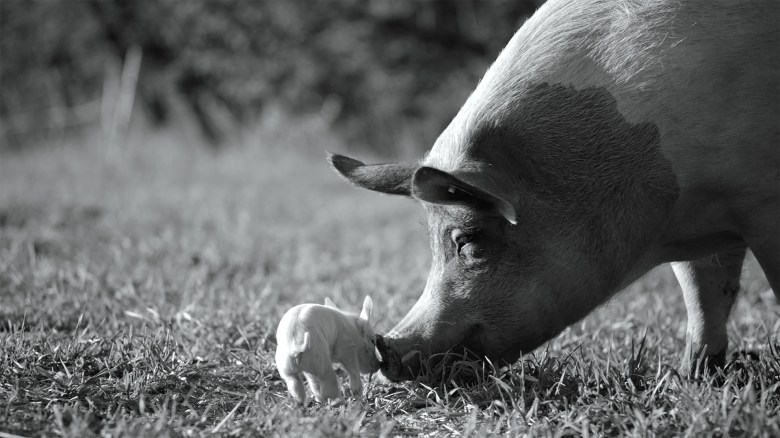 No stranger to unique subject matter affecting the world at large, Russian documentarian Viktor Kossakovsky went from a project about water, “Aquarela,” to his latest one about a charismatic pig, “Gunda.” Although the idea for a film about farm animals had been percolating in his mind for over 20 years, it took him a long time to convince people these non-verbal subjects would make for an interesting story.

While making “Aquarela” and becoming aware of the challenges facing humanity, such as the fact that over one billion in the world don’t have access to clean water, he questioned our relationship to the environment. One key point being the resources utilized to produce meat, from the deforestation that feeding the animals entails to transportation. He believes the pandemic is directly related to humans’ “arrogant behavior towards nature.”

Eventually, in his pursuit to make a movie without a human, Norwegian producer Anita Rehoff Larsen came on board. Originally they calculated it would take them between four and six months of research trips before they could find the right animals for the documentary. Shockingly for the producer, Kossakovsky found exactly what he was after in the first farm they visited.

“We just arrived, opened the door, and the first pig we saw was Gunda and I said to the producer, ‘It was obvious that she was communicating with me.’ She was definitely looking at me in such a way that I could read her emotions. I said to the producer, ‘She’s Meryl Streep. We found her. We don’t need to search anymore,” he said. And while Rehoff Larsen suggested they take the time to look at more animals, he was convinced Gunda was his porcine star.

On the one hand, the director considers this the easiest film he’s ever made, since the footage they shot was only six hours in total. However, on a philosophical and emotional level, the experience was singularly rewarding for him and his team because they were rethinking their understanding of animals.

Kossakovsky wanted to stay away from the cruelty that films with the same intent usually focus on, such as slaughterhouses or the terrible living conditions in some farms. He believes those films didn’t change minds or hearts, and took a different approach highlighting the personalities of his protagonists. Besides Gunda, a one-legged chicken and a group of cows also grace the screen of this black-and-white vision.

“I said, ‘We will do the opposite, we will do a revolution of empathy. We will say, ‘Let’s look at them how they are. Not how we behave with them, but how they are. This is why we didn’t even use music. Of course, when you have such an ending you can put a violin there and cello and people will cry. But we said, ‘No. We don’t push. We are not doing a vegan propaganda film. We just let people watch,” he noted.

“In a way documentary cinema is the closest to our animal nature,” he said. “This is why I said, ‘Let’s go back to original cinema where you just watch and you will feel something you didn’t feel before. This is why cinema exists, especially documentary, not to tell a story, to show you something, to show you something you didn’t see yourself, or you don’t want to see, or you decided not to see.”

To his surprise, his narrative choices resonated with famous vegan and animal rights activist Joaquin Phoenix. After the actor’s speech at the Oscars in 2020, producer Joslyn Barnes sent him a rough cut of “Gunda,” and eventually Phoenix came on Board as a producer. “He watched it immediately and he called me,” Kossakovsky said. “And his call was amazing. He said, ‘Finally, someone made it and we see them. We see them finally as personalities. We see them as they are.’ He was very supportive, and then he sent it to Paul Thomas Anderson.”