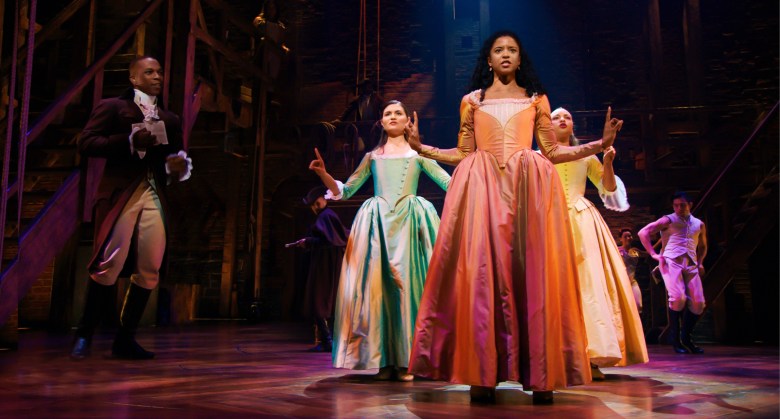 Once upon a not insignificant amount of time, some very talented people performed in a Broadway musical and some other talented people filmed it. The show itself was extremely popular at the time, then 15 months into its ongoing (give or take a pandemic) original run. So popular in fact, less than a week before the three nights over which the event was filmed, the show won 11 — eleven — Tony Awards, the second-most of any Broadway production of all time.

All of which is to say that Lin-Manuel Miranda’s “Hamilton” has had its moment on the stage (sorry). It has been deemed exceptional by a jury of theatrical professionals and earned many accolades to prove it.

But “Hamilton” is leaking and the results might just be undermining the larger structural supports of a different cultural arbiter of quality: The Emmy Awards.

If you’re wondering how or why “Hamilton” could possibly be wreaking havoc with the Emmy Awards, you aren’t wrong to be confused. Back in 2016 when director Thomas Kail and friends took on the task of filming the musical, it was with the intent of eventually bringing the show to the big screen, where individuals unable to see the show live, with most of its original cast, would finally have an opportunity to experience the magic.

But somewhere along the way, that plan was thwarted and Disney+ decided to release the filmed “Hamilton” on its platform during the pandemic. Even then, it wasn’t clear that the film would compete at the Emmy Awards. After all, there were plenty of movies that were exclusively released on streaming platforms last year that were eligible for the Academy Awards, but “Hamilton” was not one of them, according to the Academy of Motion Picture Arts and Sciences.

The Emmys, on the other hand, were more than happy to keep the “Hamilton” awards train rolling. When nominations were revealed last week, the musical had nabbed 12, which is where issues start to reveal themselves.

As a filmed version of a stage musical, “Hamilton” was categorized as a variety special (prerecorded) and as such, that’s the family of categories where several of its nominations lie, including nods for picture editing and sound mixing. But then Kail’s direction scored a nomination in directing for a limited series or TV movie and the wheels started to fall off the bus.

It wasn’t just Kail who suddenly appeared in limited series or TV movie categories. Seven performers from the musical were also nominated, scoring nearly one-third of the 22 nomination slots available.

But why? Those performers starred in neither TV movies nor limited series. They starred in, as previously established, a variety special. (And, honestly, if we want to be technical about it, they appeared in a Broadway musical, which was then filmed, edited into a movie-shaped variety special. Which is all to say that no one on that stage made any distinction within their performance itself to specialize it for a filmed audience.)

And yet, here we are.

But live musicals aren’t pre-recorded musicals. They’re live. And while “Hamilton” was live when it was filmed, that filming was spread over three days and then meticulously edited together into a finished product. Which means that it is not live.

In an attempt to further explain, the spokesperson told THR, “the Television Academy’s interpretation of the rule” has been in place “ever since the [individual performance in a variety or music program Emmy] went away over a decade ago. This is similar to how sketch comedy performers playing roles have been allowed to enter the comedy performer categories.”

Of course, if you don’t think that sketch comedy performers should be competing in the supporting acting categories for comedy series, that comparison is going to do more harm than good.

We talk about it again and again, but TV is still in the midst of an ongoing evolution and no one knows exactly what the other side of Peak TV will look like. But the answer to growing pains is not to try to force everything to fit into the ill-fitting jeans of old categories. It’s to throw open the doors of the wardrobe and make sure that the categories moving forward are modified to better reflect the changing face of TV. And if modification isn’t the TV Academy’s jam, then add categories.

Yes, this year there are 119 categories and that’s a lot. But television is a lot and it continues to expand and grow with each passing year, adding methods of consumption and new players and exciting new forms of storytelling. The TV landscape is fluid and so too must be the TV Academy.

For more exasperation and confusion about “Hamilton” and the TV Academy, tune in to this week’s episode of IndieWire’s TV podcast “Millions of Screens” with Deputy TV Editor Ben Travers, Creative Producer Leo Garcia, and TV Awards Editor Libby Hill. Then stay tuned as Ben and Leo hash out the season finale of Disney+’s “Loki” as Libby breaks down the TCA Award nominations which — surprise, surprise! — seem like they were selected by a group of people who watch television.