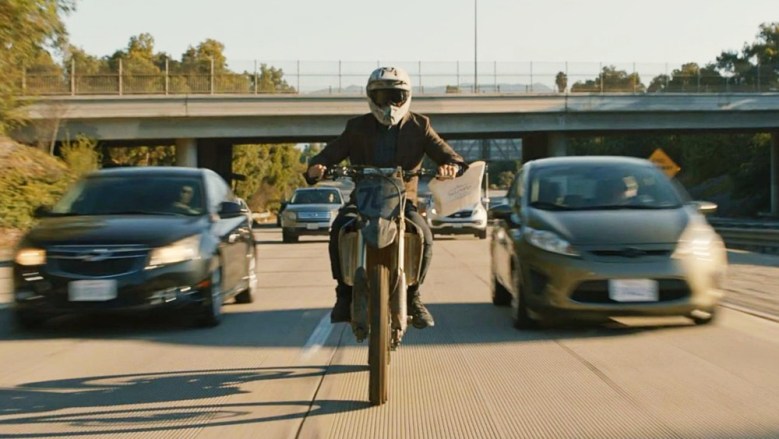 According to Bill Hader, the original script for Episode 6 of “Barry” Season 3 was remarkably sparse and to the point: “Barry gets chased, ends up at Sharon’s house.” While on the Toolkit podcast, the co-creator laughed recalling that one sentence, which over a year-long creative process would transform into arguably his greatest achievement so far as a director.

In the video above, Hader breaks down that process, and his fight to shoot a traditional, well-covered action sequence that was created in the edit. “What was interesting to me was not making it an action sequence, but making it feel a little bit removed,” explained Hader. “I find merging onto freeways to be terrifying. And so I said, ‘I just want the feeling of merging under a freeway in that you’re on a motorcycle that’s weak and falling apart, and all these cars are rushing past you.”

Watch Hader break down the chase scene above, or listen to the entire discussion below.

Barry’s motorcycle adventure was only part of what was a jam-packed episode that saw a number of storylines collide in just 30 minutes. One of the screenwriting devices cooked up by Hader and writer Duffy Boudreau to help streamline matters was the creation of the “Beignets by Mitch” character (Tom Allen), a pastry chef who serves as surrogate therapist for the characters.

In video below, watch Hader talk about the honing of the script and Beignets by Mitch:

Hader: I think if I was making this stuff when I was in my early 20s it would be very much about other films, or in the stories it would be about other films. And then as you get in your 40s, like me, life happens and life is actually a lot more messier and complicated and interesting than a lot of movies. [G]rowing up, watching movies sometimes, I felt betrayed because like, ‘This isn’t what I saw in the movies.’

People talk about tone a lot with “Barry,” but as you live more, you see that funny and tragic happen right next to each other a lot of times. And it’s happening every day, you know, it’s like, you’re having a fun moment, and then someone comes in and they read something, someone died or whatever — you just suddenly change the temperature of the room, and then within 20 minutes, you’re laughing again about something else because people don’t want to think about the terrible thing. So I think, in that regard, I’m glad I’m making this stuff now. You know, because I think if I tried it earlier, it would have been pastiche [Laughs], even more so — not saying what I’m doing now isn’t, but it would be really pastiche.

Hader: It’s impossible not to go out to that desert location and not try to make it look like “The Searchers” or Sergio Leone. It kind of dictates that style. A lot of times it’s the emotion of the characters, especially the stuff of him getting this second chance.

The universe wants [Fuches, played by Stephen Root] to be on a farm with goats, with a lovely woman. That’s what the universe wants. And he keeps fucking it up because he’s angry with Barry. And so, yeah, in his mind, he’s in “Dances with Wolves,” or something and he’s only 20 minutes outside of LA. I find that really funny.

One of my favorite scenes in the entire season is a scene with him and the farmer in the truck because it was played so straight… It could not be a better situation for him. And yet he’s still fucks it up because he’s angry. That’s a lot of times will dictate the style of it, and not pushing the comedy is always a big thing for me.

Things Are About to Get Bleak: Directing Episodes 6, 7 & 8

Hader [on deciding to direct the last three episodes of Season 3]: The last three do kind of ramp into something, but I feel like [Episode] 6 is like where the fun stuff ends. [Laughs] I talked to our colorist who was coloring the last episode and he said, “I had to go on a couple of walks.” So yeah, it’s, it’s a tough one, but [Episodes] 6, 7, and 8 I do feel are of a piece.