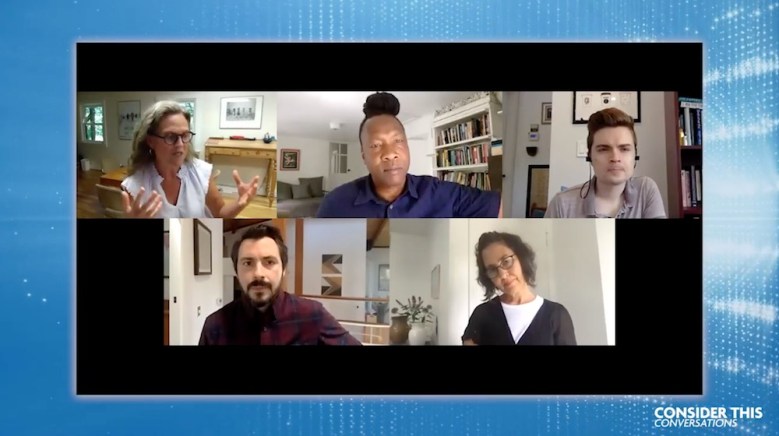 Whether they’re finding and cutting together archival footage or capturing their own lives through a filmmaker’s lens, documentarians have to develop an eye for appreciating significant moments in time — and a skill for getting their audience to appreciate them, too.

“As documentary filmmakers, sometimes our job is to say, ‘No, look! Really: Look!‘ — because we’ve become so anesthetized to celebrity and so anesthetized to brilliance, in a way,” Irene Taylor said during the above panel. “All the filmmakers here, when we see something that’s really well done, we weep — because it’s so profoundly difficult to achieve that, and we know that because we do this thing called craft, as well.”

Taylor directed HBO’s Emmy-nominated documentary “Moonlight Sonata: Deafness in Three Movements,” which follows her son as he tries to learn Ludwig van Beethoven’s iconic piece. Both Beethoven and Taylor’s son were struggling with deafness as they worked to perfect the challenging sonata.

“I just started to organically film my son trying to learn this piece, and eventually I brought it to colleagues of mine at HBO, and they looked at me and said, ‘When are we going to start making this movie?’” Taylor said. “In Beethoven’s case, hopefully it comments that he was making the music he did not in spite of his deafness — which is the narrative we often hear about disability: ‘In spite of this, they accomplished that.’ This is really because of this, they accomplished that; because of the deafness, we are who we are, and because of the deafness, Beethoven accomplished this piece.”

Finding and highlighting artistic accomplishments, as well as significant moments in everyday life, is a vital part of many documentaries, and especially those made by Taylor’s fellow panelists. Oscar winner Roger Ross Williams directed, wrote, and produced “The Apollo,” a tightly crafted 98-minute documentary that digs into the vital history of Harlem’s iconic theatre, as well as the pivotal artists who performed there; Amy Schatz, a seven-time Emmy winner, directed and produced “We Are the Dream: The Kids of Oakland’s MLK Oratical Fest,” which follows a group of talented students who compete in the annual speech and spoken-word competition; Brian Lazarte is the co-director, co-writer, executive producer, and co-editor on HBO’s popular “McMillions” docuseries, which made great use of real-life subjects to tell the story of McDonald’s Monopoly game scandal.

“Our whole ’90s, McDonald’s was such a treat,” Lazarte said. “Regardless of class, regardless of your dietary concerns, you wanted to go to McDonald’s for breakfast, lunch, and dinner when you were a kid — and this game really fueled your desire to go there, to play, to win a million dollars.”

So when Lazarete and co-director James Lee Hernandez came across a Reddit thread revealing the game’s corrupted backstory, they not only had to know more, but they knew how to introduce that same compulsion to their viewers. “The more we started looking into it, the bigger and bigger the story became,” Lazarte said. “It was evident, out of the gate, that we had great storytellers. The characters who were there, who were part of this journey, were just filled with riches — in terms of their points of view and how they handled this particular case. We became obsessed with it.”

Williams, meanwhile, tackled a project that had been in the works for ages without ever finding the right path forward.

“People had been trying to make it for many, many, many years, and there had never been a documentary about the Apollo Theater [and] its 85 years of history — the literal history of Black music and art in America,” Williams said. “Everything done on that stage is political, and that stage has been the way we broadcast to the world where we are, who we are, our situation. So early in the film, when Billie Holiday stands on that stage and sings ’Strange Fruit,’ it’s the only place she could do that. […] That song was banned on radio stations. And you flash forward to James Brown standing on that stage singing ‘I’m Black, and I’m Proud’ in 1968, a tumultuous year in America, it was a rallying cry for Black America.”

It became important to Williams that he connect the past with the present through these performances. Though discouraging in the lack of progress, voices of the Apollo’s early days built to the fever pitch we’re living through now.

“In 1934, when the Apollo opened its doors and Ella Fitzgerald won the first Amateur Night, there were riots and the shooting of unarmed Black men. It happened literally like clockwork. Every few years, there would be shootings, police brutality, shootings — it’s this pattern, and it still continues to this day, of course,” Williams said. “So for me, it was about, ‘What is the response from the Black community from that stage?’”

For Schatz, the culmination of her story would be seen from the stage, but it all started in classrooms scattered across a massive school district. Students would work with teachers and coaches to prepare their own spoken word poetry or issue-driven speeches inspired by the legacy of Dr. Martin Luther King Jr. From there, they would compete at their own school, and winners would move on to perform once more in the festival’s final round.

“The challenge was there were hundreds of students who participate in this festival from 140 schools,” Schatz said. “So figuring out who the characters were [before completing filming] was an impossible task.”

Schatz said she and her team, thinking the thrust of their film would come from the competition, first tried to pick out the top contenders in Oakland’s MLK Oratorical Festival. But soon, she learned the best thing she could do was hear what each student was saying and craft her story around their words.

“I cried throughout,” Schatz said. “I was deeply moved by what these kids had to say. What surprised me was hearing these immigrant children in a class mixed with first generation Americans, kids who didn’t speak English [that well], deciding to write a poem about the beauty of being an immigrant and who immigrants are in this country. The bravery, the outrage, and the power of kids who had been the object of such ridicule, I was just blown away by the power of those voices.”

Discovering a good story is one thing. Accentuating its distinct qualities for a new audience is another. Each of these documentarians managed to capture the unique aspects of their stories, elevate them, and hone compelling, moving, and illuminating films and series. Now, it’s our turn to listen.

Consider This: Conversations highlight television’s award-worthy productions through panel discussions with the artists themselves. The above video is presented by HBO and hosted by IndieWire’s TV Deputy Editor and Critic Ben Travers. “The Apollo,” “We Are the Dream: The Kids of Oakland MLK Oratorical Fest,” “Moonlight Sonata: Deafness in Three Movements,” and “McMillions” are all available to stream via HBO Max.

This Article is related to: Awards and tagged Consider This Panels, Direct, Emmys, HBO, McMillions, The Apollo, Video