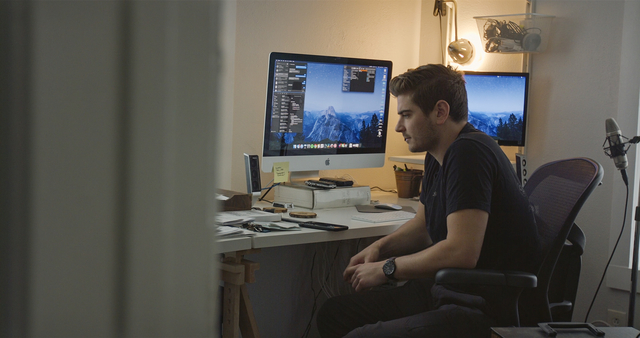 Director Madison Hamburg dove into the directing game feet first, turning what started as a college film project into a documentary series on HBO. The finished product, “Murder on Middle Beach,”follows Hamburg from young adult to manhood as he attempts to learn more about his mother in the wake of her brutal murder.

“I always knew that I needed to do this,” Hamburg told IndieWire in the above video, but he struggled with putting his family in the spotlight. “There’s this weird stigma around telling someone that my mom had been murdered,” he said. “I felt a weird sense of shame…I wanted to change that stigma.” For Hamburg, much of what anchored his project was moving away from what we know as the world of true crime, an industry often criticized for fetishizing and exploiting women and trauma. “I really wanted to give the victim’s perspective,” Hamburg said, “and [show] the ripple effects of an unsolved murder.”

Hamburg said he fought hard for the inclusion of public service announcements from the 1950s and 1960s to be included in the documentary to emphasize the duality women had to face in their lives. That sense of public and private persona, Hamburg said, took on added significance while working on the project. “There’s this theme of duality between the facades of American idealism and the sheltered upbringing I had,” he said.

Because “Murder on Middle Beach” is constructed with an emphasis on the familial dynamic within the Hamburg family,  first-time director knew it would be a tough sell. It’s a really hard thing to pitch to networks. This isn’t a whodunit, this is a story about identity, and family, and grief,” Hamburg said. Being compared to the likes of “Dear Zachary,” a similar documentary aimed at family and love in the wake of a true crime event, is an honor for Hamburg and more in line with what he hopes people will get out of the series. “It’s for anyone who has a mom,” he said.

It is that reminder that makes “Murder on Middle Beach” not only effective, but relatable to families everywhere. Hamburg says in learning about his mother’s life, he came to see how much of an impact she’s had on his own personality: “I always thought my obsessiveness came from my loss and trying to deal with grief…but I learned my mom was going out of her way to do investigative steps [during her divorce]. I don’t know, maybe I get that from her.”

This Article is related to: Television and tagged HBO, Madison Hamburg, Murder on Middle Beach