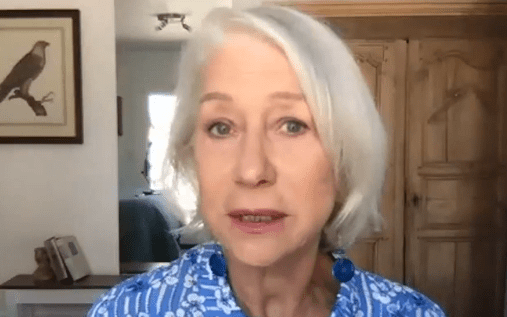 Helen Mirren loves playing women with power. She won an Oscar for playing Elizabeth II in “The Queen,” and a Tony for playing her again in another Peter Morgan drama, “The Audience.” In the interview above, we Zoomed with the actress, situated in the spare bedroom of the Northern California home she shares with husband Taylor Hackford, to dig into her “Catherine the Great” for HBO. Set in opulent 18th Century Russia, the four-hour limited series, written by Nigel Williams (“Elizabeth I”) and directed by Philip Martin (“The Crown”), is jam-packed with romance, court intrigue and the theater of politics.

Of all the queens she’s played, from Shakespeare’s Titania to Cleopatra, “they don’t come any more powerful than Catherine the Great,” said Mirren. “It’s the most extraordinary story of a young woman having the courage and intelligence and tenacity and intellect to be able to say, ‘I can do this, run this complex difficult country.’ Then of course after she died, everything she accomplished, with incredible success, everything she achieved, her son tried to destroy.”

Powerful men maligned her, damaging her reputation. “It was mostly the lies spread about her by Frederick the Great,” said Mirren, “who hated her because she was powerful and successful and she stood up to him. He couldn’t stand that she was woman who was successful.”

After Catherine arrived from Prussia at 16 years old, she embraced Russia, joined the church, and committed to the country. “She understood she had the capability to run the country better than her husband,” said Mirren, who doesn’t view Catherine as power-hungry. “He was literally mad. It’s similar to Elizabeth II and I, was that acceptance of destiny. ‘This is falling on your shoulders. Are you up for it?’ In the case of Elizabeth I and II and Catherine, all three of them stood there, put their shoulders and chins up and said, ‘We can do this.'”

Helen Mirren in “Catherine the Great”

As she built her career, from the London theater to early film hits like “Excalibur” and “The Cook, The Thief, His Wife & Her Lover,” Mirren was always looking for proactive roles instead of observers from the sidelines. “For such a large part of my career that was the case,” she said, “those were the kinds of roles that in general were written for women.”

But as the ruler of a country, “you’re going to be proactive,” she said. “You are the center of the action, really, that’s part of the attraction, definitely… It’s still an unknown world, we have no comprehension what it’s like to live in the middle of that environment, that history, that sycophancy.”

Mirren has always remembered to add the human touch to her regal figures. She has never forgotten when she got her first period: “My mother said the most wonderful thing to me: ‘Even the Queen has a period.’ It was like, ‘The Queen?’ To put the Queen in the world of ordinary humanity really took my breath away. Ever since then, the effort is to find the simple human being: the vulnerabilities, the insecurities, the fears, the desires, the moments of elation and moments of desperation we can connect with.”

Luckily Mirren was able to find the authentic voice of Catherine the Great through the regent’s letters to her mother, as well as the French intellectual Voltaire, ambassadors and heads of state, and her beloved Grigory Potemkin (Jason Clarke). “That was her guy,” she said. “Whether they got married is a question. If they got married, they got married secretly. She calls him my husband in letters to him, whether it’s literally or poetically. They were the loves of each other’s lives without a doubt.”

Clarke brings hulking athleticism and tenderness to the military leader, as well as chemistry. “I have a big thing for him,” said Mirren. “My husband is not listening in! What a perfect Potemkin: because he had that combination of raunchiness, and roughness and masculinity, with a great feminine side, with gentleness and care and support. He was immeasurably supportive to Catherine.”

But not always— at one point, he complains that he feels like a schoolgirl. That’s a role reversal indeed for a powerful Russian general. Everything is out in the open at court, as Potemkin gets dressed in the wide-open hallways and people enter their sleeping chambers at will.

A prodigious worker, Catherine held onto power for 30 years, refusing to share the throne, and she also loved to play, whether gambling with diamonds or cross-dressing at a fancy costume ball — or dallying with younger men. Her desires were not as insatiable or deviant as history suggests, but her lusty pleasures were typical of the time. While Mirren intellectually believes a woman of any age can have fun with whomever she pleases, she had to get over her own cultural conditioning to play Catherine. “Because I grew up in a cultural environment where those liaisons were disapproved of, coming to do Catherine,” she said, “I had to rethink it… It was absolutely culturally acceptable in that court at that time. It was basically, if you were in power you could do whatever you like!”

This Article is related to: Awards and tagged Catherine The Great, Consider This Panels, Direct, Emmys, HBO, Helen Mirren, Video