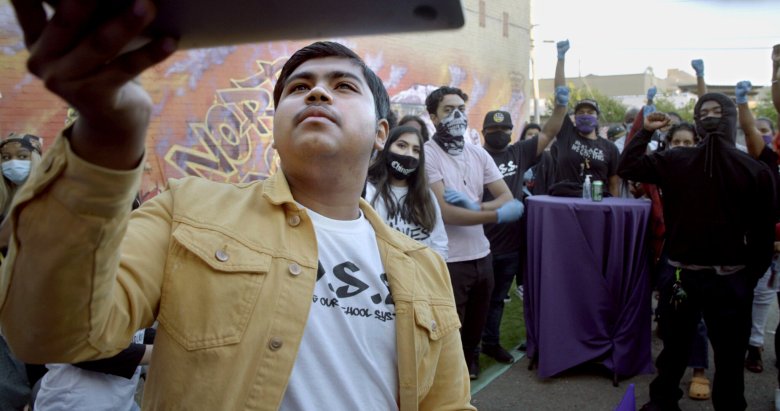 For his 2012 documentary “The Waiting Room,” about uninsured people navigating the healthcare system, filmmaker Peter Nicks interviewed a variety of individuals at the Highland Hospital in Oakland, California. One of them was a middle school girl waiting to be treated for a gunshot wound. Intrigued by that shocking encounter, he thought of pursuing a broader narrative that evinced how institutional shortcomings — in education, healthcare, and the criminal justice system — negatively affect the lives of young people.

That was the origin of his latest doc feature “Homeroom,” which premiered at the 2021 Sundance Film Festival. With a strictly observational eye, the film chronicles the 2019-2020 school year at Oakland High School, located around the corner from the Edna Brewer middle school where the shooting incident that first inspired Nicks occurred. Among the multiple subjects, the clear protagonist is Denilson Garibo, an undocumented teen and student director on the Oakland Unified School District board.

While the first half of the narrative centers on Garibo and his colleagues’ activism to remove police presence from Oakland schools, when the COVID-19 crisis hit, followed by the eruption of the Black Lives Matter movement into the mainstream, the dynamics of their work shifted. Dealing with the reality that their senior year wouldn’t turn out as they imagined, they remained concentrated in their desire for meaningful change.

When Nicks started shooting, in 2019, his initial intent was to explore the inner lives of young of people of color, partly in reaction to his own grief. Just a few months prior, the director’s daughter passed away from a drug overdose. For him, witnessing the students’ strength was a glimmer of hope in the rubble of all that was lost in the last year. Ultimately the movie became less about his original vision as a storyteller and more about what these kids were doing and the serendipity of him and his team being there to capture it.

“We all remember when we were younger thinking about walking across that stage, or going to prom, or performing the school play, going to senior parties, all that was taken away from them in a similar way that so much was taken away from us collectively because of COVID and other things. So to see how they found their voice in the wake of that is a deeply emotional revelation,” said Nicks during a Q&A as part of the International Documentary Association’s annual screening series.

Now college students, Garibo and Jessica Ramos, another student leader that appeared in the film, recalled how the pandemic put their mental health at risk, as they tried to fight the inequities around them, while simultaneously dealing with regular school duties, and the uncertainty of the future. Amid the chaos, their resilience, commitment to their communities, and unity carry them through. Watch the video of the conversation between Nicks, Garibo, and Ramos with journalist Jarrett Hill.

“We are all leaders in our own way…I recognize, however, that there is a sense of trauma in our community that does not let everyone speak up or get involved and all of that, which is why I see myself doing that for those vulnerable communities,” said Garibo. “I see myself fighting for everyone in my community and being a good ally standing in solidarity with them. To me that’s what makes me a leader.”

Out of his three feature works to date, Nicks considers “Homeroom” his most hopeful effort since it shows how deftly young people are engaging with society’s systems and using the tools at their disposal to address the issues that affect them and those around them. Not only does he wish that adults don’t dismiss the youth’s work and concerns, but that they realize that it may be time to bring them into the process of formulating effective policies.

“People don’t fully understand what these kids have to overcome just to graduate beyond just getting the grades, getting the SAT scores, and getting into those schools,” said Nicks. “They are nevertheless in possession of a skill set born from these struggles, and these challenges, and this trauma, that really allow them to be the leaders that they are and that was one of the most profound realizations that we had.”

This Article is related to: Film and tagged Homeroom, Hulu, International Documentary Association