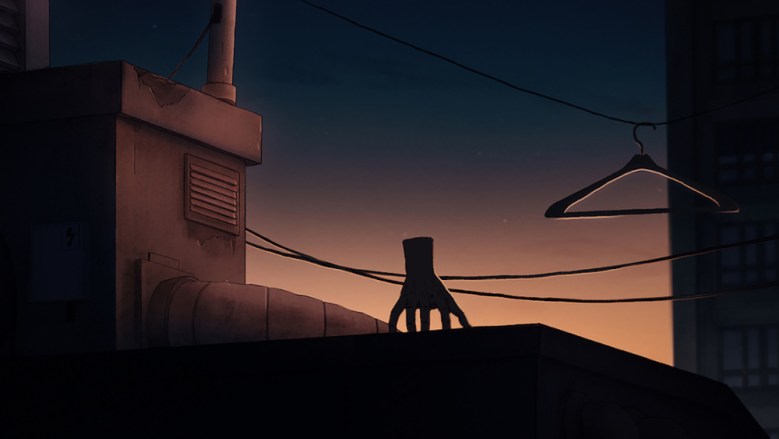 Oscar-winners Phil Lord and Chris Miller (“Spider-Man: Into the Spider-Verse”) are such big fans of Jérémy Clapin’s debut feature “I Lost My Body,” the first animated film to win the Cannes Critics’ Week prize, that they jumped at the chance to sit down with him.

Check out their conversation above about how he transformed Guillaume Laurent’s book about a severed hand trying to be reunited with its body into a movie that landed in the Best Animated Feature Oscar race. They roam across many topics, from the current state of animation and the need for innovation to expanding the audience for animated films.

Read More: Netflix’s ‘I Lost My Body’ Is the Year’s Boldest Animated Feature

Having made short films, Clapin was not expecting an opportunity to adapt a book for a feature, but the producer believed in him as they tried to find funding for their pitch about a severed hand roaming around Paris.

“It was really hard to see the poetry behind this picture about a severed hand,” said Clapin. ‘It’s about the rest of the body. It’s about us, what is it to be human, it’s an existential quest about love and loss. How do you say that in a pitch? So we failed to get funding and the producer had to put up the money. It’s more about an experience. You are not prepared to see that. You have to be moved to travel in some area you weren’t expecting to go.”

The director abandoned the book’s narrator, because he wanted the hand to have its own point of view. He “improvised” on storyboards, he said, as he figured out how to make the hand naturalistic and reactive, not “funny or creepy.”

The result is a movie unlike any other, that is not just for kids but everyone. “Today, this kind of film will help animation to move forward, to bring something new to the audience,” said Clapin, who was anxious when they unveiled the film at Cannes. “We don’t need to justify why we’re doing animation for adults. But people are not aware of that. Our purpose was to bring something new, but we never knew how it would be accepted.”

The film uses many kinds of storytelling to chase its narrative. “We always say animation is not a genre,” said Lord.

“The difficult part is how you bring people used to seeing animation for kids,” said Clapin. “It’s so it’s hard to bring people to watch animation with a new fresh eye.”

“It feels very visceral, very emotional,” said Miller. “You’re rooting for this severed hand, which is a crazy achievement.”

“It’s a movie about empathy,” said Lord. “It helps me empathize with a hand and its journey, getting to know all these lovely people, all expressed through movement. The movement of that hand tells the story. It has charm and character, it’s the essence of what’s magical about animation, it brings life to things.”

“This kind of concept is a gift for the director,” said Clapin. “It justified playing with all the genres. With the epic travel of the hand, you have to express all the moments of life, how is it to struggle, to survive?”

This Article is related to: Awards and tagged Animation, Best Animated Feature, I Lost My Body, Oscars, Video