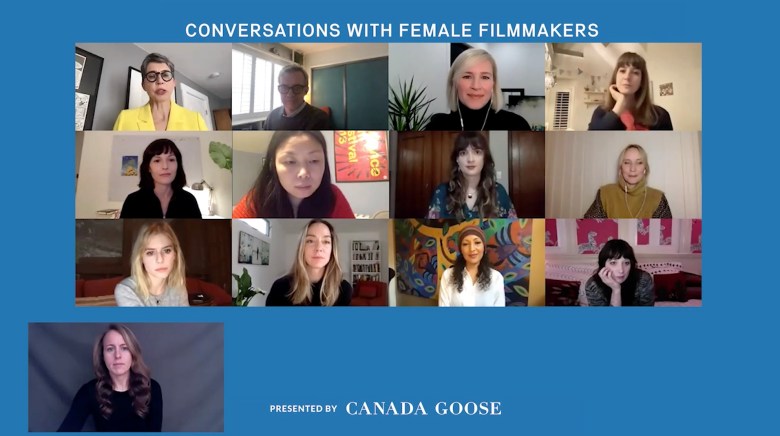 The virtual Sundance Film Festival was forced to abandon Main Street this year, but the tradition of Canada Goose and IndieWire partnering to celebrate female filmmakers could not be stopped. We reimagined a private and virtual version of our annual sit-down dinner on January 29 for an evening that brought together some of indie film’s best and brightest, including Sian Heder, Nanfu Wang, Mona Fastvold, Lucy Walker, Jessica Beshir, Carlson Young, Erin Vassilopoulos, and many more.

At this year’s Sundance, 50 percent of the festival’s feature films were directed by one or more women (after years of getting close, this year’s Sundance will be the first to unfold with gender parity behind the camera). Their projects include some of the hottest at the festival, including Heder’s “CODA,” Wang’s “In the Same Breath,” Fastvold’s “The World to Come,” and more.

IndieWire’s editor in chief Dana Harris-Bridson welcomed the group with a heartfelt opening statement, telling them, “This is our third time to partner at Sundance, and our first time on Zoom. Full disclosure: I miss being able to have this event in person. Selfishly speaking, I get a first-hand buzz from gathering so many great filmmakers in the same room and watching connections and friendships being made in real time.”

She added, “I say this at our dinner every year, because it’s true: This is not just another Sundance party. It’s small, it’s curated, and it’s dedicated to celebrating your work. But this year I realized there’s a silver lining in the social distancing, and it’s this: We don’t need Park City and Main Street to create it. What makes the evening special belongs to you. So tonight, we’re going to talk from the comfort of our homes about your films, your careers, and anything else you’d like. IndieWire and Canada Goose are every bit as honored to host you via routers and modems as we would be in Park City on Main Street. This evening belongs to you.”

Added Canada Goose’s North America president Carrie Baker in her own welcome remarks, “There is power in women coming together — virtually or face to face — and in sharing experiences and telling stories, with one another, and with the world. So, this is a very powerful evening. Part of our journey, which spans more than 60 years, has been as a warm companion on film sets around the world. Our jackets have played a supporting role in helping filmmakers like you, to do their best work, to tell incredible and inspiring stories.”

Baker continued, “We are grateful to continue that journey with you tonight, as we celebrate your success in breaking barriers, breaking new stories, and breaking new ground.”

Harris-Bridson then posed a question to the entire group — even in virtual confines, the filmmakers seemed eager to share with each other — which garnered a number of insightful answers: “Why is Sundance an important platform for women in film?” She added, “Nearly fifty percent of the films at Sundance this year are directed by women, the most in the festival’s history. What makes that important for you? Is it having the Sundance name on your CV? Does that parity create a halo effect? Does it make a statement to the industry?”

Heder, whose “CODA” sold for a record-breaking $25 million to Apple mere hours after the event, jumped right in with an answer. “The world is fifty percent women, more! It’s absurd that the numbers have been the way they’ve been for so long,” she said. “There’s a little bit of like an eyeroll, probably from all women in the world, that like, ‘look what we’ve done, we’ve created equal numbers.’ And I do applaud Sundance for that, but it should always be that way. We are half the stories that need to be told, we are half the artists in the world. It feels like it’s been a long time coming.”

Added “Violation” co-director Madeleine Sims-Fewer, “I’ve wanted to be a director since I was five years old, and it’s always been my dream. I think, as a little girl, looking to Sundance, and I did, because I would see the Sundance laurels on films I admired and loved, so I really looked to Sundance as like a pinnacle to me. And then you go to film school, you go out to the real world, and you’re faced with so much competition and hostility, as a woman, you really do feel that. I think Sundance is important, because it’s so vital to see women filmmakers achieving that pinnacle. I feel like I belong in this world that I’ve been striving to be a part of for so long.

Wang, whose COVID documentary “In the Same Breath” opened the festival, shared her own thoughts. “As a woman, as a woman of color, I needed to fight for the right to speak, fight for the opportunity to be heard, to be seen,” Wang said. “Sundance, to me, is a place, especially Sundance Institute, is a place that is run by women.” That, many of the guests noted, makes a huge difference.

Here’s the full list of directors who were honored at the IndieWire Female Filmmakers Event at Sundance, presented by Canada Goose.

Check out our video wrap-up of the event above, with some of the festival’s biggest rising stars discussing their films and their festival experience in the virtual space.