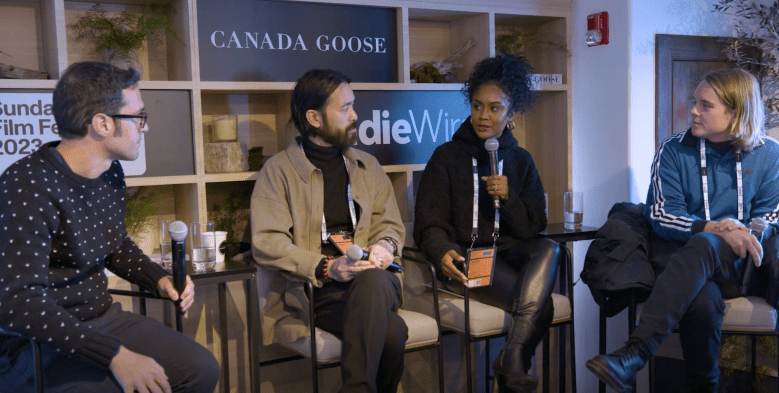 IndieWire continued its tradition of using Sundance as an opportunity to highlight emerging filmmakers when it hosted the annual First Time Filmmakers Panel, presented by Canada Goose.

The event, which took place 1:00pm MT on Saturday the 20th at the Canada Goose Base Camp in Park City, featured IndieWire’s Eric Kohn moderating a discussion between “The Accidental Getaway Driver” director Sing J. Lee, “A Thousand and One” director A.V. Rockwell, and “Mutt” director Vuk Lungulov-Klotz. The three filmmakers took dramatically different paths to make their first features, but they all spoke about the passion and perseverance required to navigate the many challenges that go into independent filmmaking.

“Someone once told me, ‘would you sell everything to make something? To make this thing that you’re doing?’” Lee said. “And it’s not a literal question, it’s just how much do you believe in it? Yourself, your idea, and your aspirations. If you can’t answer that question, maybe you need more time to think about it. I think that belief, that unrelenting belief is needed. Because if it’s not this moment, it’s gonna be another moment.”

But passion can only get you so far. Even after you have financing in place, getting an independent film across the finish line always takes a can-do attitude and a bit of craftiness. Rockwell spoke about the difficulty on pulling off a period piece with a low budget, and explained that shooting a film in New York City comes with a unique set of pros and cons.

“If anything, it was just challenging logistically making that work,” Rockwell said. “There might be a mom-and-pop shop that’s been there for 40 years, but it might be next to a Whole Foods. If we just crop that out, it’s great! But the challenge was more, ‘how do you get all these wonderful places to work for a shoot date?’”

As difficult as it can be to make your first feature, life after the big premiere can be even harder in some cases. There’s no simple blueprint for building a filmmaking career after a strong showing on the festival circuit, and it can be hard to find opportunities to grow as an artist in an a film industry that’s dominated by blockbusters. But all of the filmmakers spoke about the importance of staying true to one’s self while trying to navigate the process of developing new projects and fielding offers for larger opportunities.

“It’s important to me to keep speaking from my truth,” Lungulov-Klotz said. “I’m very attuned to that, and I feel I have a very strong intuition. So if something comes along that I resonate with, I will do that of course.”

“There are so many filmmakers that are fighting to get their scripts done, fighting to get into production and get someone to support it. So I think I’m just grateful to be here with my first feature,” Rockwell said. “As far as what I do next, I’m just going with the flow. What has always energized me as a filmmaker is what I’m doing for people, what I’m doing for audiences…what invigorates me is how I can make a difference in other people’s lives as a storyteller.”

“We talk about things that aren’t afforded to you immediately, but that’s maybe the door closing because the right one’s gonna open,” Lee said. “You just need to hold out.”

This Article is related to: Film and tagged canada-goose, Mutt, Sundance, Sundance 2023, The Accidental Getaway Driver