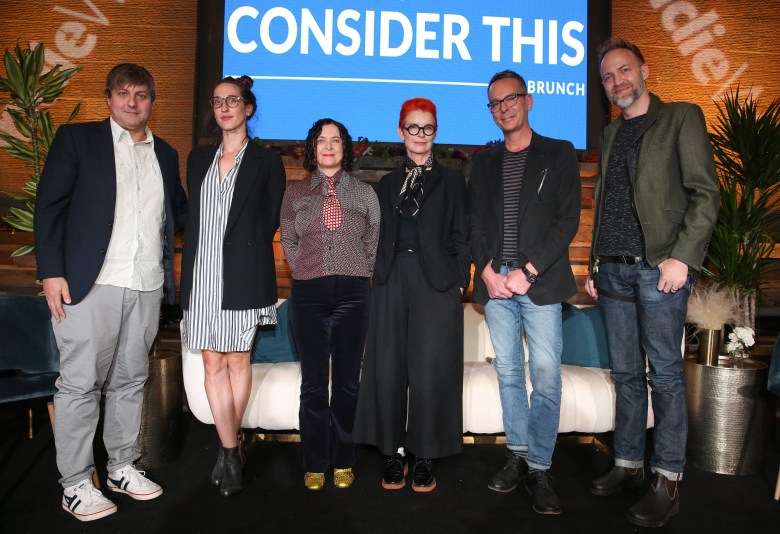 So much of what goes into making a movie come to life from script to screen happens below the line — from production design to costuming and music. The first-ever IndieWire Consider This FYC Brunch on Tuesday in Hollywood celebrated those craftspeople who created the look, sound, and feel of the year’s top contenders.

The brunch’s opening panel featured Jade Healy (production designer, “Marriage Story”), Deborah Cook (costume designer, “Missing Link”), Nathan Johnson (composer, “Knives Out”), and Sandy Powell and Christopher Peterson (costume designers, “The Irishman”), all in conversation with IndieWire Toolkit Editor Chris O’Falt. For each of the filmmakers, it was a question of working against the clock due to scheduling, or working entirely free from it — as was the case with Nathan Johnson.

“In making art, the goal is to make something new, and it’s really hard to make something new if you don’t have the space to explore and go down rabbit holes that might not turn into something,” said Johnson, whose brother, “Knives Out” director Rian Johnson, had been shaping the idea for the murder-mystery chamber thriller for 10 years.

Animation house Laika’s Deborah Cook had the unusual task of designing costumes for “Missing Link,” a stop-motion animated film, which is a genre with its own challenging relationship to time.

“If it’s a real person, live-action, wearing a costume, they move with that person, and all of that comes for free. With our animation characters, they’re one-fifth or one-sixth scale, and we have to build in and engineer all of that understructure to make them work they move, so that the flow of the costume, which is shot 24 frames a second, looks like it’s actually in movement,” Cook said in regard to preparations on the animated adventure.

For “Marriage Story,” Jade Healy had to hit the ground running for a shoot that would last just over a month and a half. “Usually when I have a meeting with a director, I have time to do a look-book, but it was pretty quick on this one,” Jade Healy said as she prepared to meet “Marriage Story” director Noah Baumbach to prepare for their film which traverses both U.S. coasts in its portrait of a dissolving marriage.

For her approach to the production design, Healy said, “We used a lot of negative space” and experimented with different hues of white to show the contrast between “LA whites and New York whites,” to really capture the different quality of the light in the two cities.

For the costume designers on “The Irishman,” timing was also critical, both in the lead-up to production, and in actually outfitting the cast, which includes Robert De Niro, Joe Pesci, and Al Pacino. “We spent so much time with these guys in fittings, like with Bob [De Niro], four-hour fittings, and at least 10 or 12 of them over a period of time. That’s like a couple of weeks of fittings,” Sandy Powell said. “He always asked when the next one was at the end of a fitting. He’s that into it.”

On the heels of a busy year, Powell knew she couldn’t do the movie alone. “I was finishing up on ‘Mary Poppins’ and ‘The Favourite,’ which I somehow managed to do simultaneously. And ‘The Irishman’ came up and it would have meant me starting really the minute I’d finished both of those…[so] I brought in Christopher and asked if he would co-design with me.”

“The volume of work is certainly daunting when you pick up the script and realize you’d be better suited to a time machine,” said Christopher Peterson on the daunting task of mounting Martin Scorsese’s crime epic, which is set across six decades. “Marty’s projects are usually in gestation for years at a time.”

This Article is related to: Awards and tagged fyc awards brunch, Knives Out, Marriage Story, The Irishman, Video