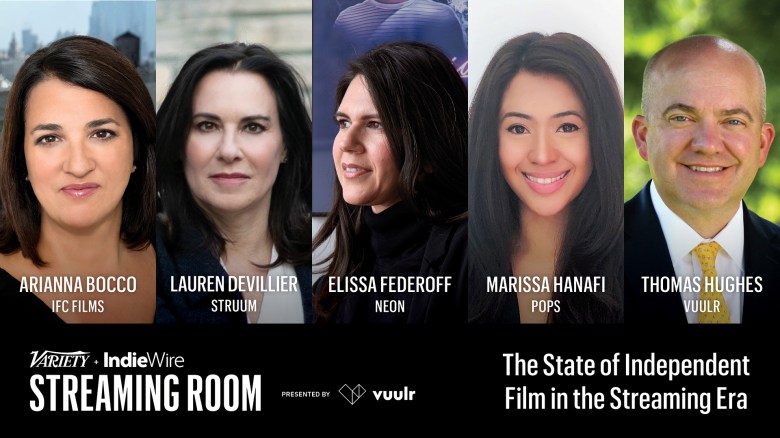 The fast-evolving entertainment landscape is creating new strategies in the independent film space, changes only accelerated by the pandemic. During the Variety & IndieWire Streaming Room presented by Vuulr, executives from Neon, IFC Films, Pops, Struum, and Vuulr agreed that one way to understand those changes is to embrace the fact that the entertainment business, now more than ever, is an international one.

“Netflix isn’t a global platform, it’s 18 different things across the global — however many versions there are … What’s popular here isn’t going to be popular in many territories across the world. No disrespect — does ‘Judge Judy’ travel? I don’t know,” Vuulr CEO of The Americas Thomas Hughes said. “That means that those streamers that have global aspirations have to be something different in different territories to attract those viewers, that means you have to acquire in territories local content to compliment what you’re doing.”

Vuulr launched two years ago and serves as a global online marketplace for film and TV rights. Hughes, former Lionsgate distribution EVP, joined the company in January to spearhead the opening of Vuulr’s Los Angeles office.

The increasing role of American companies in the international space was just one subject covered in the wide-ranging conversation titled “The State of Independent Film in the Streaming Era,” moderated by IndieWire Executive Editor Eric Kohn. He was joined by Hughes, Neon President of Distribution Elissa Federoff, IFC Films President Arianna Bocco, POPS Head of OTT Marissa Hanafi, and Struum CEO Lauren DeVillier.

DeVillier and her partners co-founded Struum as a solution to helping audiences find content on smaller streaming platforms. Struum aggregates movies and shows from streamers like MagellanTV and IndieFlix under one subscription.

“We can’t be a U.S.-only platform. We are planning to roll out globally. As we look at our content partners, a lot of these companies can’t really take themselves global because to build a platform is expensive. They are looking to us to distribute their content globally,” she said. “Localizing of language, localizing of currency, it’s a huge lift for a lot of these companies.”

“You get drowned unless you truly stand out in content,” she said. “Because we’re out here in Asia, there are so many untold stories in multiple formats that are so varied and so beautiful and separated by local vernaculars. In this day and age when anyone from around the world can access that if its made available to them, that’s a really beautiful thing.

One example is producing LGBTQ series, groundbreaking and needed due to the lack of representation on screen for that community in Asia, she said.

Bocco and Federoff discussed how Neon and IFC — both domestic distributors — collaborate more and more with the tapestry of companies that are distributing the same films as them across the globe, what Federoff described as creating a “thematic thread.”

“The reality is if someone YouTubes a trailer, they’re going to find the international trailer if it’s out first,” Federoff said. “We want to make sure our materials are going to be only making each other better.”

Bocco said that also means synchronizing windows between distributors of a given film and following a schedule that is much faster than ever.

“Everything is much more immediate in terms of when we acquire a film to when we release a film,” she said. “We have three films in Cannes, two are being released in France in July right after their premieres. That turnaround time was too fast for us, but we will release them later this year and we’ll use the information we get from the French releases to tailor our strategy for press, marketing, and audience engagement. We are a global market with the internet and availability of so much content, you really have to pay attention to how things are received.”