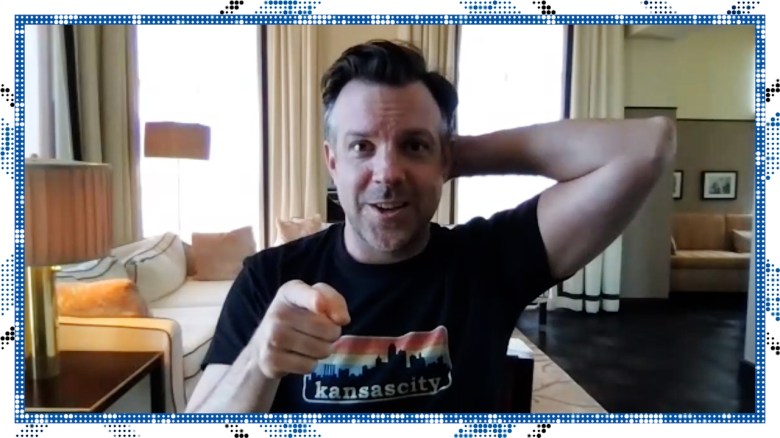 Ted Lasso isn’t a man who’s easily riled. Typically, the AFC Richmond coach is all smiles and appreciation, flashing a double thumbs up at his boss and slapping his lucky “believe” sign for extra encouragement. Ted, played by series co-creator Jason Sudeikis, is a man that’s extremely easy to love, and just as hard to hate — so long as you take the time to get to know him.

Jamie Tartt (played by Phil Dunster) only makes time for himself. The star player and self-assured celebrity is focused on what’s best for Jamie, no matter what, so it was only a matter of time before he and his new coach butted heads.

In “Two Aces,” Episode 6 of the first season, Ted has finally had enough. Jamie, pouting over getting benched, claims to have an injury that will keep him out of practice. Considering the reason Ted sat him in the first place is because Jamie won’t support his teammates, this latest selfish choice sends the happy-go-lucky coach over the edge.

What follows is a nearly word-for-word recitation of Allen Iverson’s impromptu speech during a 2002 press conference, in which the 11-time NBA All-Star was pressed on an issue brought up by his coach, Larry Brown, about missing practice.

Given that “Ted Lasso” is a comedy and that Iverson’s remarks were widely (and mistakenly) mocked, it would be easy to assume the scene is little more than a convenient send-up; that the writers saw a similarity between what they’ve written and Iverson’s speech, leaning in to the latter as a jokey homage for all the sports fans out there. But those who watch the scene closely, who take the time to note Sudeikis’ performance and hear what he has to say, likely recognize this “rant” isn’t about mining a memorable excerpt for easy laughs. It’s not about laughs at all.

“The reference by no means ever played to me as funny,” Sudeikis said in an interview with IndieWire. “Maybe somebody would say the moment is clever, but it was repurposing what I feel was a protest song by Allen Iverson in that moment and turning it into an opera, charged with more emotion.”

To do that, Sudeikis waited. He had followed Iverson’s career since high school, and the actor-writer-producer always knew he wanted to include a scene featuring his speech in “Ted Lasso” — he just assumed it would be during one of Ted’s many press conferences. But after Jamie and Ted had their mid-match fallout, the stage was set for their confrontation over practice.

“I remember a couple of days before, it may have been the night before, I was like, ‘Oh shit.’ It just hit me: the Iverson speech,” Sudeikis said. “And it’s going to be in protest, not comedy.”

“That’s a lesson I feel I learned personally from Monty Python films like ‘Life of Brian’ or ‘Holy Grail.’ I don’t know ‘King Arthur,’ and I was raised Catholic, but I don’t have a deep understanding like those fellas [who went to] Oxford and Cambridge; I went to Fort Scott Community College. So there are levels to those movies where if you know those references, whether it’s religion or the knights of the roundtable, they score on that level — we do those with soccer jokes all the time — but then the other times, they’re just funny; it’s just good wordplay, great acting in a great ensemble.”

That kind of duality gave Sudeikis the confidence to tackle an elusive tone. Not only does the scene carry far more meaning than your typical winking reference, but if Sudeikis plays the speech as a gag, Jamie won’t be affected by it and neither will the rest of the team. If his pivot to anger is unconvincing, the opera meant as a tribute to his teenage hero falls apart. Even his showrunner, Bill Lawrence, had doubts.

“Bill wasn’t sure what to make of it,” Sudeikis said. “He was one of the people to go, ‘Is that the Allen Iverson speech?'[…] He wasn’t sure about it, and I was just like, ‘I think it’ll work.’ That’s just something I got good at from ‘SNL.’ Lorne [Michaels] was always like, ‘If you believe in a thing, fight for it. Tell me why. Explain it.’ And Bill, much like Lorne, was like, ‘OK, if you believe in it, let’s do it.'”

It helped that an element of Iverson’s speech was baked into the episode already. When Ted shows up for work, he’s a bit frazzled. The night prior, he agreed to grant his wife a divorce, and his fragile state sends his head spinning. Ted keeps repeating certain words, like “plan” and “ace,” becoming so fixated on them that they “lose all meaning.” Coach Beard (co-creator Brendan Hunt) points out that Ted’s temporary malady is called semantic satiation, shortly before the coach says “practice” 11 times in his irritated speech to Jamie.

“The whole episode has the theme of semantic satiation,” Sudeikis said. “Ted says ‘practice’ more than he says ‘plan’ or ‘ace,’ and yet every time it’s with this burning hot intensity and intention. That’s because it was boiling under there. Maybe there’s some displacement there because of what happened with him and his wife, but I was like, ‘Oh, this is exactly where it was supposed to be. This is why it hadn’t been in the show. This is why we hadn’t written the scene prior — we didn’t write the ‘comedy’ press conference yet.’ When you stay open to these things, when you don’t try to hold on to anything too tightly — you can’t hold water in a closed fist, you have to cup your hand — so we’re just cupping these moments gently, and it just arrived.”

But there’s still one more key facet to appreciating the scene as a serious moment, not a comic bit. Seven months before Iverson’s press conference, his best friend Rahsaan Langeford was shot and killed. Iverson struggled throughout the basketball season, both on the court and off, and he even alludes to as much during that very press conference.

“I’m upset for one reason: Because I’m in here. I lost. I lost my best friend. I lost him, and I lost this year,” Iverson said later in speech. “Everything is just going downhill for me, as far as just that — you know, as far as my life. And then I’m dealing with this. … My best friend is dead. Dead. And we lost. And this is what I have to go through for the rest of the summer until the season is all over again.”

That part of the press conference wasn’t widely featured in the ensuing news coverage and isn’t included in plenty of clips still floating around the internet today. Many believe Iverson’s perceived incredulity was simply misconstrued grief, and Sudeikis said he also sees Iverson’s speech being “misinterpreted by popular culture.”

“He was angry about being asked about practice — and he says this right then and there — but he’s also dealing with the death of a very close friend,” Sudeikis said. “It’s put him in a box in many people’s minds. […] It’s, ‘Oh, he wasn’t a practice player,’ and no, he’s one of the hardest competing people in sports. To be 6’1” and dominate as he did at that time in the NBA is astounding. He was like, ‘Why are you asking me about this? I’m dealing with real pain, and you’re asking me about practice.”

Not everyone will get all that when they watch the scene. Not everyone will even pick up on the reference to Iverson’s speech in general, and some who do will still misunderstand its meaning. That’s OK by Sudeikis.

“If they get it, they get it, if they don’t, they don’t,” he said. “Because, in that Monty Python way, it’s earned. You want Ted […] to yell at this fucking kid. He needed some hard love. […] Sometimes you follow your gut, your gut leads you, and that’s what it’s doing to Ted — and it works out.”

All these layers also outline what makes Sudeikis’ performance — and “Ted Lasso” overall — so special. It conveys the loss Ted is going through, it unites the team around him, and it unveils aspects of both characters that were previously overlooked. Ted’s repurposed Allen Iverson speech emphasizes how important it is for people to listen to the person across from them; to get to know who they really are before judging too harshly.

That’s what many missed when Iverson tried to express himself — and it’s what “Ted Lasso” is all about.

For more from Sudeikis on Allen Iverson, the phenomenon of “Ted Lasso,” and even a few teases toward Season 2, watch the full video interview above. “Ted Lasso” is available to stream on Apple TV+. Jason Sudeikis is eligible for Best Actor in a Comedy Series at the 2021 Primetime Emmy Awards, and “Ted Lasso” is eligible in all Comedy categories.