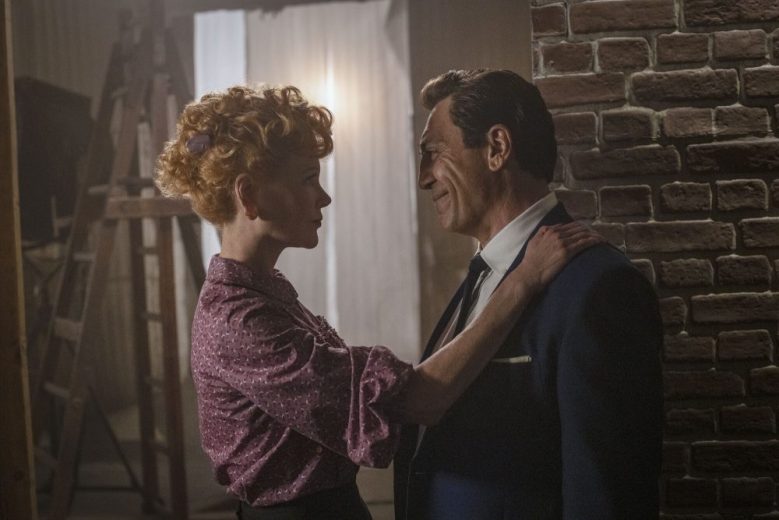 Oscar-winner Javier Bardem (“No Country for Old Men”) began researching Desi Arnaz as soon as he heard there was a movie in development about Lucille Ball and the Cuban singer who rose from nightclub performer to the producer and costar of the hit TV series “I Love Lucy.”

“I was mesmerized by his quality as a comedian, musician, producer, and husband,” he said in a video interview (above), “who deeply loved his wife and wanted to protect her and is a representative of the Latin community in a world where being a foreigner wasn’t as welcome as it is today.”

When Bardem finally read Aaron Sorkin’s script for “Being the Ricardos” (Amazon, December 10), he said, “it’s a page turner. You stand up, you’re so excited, so hooked into the story, the situation, the dialogue. It’s like your body is reacting to it in a physical way.”

Sorkin said he fell in love with the Spanish star on a Zoom call “in a minute and a half. He’s got Desi’s charisma, energy, and sense of humor. He lied all through the meeting. Actors know if you ask, ‘Can they ride a horse?’ to say ‘Yes.’ Toward the end of the meeting, the deal breaker? ‘I’ve been playing guitar since I was three, I banged on the drum kit, I’m a great dancer.’ In the months leading to production he hired someone to teach him how to bang on the conga, became an expert rhumba-er. That’s all him, we’re not sweetening him.”

Bardem said he was abashed as reality set in. “It would be a gift for any actor to play, but it was a poisoned gift,” he said. “You have to embody it now, you have to do it, create an organicity [sic] to those words.”

Nicole Kidman and Javier Bardem in “Being the Ricardos”

Bardem was already shooting “The Good Boss,” the Spanish entry for the Oscars (instead of Pedro Almodovar’s “Parallel Mothers,” which stars Bardem’s wife Penelope Cruz), and would have to shoot “Being the Ricardos” during a pandemic hiatus in shooting “The Little Mermaid,” Disney’s live-action remake in which he plays King Triton.

“I’d have a month to prepare and six weeks to shoot, do some fast research in LA, and jump into Desi,” he said. “It was crazy fast for me. I was so scared and insecure and obsessed that I was not going to able to make it. I talked to Aaron. He said, ‘Don’t worry, you’re good.'”

Bardem and costar Nicole Kidman studied their characters and “I Love Lucy” episodes. “There was a lot of material to follow, to chase, and grab,” he said, “to listen to him, understand him better, and the soul within, what he wanted, what he was capable of doing, what are his shadows and lights. You recreate your version of the character. It doesn’t have to be carbon copy of what he was.”

Bardem talked Sorkin into including Arnaz’ trademark number, “The Babaloo,” and threw himself into learning the congas over Zoom from Santana drummer Walfredo Reyes Jr. “It has this sexual sensual energy that is the base of Desi Arnaz’ energy,” he said. “It’s the guts, the blood, the Cuban roots going through his body. It needs time and work to get this, no magic.”

At heart, “Being the Ricardos” is a love story. While Lucy and Ricky were hugely popular, Ball and Arnaz were “more than celebrities,” said Bardem. “They were heroes of the nation who people followed and were obsessed with. They were showing their own relationship in a funny, modified, washed-up way. There is a price to pay when you do that. Part of the struggle was how to convey that, and how much fiction and reality gets mixed into that. Behind Lucy and Ricky were real people going through a real marriage, which most of the time was opposite to what people are celebrating.”

The movie shows why it was impossible for them to sustain their marriage. When Ball visits Arnaz when he’s performing at Ciro’s, he winds up carrying her purse as she poses for photographers. “He had vanity and ego,” said Bardem. “He was an impulsive, organic person who wanted to be in the spotlight. He believed in his own talent and wanted to share it and express it and make people enjoy it. He was aware that she would be the star of the show, while he knew he was the person behind her, trying to put the business together, and protect her work and creativity. In the movie, when we are talking about the creation of the show in the blocking rehearsals, he steps back — but in the office, I take the reins and make the decisions to protect the show and most of all protect her.”

Next up: waiting for the script for the “Dune” sequel. When Warner Bros. gave the greenlight to shoot in 2022, the first person to contact him was his costar Josh Brolin, who texted: “See you in Jordan, motherfucker!”