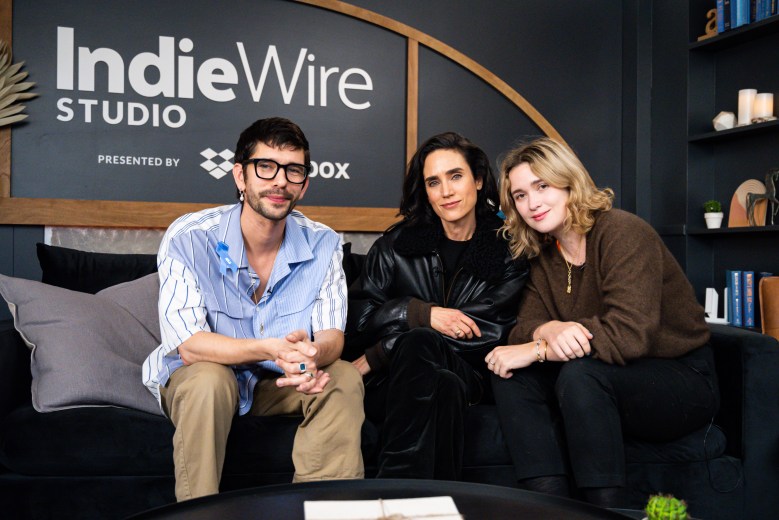 Alice Englert’s directorial debut “Bad Behaviour” is uniquely positioned to touch on some of the biggest cultural issues of 2023. Telling the story of a former child star (Jennifer Connelly) whose search for meaning draws her into the orbit of a shady “guru” (Ben Whishaw) promising enlightenment, the film ends up covering everything from the endless “nepo baby” discourse (which Connelly told IndieWire early in the festival she was mercifully unaware of) to online wellness grifters.

After the film premiered to strong reviews, Englert, Connelly, and Whishaw stopped by the IndieWire Studio at Sundance, presented by Dropbox, to discuss what drew them to take on the unique project. Connelly and Whishaw both praised Englert’s ability to craft three dimensional characters that they could sink their teeth into.

“She’s really complicated, you know? She’s not all good, she’s not all bad, but she does some very, very bad things,” Connelly said of her character, Lucy. “And I loved that Alice wrote a story that had room for these characters to behave in complicated ways as they parse through their issues. I love that it had a sense of humor, I thought it was very funny. And I loved that at the core, I think she was someone who was looking for enlightenment and looking to transcend the suffering and all the pain. She wanted that for herself and she wanted that for her relationship with her daughter. She wanted them to be in a good, healthy place, but it gets so lost in translation because she’s carrying around all this baggage and it’s affecting everything she does. I thought that was very interesting and a moving story.”

Whishaw was also fascinated by the script, and he explained that his genuine interest in spiritual wellness made it a joy to explore both the noble and sleazy sides of his character.

“I really am fascinated by these kinds of people,” Whishaw said. “And not just in a cynical, ironic, hilarious way, although it’s very easy to be that way towards them. I’m really interested in what they’re doing, actually. So in that sense it was easy because I’m interested in what’s happening when someone tells you they’re enlightened. What their experience of the world is, what it would feel like to be at peace.”

The indie film was something of a change of pace for Connelly, who most recently appeared in “Top Gun: Maverick.” With that film’s dominant run at the box office now firmly in the rearview mirror, the actress reflected on what made the sequel such a success.

“I think, honestly, it’s a really well-made movie,” she said. “I think everyone did a really good job. I think Joe Kosinski is a great director. It’s a huge undertaking, and I think it’s hard to make that kind of movie well, and I think he did a spectacular job with it. With what they accomplished, you can feel that the flying sequences are real. It’s a huge achievement and executed so expertly, and I think that’s really exciting to see. The story is really solid, Tom Cruise is extraordinary. It just really came together, and I think the overall feeling of it is celebratory and uplifting and satisfying.”

“Bad Behaviour” premiered at the 2023 Sundance Film Festival. It is currently seeking distribution.