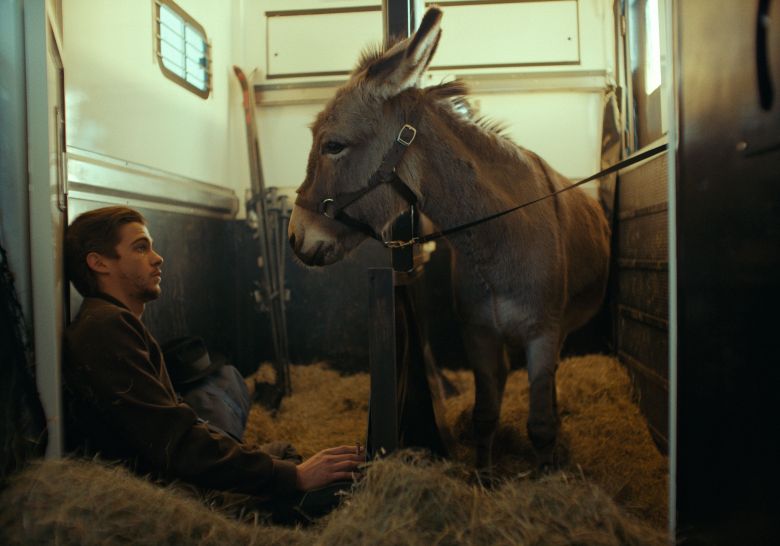 In 1966, Polish director Jerzy Skolimowski’s sophomore feature “Walkover” was a critical hit that landed second place on Cahiers du Cinema’s list of the best movies of the year. When he heard the news, “it was a total surprise to me,” said Skolimowski, now 84. “Obviously, I reacted with a question: ‘What was the first prize?’”

That turned out to be “Au Hasard Balthazar,” the now-classic saga of a wayward donkey directed by celebrated French auteur Robert Bresson. Skolimowski immediately organized a screening. “It’s a great, great movie by an old master,” he said. As a brash young filmmaker, Skolimowski mainly focused on the craft. “I was mostly watching the film with a slightly cynical professional attitude to learn how it was done,” he said. “When the film ended, I found out I had tears in my eyes.”

He realized that the donkey’s experiences, which take some tragic turns, were uninhibited by the artifice of human performance. “That was the biggest lesson I ever got from a filmmaker,” Skolimowski said. “The animal character can actually move the audience stronger than any actor.”

Flash forward 56 years and Skolimowski has made a poignant donkey movie of his own. “EO,” which won the jury prize at Cannes in May, follows the eponymous donkey through a series of misadventures after he’s taken from his beloved owner at a circus. (Poland has chosen it as its official Oscar submission.) The largely wordless odyssey, which Skolimowski wrote with his wife Ewa Piaskowska, maintains the precise audiovisual tapestry found in much of Skolimowski’s late period works, from “Four Nights With Anna” to “Essential Killing.” However, there is a greater sensitivity throughout the movie as it maintains the animal’s point of view on the various humans he encounters on his journeys.

“An animal doesn’t know it is acting,” Skolimowski said. “They just behave.”

Skolimowski cast six donkeys for the part of EO, choosing the Sardinian breed with its light grey fury and distinctive black stripe to ensure there was no visible difference between them. “This is the most beautiful breed of the donkey,” he said. “They are so similar that I bet no audience could judge one from the other. They always have the same expression with those huge, melancholic eyes.”

Early on, Skolimowski sorted out the same filmmaking pattern for each scene: He would start with a master shot before gradually moving in for closeups of the donkey’s face, followed by a point-of-view shot. “It was the magic of cinema,” he said. “On certain details through the donkey’s eyes, the focus changed. … Some additional value was added to it.”

While his crew was setting up various camera angles or taking breaks, Skolimowski would spend time whispering into the donkey’s ears, which replaced the usual process of coaching an actor in between scenes. “We managed to create a kind of bond which for my private use I called ‘co-existence,’” said Skolimowski, who grew up with cats and dogs at home, but no farm animals. “We created a feeling that we are creating a completely independent ensemble of two living organisms, human and animal, different from the rest of the world.”

While “EO” is an unequivocal treatise on animal intelligence, Skolimowski confessed that he hasn’t entirely cut meat out of his diet. “I still sometimes commit a sin — and really, I feel like it’s a sin — when I consume a piece of meat,” he said. “I hope that one day I become a total vegan. Right now, I’m not yet ready for it.”

The vegan subtext of “EO” could give it a greater profile in release than many of Skolimowski’s previous films. However, while his work may not be as widely known in the U.S. as other major European directors, millions of audiences saw him act in 2012’s “The Avengers,” where he appeared as weapons dealer Georgi Luchkov. Needless to say, he has a somewhat different opinion about the prevalence of Marvel movies in today’s film culture than some of his generational peers.

“Thank god that there are so many different types of cinema,” he said. “If we didn’t have the Hollywood productions, we probably wouldn’t appreciate artistic films and vice versa. It’s good to have the choice.”

Watch the full interview with Skolimowski for IndieWire’s Consider This International series above, and check out earlier interviews in the series here.

This Article is related to: Awards and tagged Consider This International, EO, Interviews, Jerzy Skolimowski