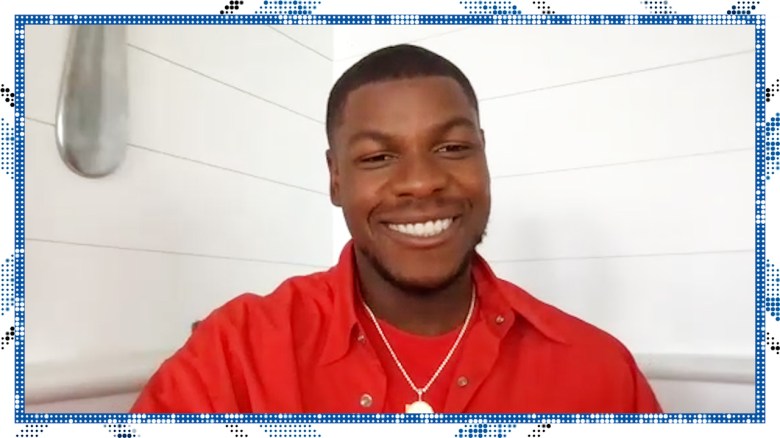 When John Boyega first appeared in “Star Wars: The Force Awakens” it was with all the charm and charisma of a natural born star. The actor, along with co-stars Oscar Isaac and Daisy Ridley, formed a new triad on which the latest leg of the saga would build, worthy successors to Mark Hamill, Carrie Fisher, and Harrison Ford some 40 years previous and a new hope for fans who wanted a return to form for the series.

Several years removed from that moment and Boyega has already exhibited profound growth as an actor and maybe even as a man. His performance as Leroy Logan in the third installment of Steve McQueen’s “Small Axe” anthology series, “Red, White and Blue,” earned rave reviews, as well as a Golden Globe Award, making the actor a real contender when it comes to the Emmy race for Outstanding Supporting Actor in a Limited Series or Television Movie.

An officer with the London Metropolitan Police, Logan founded the United Kingdom’s National Black Police Association in 1999 after years toiling to make serious policing reforms from inside the institution. “Red, White and Blue” focuses on Logan’s early years on the force, his own family’s run-ins with systematic racism with the police, as well as frustrations that Logan encountered when trying to move up within the organization.

In other words, it was just about as much distance as a guy could put between himself and a galaxy far, far away.

More than that, Leroy Logan’s story was real and not just in a non-fantasy, non-science-fiction kind of way. It’s the tale of an actual man who has done actual good within his community and beyond.

Also, the running is real.

That might sound unnecessarily glib, but I assure you it’s not. The film features several scenes that show Logan running, working through his anxieties and frustrations, all of which Boyega must emote while sprinting, a task that might be even more difficult than it sounds. There’s also a scene in which Logan undergoes a “bleep test” with the rest of the police cadets. Otherwise known as a shuttle run, participants are tasked with running sprints at increasing speeds, all focused on beating the bleep. Sadly for Boyega, that task lay exclusively on him.

“It got to a point of being character like, ‘Oh my gosh, like, I’m doing the actual bleep test,” Boyega said in a recent interview with IndieWire, laughing as he recalled the moment. “You know, Steve isn’t doing this sci-fi cut where I just begin the run and the rest of it is a CG copy of me doing the whole sprint. You just do it. You don’t have 16 stunt doubles on this one.”

But while those scenes might have been physically exhausting, there’s no denying that the subject material that the film delved into took its own kind of emotional toll. It was during one of these moments that McQueen displayed the trust and vulnerability necessary to get his actors where they need to be.

Boyega shared a story about an exhausting shooting day, one which included five different scenes, all of which required their own emotional and physical demands. It was late, he was tired, and he was now tasked with filming one of the most emotionally raw scenes of the entire film: Logan seeing his hospitalized father after he’s been brutalized by the police.

“I shared with Steve, ‘I know I’m supposed to be professional, at the top of my game, but acting is emotional manipulation and the body wants what the body wants, I just want my bed. I don’t know how to get this,'” Boyega said. “[McQueen] emptied out the set, got everybody out of there and told me a very personal, private story to him that was reflective of the moment that Leroy has.”

“He finished the story, called everybody back in and — shout out to the crew and other cast who came back in as if they already knew,  they just had so much respect for the energy — and he told me ‘You start whenever you’re ready.’ He came off the set and then we’d done that scene and that’s what you see in ‘Small Axe’ today.”

If we’re honest with ourselves, there are reasons that the filming of “Red, White and Blue” took such a toll. The summer of 2020 saw what appeared to be a global reckoning for institutional racism, particularly at the hands of the police. So much so that Boyega himself spoke out at a huge London event in Hyde Park in support of black lives.

“We are a physical representation of our support for George Floyd.”

It was powerful to see Boyega speak his truth and he was thoughtful when asked about if he felt similarly to Logan when it came to trying to build a bridge towards greater understanding and how his celebrity impacted his decisions. To him, with his father a pastor and community leader, speaking out was just a matter of the environment he was raised in.

“I feel like even if I had 200 followers, I would [speak up], but then it was only after that I’d realized, ‘Oh, yeah, it actually means something when you’re now in a [prominent] position,'” he said. “And that then actually requires you to now dial back and have a strategy. You have to have real goals in place and ethics to actually work at this stuff and help to be a small part of the jigsaw puzzle that brings change, and then use your platform to motivate others to do that as well.”

What’s even more gut-wrenching is the fact that the film was largely shot by the time the 2020 protests took place, making the piece even more timely than previously suspected. Reshoots, however, took place after the George Floyd incident and when Boyega returned to set, some changes had been made to the script.

“We went back to shoot ‘Red, White and Blue’ and the scenes that were added were scenes like when Leroy discovers the horrible stuff written on his door in the changing room and when he comes into the green room and confronts the rest of the officers about not backing him, that was all added after the reshoot period,” Boyega said. “And I don’t know, for me, it felt like I healed from be able to express like that [anger] in that kind of scenario.”